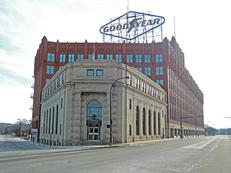 The Historic Rehabilitation Award for major community impact goes to Industrial Realty Group for its work on Goodyear Hall in Akron, Ohio. The developer acquired the 5.5-million-square-foot Goodyear campus in 2009 after proposing to redevelop the inefficient office building so Goodyear could keep its headquarters in Akron. Goodyear Hall was redeveloped as part of the developer’s larger goals of rehabilitating the entire Goodyear campus, revitalizing the immediate neighborhoods and creating more than 7,300 jobs.

By including apartments and the Goodyear Gymnasium as part of the development, Goodyear Hall was “instrumental in retaining Goodyear and its employees in Akron,” in addition to “community access” for local residents, said Whitney LaNasa, a Historic Rehabilitation Awards judge. The revitalized “live, work, play” environment will provide “the monetary investment and psychological lift” to the Akron community with the projected $957 million in new investment to the immediate area, noted judge Ryan Sommers.

While the theater and gymnasium were previously limited to Goodyear employees, the redeveloped spaces are open to the community for the first time, allowing access to nonprofits, schools, churches and local youth organizations. The complex has created thousands of hospitality, food and beverage, nonprofit and construction jobs while providing community space.