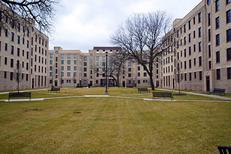 When the 1929 building (with 454 apartments), was closed after 70 years, it sat vacant until the Rosenwald Courts Apartments LP group began rehabilitation work. That included the restoration of the main building’s terra-cotta portals that connect the courtyard to the street, the installation of more than 2,500 windows to match the historic character and the restoration of housing, ground floor commercial space and affordable office space. The development, which is on the site of a targeted retail and redevelopment corridor between two train lines, gives the neighborhood a significant boost.

“This saves an identified ‘most endangered building,’” said John Tess, a Historic Rehabilitation Awards judge. “It’s an immense project bringing together many organizations and ending up as a strong catalyst for the neighborhood, as well as the city of Chicago.”