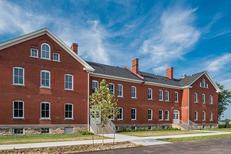 Fort Des Moines Living combined HTCs, low-income housing tax credits and enterprise zone tax credits to help finance the conversion of four 100-year-old Army barracks and two horse stables into 142 income-restricted apartments in Des Moines, Iowa. In addition to providing housing, the development–under the guidance of Blackbird Development–jump-started the economy in an economically depressed area that has seen little development in the past five decades.

There are already plans to revitalize the commercial spaces immediately north of the project site. Fort Des Moines is a national landmark, built in 1901. It was home to the nation’s first African-American officer training school and the base for the first Women’s Army Auxiliary Corps.

“This is a very ambitious project given the size of the buildings and the site,” said John M. Tess, HTC awards judge and president and founder of Heritage Consulting Group. “Rehabilitation of these sites is often difficult and developers often find the obstacles of size and design standards hard to meet. There was a great use of many sources of funds to make the project happen”