This development represents an unparalleled transaction to recapitalize, revitalize and reimagine 875 homes and 10 buildings that were suffering from years of deferred maintenance and lack of funding for capital projects. Currently, NYCHA has $17 billion in unmet capital needs that appear in the form of leaky roofs, mold, broken security systems and other problems throughout the authority's 2,547 buildings. The Section 8 transaction with L+M Development Partners and Preservation Development Partners marks the first step in NYCHA’s transition away from its historic role as a direct-service provider to a partnership-based approach with the private sector.

The deal could not possibly work without LIHTCs.

In addition to addressing all obvious needs, the development team sought to invest in design elements that would transform the buildings and create a living environment that residents would be proud to call home, including: new attractive and distinctive building facades, new lobbies and entrances, new flooring in all common areas, laundry rooms, new hallways, painting and the installation of modern LED lighting throughout.

Three of the properties are what is known as "towers in the park” however, they lacked a park and a fourth building had a back yard was blocked by scaffolding for more than a decade. The developers invested heavily in landscaping to turn concrete and asphalt into real parks that are inviting with plantings, benches, play areas with modern equipment, water features, community gardens, exercise equipment, walking paths, and at one property, a new basketball court with stadium seating. At Saratoga Square a senior building in Brooklyn the developers gutted and renovated a portion of the building into a new modern, light-filled senior center. At Bronxchester Houses in the Bronx, the developers turned a 5,000-square-foot first floor space that had been previously used for appliance and material storage into a community room. A four classroom facility was also carved out for a local social service operator BronxWorks to provide after school, senior and workforce development programs to residents and the community. At Campos Plaza a new and larger community room was built for use by the building’s residents, as well as new retail space. 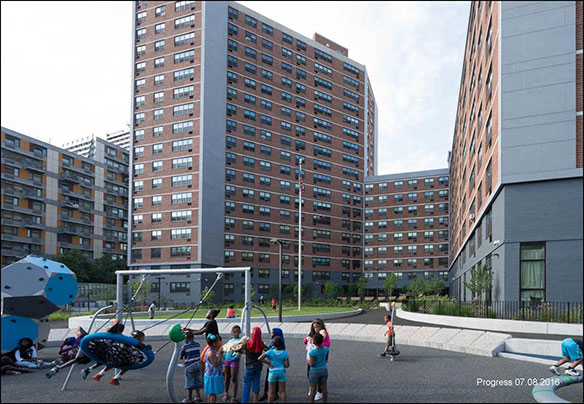