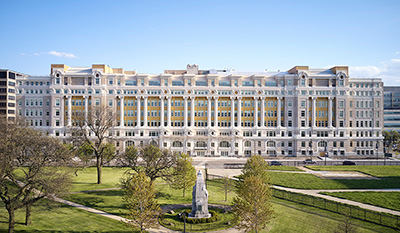 Built in 1916, the property now has the hotel and medical offices, with a food hall, day care and museum space. Developers preserved the architecture of the Old Cook County Hospital as an example of Beaux Arts-style architecture as the only such public hospital in American history.

From its founding until immediately after World War II, the Cook County Hospital was considered one of the world’s great teaching hospitals and for eight decades, it served the city’s indigent population. Located in the heart of the Illinois Medical District, it now better supports the surrounding medical community.