On July 23, a Bipartisan Policy Center (BPC) Housing Commission roundtable on affordable housing discussed a variety of proposals to expand the Low-Income Housing Tax Credit (LIHTC) program to address the significant need for affordable rental housing, and is set to continue discussing these issues, among others, at the BPC’s upcoming 2014 Housing Summit. Although the threat that tax reform poses to LIHTC still looms, the release of House Ways & Means Committee Chairman David Camp’s, R-Mich., tax reform discussion draft proposal committing to preserving the LIHTC has allowed the affordable housing community to pivot from a strictly defensive position and begin to consider proposals to increase LIHTC resources.

Affordable rental housing remains too scarce. As the Joint Center for Housing Studies at Harvard University report “America’s Rental Housing: Evolving Markets and Needs” recently found, “In 2011, 11.8 million renters with extremely low incomes (at or below 30 percent of area median income, or about $19,000 nationally) competed for just 6.9 million rental homes affordable at that income cutoff—a shortfall of 4.9 million units.” Because so many of those affordable rental homes are occupied by higher-income households, the Joint Center for Housing Studies noted in its 2014 State of the Nation’s Housing report that only 3.3 million units are affordable and available to extremely low-income renters.

To address this need, the BPC focused on two proposals. The first was the BPC’s proposal to increase LIHTC allocations by 50 percent. The second was President’s Barack Obama’s proposal to allow the conversion of private activity bonds (PABs) into LIHTCs. This proposal would allow states, at their own discretion, to increase their LIHTC authority by converting some of their private activity bond (PAB) volume cap into LIHTC allocations. The proposal would allow states to convert up to 8 percent of their PAB cap into 9 percent LIHTCs. For each $1,000 of bond cap “surrendered” by the state, it would receive an amount of 9 percent LIHTCs equivalent to $1,000 times the applicable percentage of the 4 percent LIHTC from December of the previous year.

Advocates of the PAB conversion proposal argue that because in recent years states have forgone a significant amount of the bond cap, the proposal would be an effective way to increase affordable rental housing. Those more skeptical of the proposal argue that it doesn’t significantly increase overall resources available for affordable rental housing because, as interest rates rise and the market for PAB recovers, more of the cap will be used in the future, leaving less unused cap for states to convert into LIHTC. The Council of Development Finance Agencies (CDFA) bond data from 2000-2013 and the recent trends in PAB markets may provide some context for this debate.

States aren’t required to utilize their entire bond cap every year. They are allowed to carry over unused PAB cap for three years. Every year, at least a few states abandon some of the PAB volume cap they have carried over because they are unable to utilize it before it expires. Before the passage of the Community Renewal Tax Relief Act of 2000, which enacted a one-time 40 percent increase in per-capita allocations (spread over two years) as well as established inflation adjustments, PAB volume cap wasn’t adjusted for inflation. As inflation rose over the years, the cap became worth less and less in real dollars. Therefore by 2000, few states had accumulated significant carryover, and as such, 45 states had no carryover abandoned. The financial crisis in 2008 and the collapse of the housing market significantly reduced states’ abilities to issue PABs. The CDFA’s data shows that the number of states with no carryover abandoned in 2008 was 33; in 2009 it was 23.

The financial crisis made investors and lenders significantly more risk averse, reducing their demand for a variety of bond instruments. This, in turn, reduced states’ abilities to issue PABs. Again, referring to the CDFA’s PAB data, in 2009, the total amount of carryover abandoned was more than double the amount abandoned in 2008, with $2.3 billion carryover abandoned. Aside from a brief pause in 2012, carryover abandoned has continued to grow every year.

Advocates of the bond cap conversion proposal argue that the prevalence of abandoned cap means that the proposal would be utilizing mostly, if not entirely, unused cap.

The market remained weak in 2009, but began to recover in 2010. The PAB data for 2000-2013 provided by the CDFA shows that multifamily housing bond issuance hit its post-crisis peak in 2012, with roughly $5 billion in bonds issued. This issuance total declined only slightly in 2013, falling to roughly $4.7 billion in bonds issued. This outcome suggests that while the multifamily housing bond market is recuperating, the road to recovery remains yet ahead.

Bond conversion proposal critics note that multifamily bonds are just one of many eligible uses for PABs to argue that bond conversion may not work as planned because in many cases, housing finance agencies (HFAs) are not the ones making decisions about PAB allocations among eligible uses within states. 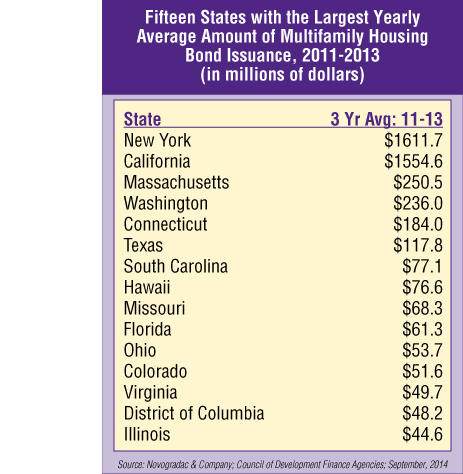