In most years, some states don’t use all of their allocated LIHTCs. The unused housing credit carryover for a state for any year is the excess of the unused state housing credit ceiling for the previous year over the total housing credit dollar amount allocated for the current year. The five states with the most unused authority contributing to the national pool in 2012, the year with the most recent data available, were: 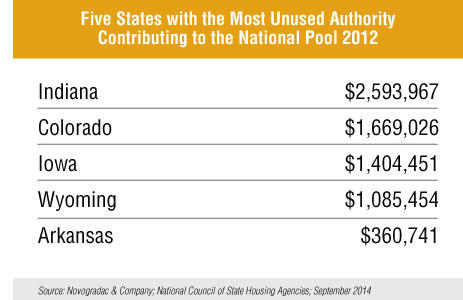 Overall, the changes to the 2014 national pool from the 2013 national pool are modest. Revenue Procedure 2014-52 describes how the approximately $2.6 million of unused LIHTCs in 2014 was distributed among the 35 states and Puerto Rico that had completely used their 2013 LIHTC authority. The national pool in 2014 was equal to about 0.4 percent of the total new per capita allocation authority in 2014.

The five states to receive the most unused LIHTC allocation from the national pool in 2014 were: 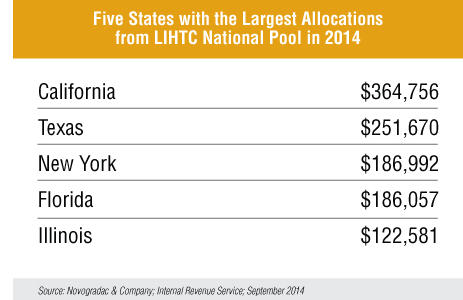 Even though LIHTC demand is robust at the national level, the allocation process at the state level sometimes results in small amounts of unused authority; these small amounts are often what end up being reallocated through the national pool. Some states tend to utilize all of their LIHTC allocation consistently every year, just as some states tend to not utilize all their LIHTC allocation consistently every year. This consistency causes approximately the same percentage of credits out of the total yearly LIHTC authority to go into the national pool most years. 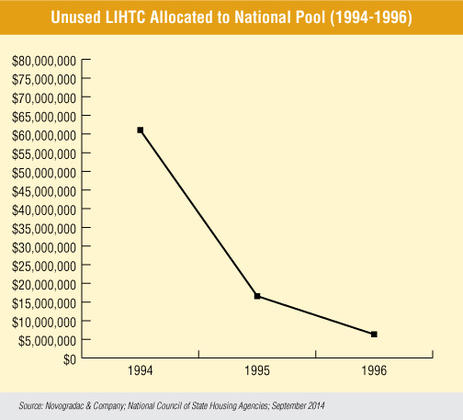 The national pool shrank considerably between 1994 and 1996 for a couple reasons. The LIHTC was made permanent in 1993, making LIHTC investments more appealing, increasing demand for credits and reducing the amount of unused LIHTC. In 1995, the Federal Financial Institutions Examinations Council (FFIEC), the council of bank regulators, updated the Community Reinvestment Act (CRA) regulations. These updates included new provisions that clarified incentives for banks to make LIHTC investments, further driving down the amount of unused LIHTCs and shrinking the national pool. Because of the changes resulting from making the LIHTC permanent and the CRA regulations, 1996 is considered the first full year of the modern age of the LIHTC.

Examining almost two decades’ of national pool data highlights both elements of stability and adjustment. California, Texas, New York and Florida are on the list of five of the states that received the most unused LIHTC from the national pool both in 2014 and cumulatively from 1996 to 2014. Because these states have large populations and routinely utilize their full LIHTC authority, it’s not surprising they received large amounts of unused LIHTC. 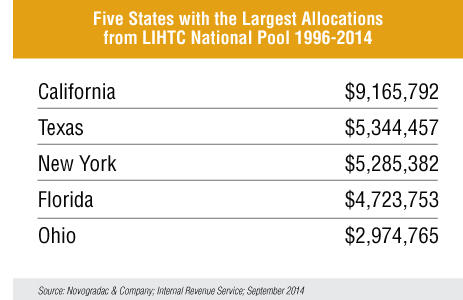 In more recent years the amount of unused LIHTC in the national pool has increased modestly each year since 2012, staying roughly within the 3 percent range. The lack of wild swings in recent data contrasts with more variable patterns during the financial crisis that began in 2008. Because the financial crisis dramatically decreased the tax appetite for LIHTC investors, the amount of unused LIHTCs increased. But, thanks in part to the Section 1602 tax credit exchange program created as part of the American Recovery and Reinvestment Act of 2009 that allowed states to exchange 2008 and 2009 LIHTCs for cash grants, the amount of unused LIHTCs decreased. The relative stability of recent years indicates the national pool has returned to a steady trend of growth that closely tracks the increases in total LIHTC allocations.

In addition to indicating how well states are utilizing LIHTCs, it is important to note that having the national pool allocation ensures that the scarce LIHTC resource is used by those states that most need it. This provides a reward to those states, while giving an incentive to states to use their full allocation. Such a mechanism doesn’t apply universally through other tax expenditures or discretionary spending programs; for example, as discussed here previously, private activity bond (PAB) allocations expire after three years and are not reallocated to states that fully utilize their PAB authority.