Overall, the changes to the 2015 national pool from the 2014 national pool are modest. Revenue Procedure 2015-49 describes how the approximately $2.6 million of unused LIHTCs in 2015 was distributed among the 30 states and Puerto Rico that had completely used their 2014 LIHTC authority. The national pool in 2015 was equal to about 0.3 percent of the total new per capita allocation authority in 2015.

The five states to receive the most unused LIHTC allocation from the national pool in 2015 were: 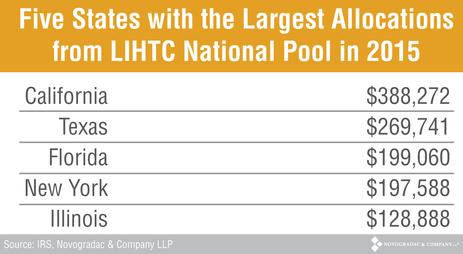 The five states receiving the most unused LIHTC from the national pool are unchanged from 2014.

However, the national pool as a whole grew by only $1. The national pool’s growth – or lack thereof – contrasts with the $66 million increase in total per capita LIHTC allocations for 2015, suggesting demand for LIHTCs was stronger in 2015.

Even though LIHTC demand is robust at the national level, the allocation process at the state level sometimes results in small amounts of unused authority; these small amounts are often what end up being reallocated through the national pool. Some states tend to use all of their LIHTC allocation consistently every year, just as some states tend to not use all their LIHTC allocation consistently every year. This consistency causes approximately the same percentage of credits out of the total yearly LIHTC authority to go into the national pool most years.

In addition to indicating how well states are using LIHTCs, it is important to note that having the national pool allocation ensures that the scarce LIHTC resource is used by those states that most need it. This provides a reward to those states, while giving an incentive to states to use their full allocation. Such a mechanism doesn’t apply universally through other tax expenditures or discretionary spending programs; for example, as discussed here previously, private activity bond (PAB) allocations expire after three years and are not reallocated to states that fully utilize their PAB authority.