2016 Capital Magnet Funds Awarded, Amount Available Could Grow by More than 30 Percent in 2017

The U.S. Treasury’s September 22 announcement of $91.5 million in Capital Magnet Fund (CMF) awards to 32 organizations was a milestone: the first such announcement since the program’s funding was suspended after just one round of allocations. What’s more, based on Novogradac & Company’s projections, even more funding will be available under this program next year.

There were 125 applications requesting $609 million in CMF funds–nearly six times the amount available. The 32 organizations ultimately awarded CMF grants included 23 community development financial institutions (CDFIs) and 9 nonprofit organizations. The grantees are required to leverage at least $900 million in public and private investment (at least $10 of housing and economic development investment for every $1 in federal funds). The grantees plan to develop 17,000 affordable housing rental units, and 93 percent of all housing units developed will be available for people earning 80 percent or less of the area median income (AMI). Half of all rental units will be developed for very low-income and extremely low-income persons (earning 50 percent AMI or below).

The CMF program and the National Housing Trust Fund (HTF) were created as part of the Housing and Economic Recovery Act of 2008 with the task of providing grants to CDFIs and qualified nonprofit housing organizations to finance affordable housing activities as well as related economic development activities and community service facilities. The CMF is financed by 4.2 basis points of annual new business purchases by Fannie Mae and Freddie Mac, and is administered by Treasury’s CDFI Fund via national competition. CMF was suspended in December 2008 almost as quickly as it was created, when the Federal Housing Finance Agency (FHFA), the regulator for Fannie Mae and Freddie Mac, suspended contributions because of concerns about their fiscal solvency. The CDFI Fund made one CMF allocation, in 2010, funded by a one-time appropriation. During that round, the CDFI Fund awarded $80 million to 23 nonprofits and CDFIs, generating more than $1 billion in combined investment. That allocation round created nearly 10,000 affordable homes, 8,813 of which are rentals. Additionally, 15 economic development projects that housed businesses, child care facilities, homeless counseling services, and healthcare services were supported with the 2010 allocation round.

The suspension on Fannie Mae and Freddie Mac allocations was lifted in December 2014, when FHFA instructed them to begin setting aside and allocating funds to both the HTF and CMF through calendar year 2015. The U.S. Department of Housing and Urban Development (HUD) announced $174 million for its HTF allocations to states in May. 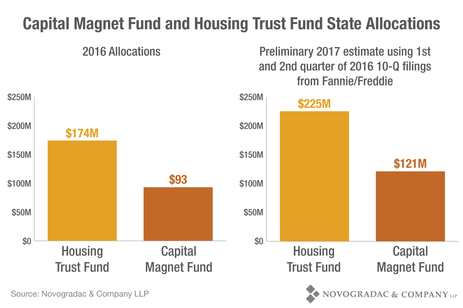