According to the Senate Appropriations Committee press release, the Homeland Security section of the law provides $22.54 billion for border security, including $1.375 billion for construction of 55 miles of new physical barriers along the southwest border in U.S. Border Patrol’s highest priority areas. The barrier funding was notably less than the $5.7 billion the president wanted, and when signing the legislation, the president declared a national emergency to authorize the border wall funding. Such a declaration will undoubtedly lead to litigation, but such action will not affect housing and community development funding. However, the declaration could reprogram funding authorized for disaster recovery, which will likely tie up those funds until the litigation is resolved.

For the U.S. Department of Housing and Urban Development (HUD), the omnibus would provide gross appropriations of $53.8 billion, a $1.02 billion (1.9 percent) increase from FY 2018, and $12.5 billion (30.4 percent) more than the administration’s FY 2019 request, $585 million (1.1 percent) more than the FY 2019 Republican-led House THUD bill, but $275 million (0.5 percent) less than the Senate FY 2019 THUD bill. In general, the omnibus bill’s funding level sustains the major HUD funding increases enacted in FY 2018, and provides a few programs with increases.

This overall funding allocation was made possible by the Bipartisan Budget Act of 2018, which set a cap of $597 billion for FY 2019 nondefense spending, which is $18 billion (3.1 percent) more than the FY 2018 cap, but $57 billion (10.6 percent) more than the administration’s FY 2019 request. However, given the return of tight defense and nondefense spending caps with sequestration for FY 2020, Congress will need to enact a new budget deal to enable the FY 2020 appropriations process to move forward. 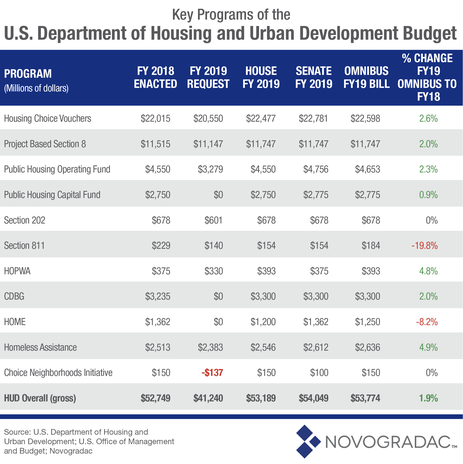 The omnibus provides $11.7 billion for Project-Based Rental Assistance, which is $232 million (2 percent) more than FY 2018, $600 million (5.4 percent) more than the FY 2019 administration’s request and the same as the GOP-led House and Senate bills. Despite the disruption from the 35-day partial government shutdown, the funding level should be enough to renew expiring contracts. The legislation rejects the administration’s budget proposals to establish $150 minimum rents; require increased tenant contributions toward rent from 30 percent of adjusted family income to 35 percent of gross family income; and institute other proposals to achieve savings from HUD’s rental assistance programs.

As noted for project-based rental assistance, the legislation does not adopt the rental assistance reforms from the administration’s budget request. For the HUD-Veteran Affairs Supportive Housing (HUD-VASH) program, the omnibus provides $44 million and $4 million of such funding is reserved for Native American veterans, $1 million less than FY 2018, the GOP-led House and Senate bills. The omnibus also provides $85 million for Tenant Protection Vouchers, equal to FY 2018 and the Republican-led House bill, but $55 million (39.3 percent) less than the administration’s request.

Like the GOP-led House bill, the omnibus does not include the administration’s request to eliminate the cap on the RAD program, nor does it authorize it as a permanent program. The FY 2018 omnibus increased authorization from 225,000 public housing units to 455,000 public housing units and extended program authorization for public housing conversions to 2020. The omnibus bill does not provide incremental funding to facilitate such conversions, as proposed by the administration’s request ($100 million) or the Senate ($4 million) in its FY 2018 HUD spending bill.

The omnibus does not eliminate Community Development Block Grant (CDBG) formula grants and the HOME Investment Partnerships Program (HOME), as proposed by the administration’s request. Furthermore, it provides $3.3 billion for CDBG (which is $65 million or 2 percent more than FY 2018 and equal to the GOP-led House bill) and $1.25 billion for HOME (which is $112 million or 8.2 percent less than FY 2018 and the Senate bill but $50 million or 8.2 percent more than the Republican-led House bill).

The bill does not agree to eliminate the Choice Neighborhoods Initiative, which is designed to comprehensively revitalize high-poverty public and assisted housing communities, as proposed by the administration’s request, which also called for rescinding $137 million in FY 2017 funding. Instead, the bill provides $150 million, equal to FY 2018 and the GOP-led House bill, but $50 million (50 percent) more than the Senate bill.

The bill does not include the administration’s proposal to eliminate the Housing Trust and Capital Magnet Funds and the Fannie Mae and Freddie Mac assessments that fund them. HUD announced May 1 $266.8 million for the 2018 Housing Trust Fund (HTF) allocations. The U.S. Treasury’s Community Development Financial Institutions (CDFI) Fund announced Feb. 13 more than $142 million in awards for the 2018 round of the Capital Magnet Fund (CMF). Indeed, the administration had proposed to rescind the $142 million expected to be available, but the Senate rejected the rescission. Housing government sponsored enterprises (GSEs)—Fannie Mae and Freddie Mac—assessments to fund both programs are not discretionary appropriations, and housing finance reform legislation is expected to address whether Congress wants to continue them. Senate Finance Committee Chairman Mike Crapo, R-Id., released an outline of his housing finance reform proposal, which if enacted would increase funding for them. Mark Calabria, currently the chief economist for Vice President Pence, has been nominated to be the permanent Federal Housing Finance Agency (FHFA) director, and the Senate Banking Committee held a Feb. 14 hearing on his nomination. Calabria is expected to be confirmed, but it is unclear when. During his hearing, Calabria pledged to continue the funding for the HTF and CMF “within the confines of the statute,” and said he believed the economic conditions in the statutory provision enabling the FHFA director to suspend the GSE contributions are unlike to occur.

The omnibus bill includes $250 million for the CDFI Fund, level with FY 2018 and the Senate bill, but a $236 million (94.4 percent) increase from the administration’s FY 2018 (and FY 2019) request and $24 million (15.7 percent) increase from the Republican-led House bill. Congress rejected the administration’s proposals to eliminate all grant funding and only provide $14 million in administrative funding for the new markets tax credit and CDFI Bond Guarantee programs. Within this amount, the bill provides $160 million for financial awards and technical assistance. The omnibus also provided $500 million in guarantee authorization level for the CDFI Bond Guarantee program level with FY 2018.

Now that FY 2019 appropriations are passed, Congress and the administration will turn to FY 2020. Because of the shutdown, the administration delayed the release of its FY 2020 budget request to mid-March. Press reports indicate that the administration is likely to seek 5 percent cuts to most federal agencies, but Congress is not likely to agree to such cuts. However, as mentioned previously, Congress will need to enact another budget deal to avoid the tight spending caps from the Budget Control Act. Furthermore, on March 1, the debt ceiling suspension expires. Treasury is expected to employ “extraordinary measures” to avoid breaching the debt limit, but according to the Bipartisan Policy Center, Treasury will only be able to do so until August/September, necessitating action by Congress to suspend or increase the limit again.

The shutdown also scuttled efforts to address tax extenders, tax corrections and disaster tax relief at the end of the last Congress, some of which had been planned to be addressed in the final FY 2019 spending bill. The Senate attempted to add tax extenders to the FY 2019 appropriations but was unsuccessful. House Ways and Means Committee Chairman Richard Neal, D-Mass., and Senate Finance Committee Chairman Chuck Grassley, R-Iowa, have both expressed their intent to consider tax extenders early this year, but it appears that it will likely need to be added to a “must-pass” piece of legislation, such as a budget deal to increase the spending caps, to be passed. Grassley in particular is strongly in favor of extending the biodiesel tax credit, giving him an incentive to continue to push for extenders as soon as possible. An extension of the new markets tax credit (NMTC) and a minimum 4 percent rate for the low income housing tax credit (LIHTC) could be included with extenders.