On Dec. 17, the House passed H.R. 1865 and H.R. 1158, the two comprehensive fiscal year (FY) 2020 spending bills covering $1.3 trillion in funding for all federal agencies, including Treasury and the U.S. Department of Housing and Urban Development (HUD), averting a potential federal government shutdown that would have begun after the temporary stop-gap funding bill, the continuing resolution (CR) was scheduled to expire on Dec. 20.  The Senate is expected to pass both FY 2020 spending bills soon and the president is expected to sign the legislation before the CR expires at the end of the week

This overall funding allocation was made possible by the Bipartisan Budget Act of 2019 (BBA19), which set a cap of $622 billion for FY 2020 nondefense spending, which is $25 billion (4.2 percent) more than the FY 2019 cap, but $79 billion (14.5 percent) more than the FY 2020 nondefense cap prior to the BBA19. As noted above, this budget agreement was finalized after the House set its FY 2020 spending allocations for each bill, so it was not surprising that the final program funding levels were closer to the Senate bill rather than the House bill. 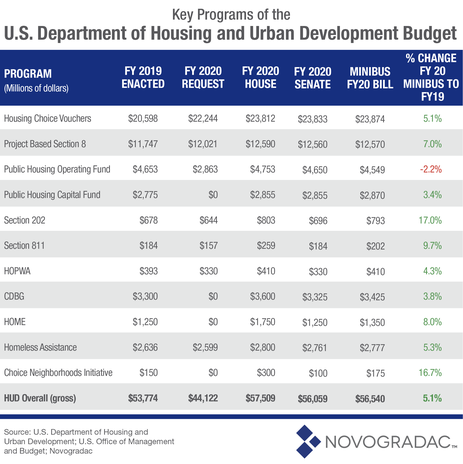 As noted for project-based rental assistance, the legislation does not adopt the rental assistance reforms from the budget request. For the HUD-Veteran Affairs Supportive Housing (HUD-VASH) program, the omnibus provides $41 million and $1 million of such funding is reserved for Native American veterans, $3 million less than FY 2019. The legislation also provides $75 million for Tenant Protection Vouchers, $10 million less than FY 2019 but note that there is $110 million in carryover funding. The final bill also provided another $25 million to a mobility housing voucher demonstration first funded in the FY 2019 appropriations bill.

The final legislation would provide $410 million for the Housing Opportunities for Persons with AIDS (HOPWA) program to provide housing and supportive services, equal to House bill, $17 million (4.3 percent) more than FY 2019, and $80 million (24.2 percent) more than the request and the Senate bill.

The final bill does not agree to eliminate the Choice Neighborhoods Initiative, which is designed to comprehensively revitalize high-poverty public and assisted housing communities, as proposed by the administration’s request.  Instead, the bill provides $175 million, $25 million (16.7 percent) more than FY2019, $75 million (75 percent) more than the Senate bill, but $125 million (41.7 percent) less than the House bill.

The final bill does not include the administration budget’s proposal to eliminate the Housing Trust and Capital Magnet Funds, and the Fannie Mae and Freddie Mac assessments that fund them. HUD announced May 1 $247.7 million for the 2019 Housing Trust Fund (HTF) allocations. The U.S. Treasury’s Community Development Financial Institutions (CDFI) Fund is expected to announce about $121 million in awards for the 2019 round of the Capital Magnet Fund (CMF) in January or February of 2020.  Federal Housing Finance Agency (FHFA) Director Mark Calabria pledged to continue the funding for the HTF and CMF “within the confines of the statute,” and he believed the economic conditions in the statutory provision enabling the FHFA director to suspend the GSE contributions are unlike to occur.

The final appropriations bill includes $262 million for the CDFI Fund, $12 million (4.8 percent) more than FY 2019, $38 million (12.7 percent) less than the House bill, and $11 million (4.4 percent) more than the Senate bill, but a $248 million increase from the FY 2019 request.  Congress rejected the administration’s proposals to eliminate all grant funding and only provide $14 million in administrative funding for the new markets tax credit (NMTC) and CDFI Bond Guarantee programs.  Within this amount, the bill provides $165.5 million for financial awards and technical assistance.  The omnibus also provided $500 million in guarantee authorization level for the CDFI Bond Guarantee program level with FY 2019.

Despite the best efforts of low-income housing tax credit (LIHTC) champions, one of the leading proposals from the Affordable Housing Credit Improvement Act (AHCIA, S. 1703, H.R. 3077) to establish a 4 percent minimum rate for tax-exempt private activity bond-financed developments was not included in year-end tax legislation attached to final FY 2020 appropriations.  However, Congress did include a nearly $1 billion allocation of disaster LIHTC authority for 2017-18 California wildfires as part of California’s 2020 LIHTC state ceiling, which represents nearly a doubling of California’s 9 percent LIHTC authority.  There was an extension for the NMTC to 2020, and an increase to $5 billion from $3.5 billion in annual NMTC allocation authority.  Lastly, the section 45L new energy efficient home tax credit of up to $2,000 per unit, and the section 179D commercial property energy efficiency deduction, which can be used for multifamily housing energy efficiency upgrades was retroactively extended from its original expiration at the end of 2017 through to the end of 2020.

As noted above, the Senate is poised to pass and the president to sign both FY 2020 appropriations bills before current funding authority expires on Friday. This legislation represents the final likely legislative vehicle for community development-related tax incentives for 2019, and the outlook for such a vehicle next year during 2020, a presidential election year is uncertain at best. The House is poised to impeach the president before recessing for the holidays, leaving the Senate to conduct an impeachment trial starting in January.  Given the requirement for 67 votes to convict the president, the Senate is expected to acquit or dismiss the trial at the end of its deliberation. The aftermath of the impeachment and the dynamic of the presidential caucuses and primaries that start on Feb. 3 is not expected to be conducive to legislation that could be a vehicle for passing tax proposals.

That being said, House Ways and Means Committee Chairman Richard Neal, D-Mass., has expressed his intent to consider comprehensive infrastructure legislation in 2020, which could provide an opportunity to advance affordable housing and community development-related tax incentives, including a new federal infrastructure tax credit, permanence for the NMTC, and many, if not all, AHCIA provisions, through the House floor and represent the opening bid for such legislation in early 2021, when it likely would have a better chance at enactment in the first term of a new Democratic president or second term of a newly re-elected president Trump.  Stay tuned.