Novogradac projects more than 65,000 additional rental homes could be financed from 2019 to 2028 if a provision is enacted to establish a minimum 4 percent floor for low-income housing tax credits (LIHTCs) generated by tax-exempt private activity bonds issued for multifamily housing. This would greatly enhance the LIHTC, an incentive that the National Council of State Housing Agencies’ 2016 Factbook reports is already responsible for the creation of more than 1 million affordable rental homes from 1987 through 2016.

The proposal to establish a permanent 4 percent floor was overshadowed when the Affordable Housing Credit Improvement Act was first introduced in 2016, as the proposed 50 percent increase in low-income housing tax credit (LIHTC) allocation authority received most of the attention. But the potential posed by a minimum 4 percent LIHTC floor, which would parallel the establishment of a 9 percent minimum rate that was enacted by the Protecting Americans from Tax Hikes (PATH) Act in Dec. 2015, should not be overlooked.

Under the Affordable Housing Credit Improvement Act (S.548, H.R. 1661), LIHTC developments financed by tax-exempt private activity bonds will generally have three sources of additional capital as a result of the minimum 4 percent LIHTC rate. First, the monthly “4 percent” rate has hovered around 3.2-3.3 percent. If a permanent 4 percent rate is enacted, additional equity will be generated even if states do not increase the volume of 4 percent allocations because of the additional LIHTCs resulting from the 70-80 basis point increase in the annual LIHTC rate.

The example pro forma below shows that 17 percent more equity is available if a 4 percent floor is established and makes the potential development financially feasible.

Furthermore, there will likely be more 4 percent LIHTC allocations because the increased amount of equity available will make more affordable rental housing developments financially feasible. Finally, there will likely be more debt available as a result of greater multifamily housing bond issuance triggering the increased LIHTC allocations. Increasing multifamily housing bond issuance and having more equity available per development with the minimum 4 percent rate would make more LIHTC developments financially feasible. The resulting additional equity and debt financing could be used to finance a greater number of affordable rental homes.

For this analysis Novogradac assumed that states would increase multifamily bond issuance in response to the additional equity and greater financial feasibility. Furthermore, this analysis assumed the absolute amount of soft subsidies going to tax-exempt bond properties would remain unchanged. To the extent that there is less deferred developer fee, that is offset with more taxable bond financing.

Finally, Novogradac assumed that the amount of eligible basis per unit is going up by the projected inflation rate provided by the Congressional Budget Office (CBO) in order to reflect an increase in the cost of development. 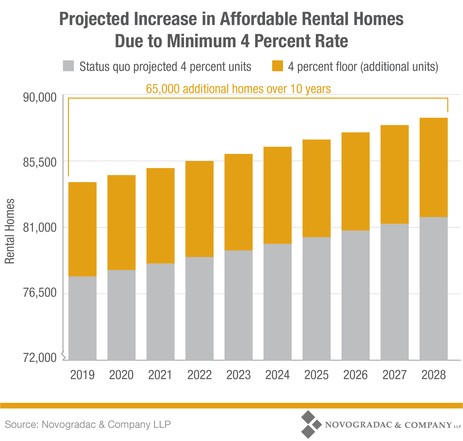 And this increased affordable rental housing production would have significant economic impacts.

The 12 states that would most benefit from the minimum 4 percent floor are:

As mentioned in an earlier blog post about the Affordable Housing Credit Improvement Act provisions affecting basis boosts, the additional equity produced by the enactment of the 4 percent floor could help bond-financed developments access high opportunity areas. As discussed in that post, high opportunity areas have higher land costs. Because the cost of land does not generate tax credits it is difficult for a property to become financially feasible in areas with higher land values. However, a portion of the additional equity generated by the 4 percent floor could go towards the cost of land in high opportunity areas.