As affordable housing developers know all too well, Congress has allowed a key provision of the American Taxpayer Relief Act, the 9 percent credit rate floor, to expire for low-income housing tax credit (LIHTCs) allocations received after Dec. 31, 2014. This means that the 70 percent present value tax credit rate has returned to being a completely floating rate, redetermined each month by Treasury.

The floating rate is problematic for at least two basic reasons. First, it creates uncertainty for affordable housing developers about the financial feasibility of their developments. A development that is financially viable at a certain level of tax credits, based on the then current tax credit rate, may not be viable if the tax credit rate falls during the development stage. As such, before proceeding with a particular development, affordable housing developers need to weigh the risk of the floating rate declining during the development phase, making their development infeasible. Second, and in many ways, more importantly, a percentage rate that is lower than 9 percent decreases the amount of equity that a credit allocating agency can make available to a given property. The calculation below illustrates this. 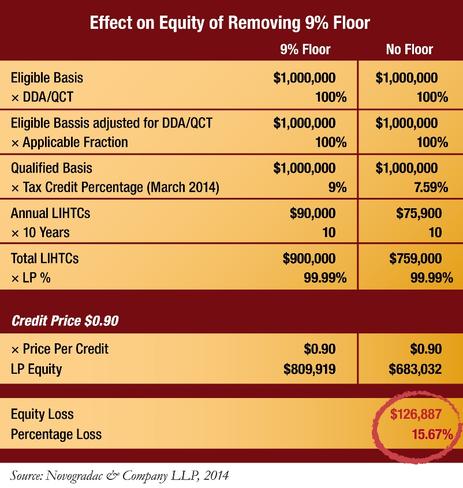 The fixed rate floor is an important tool for credit allocating agencies because it gives them the option to allocate more tax credits to developments that accomplish certain socially beneficial goals, such as serving lower income families and providing additional amenities and social services. The inability to allocate more tax credits translates into a loss of project equity, and consequently, more difficult tradeoffs for the affordable housing community.

Larger amounts of equity allow developers to build physical amenities, such as community rooms, and community service facilities. These amenities improve the quality of life for low-income residents and are often vital for providing a sense of community and aiding broader community development goals.

Another major tradeoff stems from the effect lower equity amounts have on the level of debt financing. With less equity available, developers may need to borrow more to cover the equity shortfall. This additional borrowing adds additional monthly interest costs to the final equation, which the developer must find a way to afford. Options include cutting the amount of social services, such as workforce training or career counseling, after school programs for kids, life coaching, substance abuse recovery programs, or computer or financial literacy workshops. Furthermore, higher interest costs can affect the level of rents charged. LIHTC property owners often charge below the maximum allowable rents, which allows them to serve lower income levels than required by statute. But higher debt service costs can force them to raise rents and seek out higher income tenants, squeezing out the more vulnerable, lower income families. Ultimately, the equity shortfall may be so problematic that the developer will be unable to build in areas with the greatest need.

Policy analysts have observed that a lower credit percentage means the same amount of credits will support more affordable rental housing units. Furthermore, House Ways and Means Committee Chairman Dave Camp’s tax reform proposal took this one step further, noting that eliminating the 30 percent basis boost would allow existing credits to support yet even more rental housing units. As this discussion points out, those additional units come at a cost; the cost being fewer amenities and fewer social services for affordable housing residents, as well as a diminished capacity to serve lower income families. Given the local nature of affordable housing needs, these tradeoffs should not be made in Washington, D.C., rather they should remain at the credit allocating agency level.

May 4, 2021: What CDEs and Qualified Businesses Should Be Doing Now to Prepare for the Next NMTC Application Round
Posted on May 4, 2021
April 27, 2021: Maximizing the Benefit of State and Local Tax Incentives and Exclusions for Renewable Energy Properties
Posted on April 27, 2021
April 20: 2021: Understanding Provisions of the Affordable Housing Credit Improvement Act of 2021
Posted on April 20, 2021
END_OF_DOCUMENT_TOKEN_TO_BE_REPLACED