In addition to LIHTC and MIHTC Proposals, DASH Act Includes Bipartisan Neighborhood Homes Tax Credit that Could Finance the Construction, Rehabilitation of a Half Million Owner-Occupied Homes

The Decent, Affordable, Safe Housing for All (DASH) Act, announced by Senate Finance Committee Chairperson Ron Wyden, D-Oregon, Aug. 18 in advance of its formal introduction in September, would not only enhance financing of affordable rental housing through low-income housing tax credit (LIHTC) expansion and enhancement proposals and the creation of the middle-income housing tax credit (MIHTC), but also aims to support homeownership opportunities. Realizing that not only do American renters need assistance but so too do many first-time homeowners, especially those in distressed areas, the DASH Act includes a first-time homebuyer refundable credit and the Neighborhood Homes Investment Act (NHIA, H.R. 2143, S. 98), which would establish a new tax credit to build or rehabilitate owner-occupied homes in distressed areas. In those communities where the cost of new construction or acquisition and substantial renovation of owner-occupied homes is more than the market value of the property, the Neighborhood Homes Tax Credit (NHTC) would help to bridge the financing gap.

This post is part of a series analyzing the major provisions of the DASH Act. Recent Notes from Novogradac posts detail the affordable rental housing provisions to enhance the LIHTC and the creation of a MIHTC, which would finance the creation and rehabilitation of rental homes affordable to households that earn slightly more than the allowable LIHTC income requirements. A fourth post will examine the renters tax credit and housing spending proposals. Additional details on the various housing provisions can be found in the bill text, bill summary and detailed section-by-section summary.

The NHTC is just the latest attempt to improve homeownership rates through the tax code. George W. Bush included a Single-family Homeownership Tax Credit in his 2004-2005 annual budget requests that would provide builders of affordable homes for middle-income purchasers with a tax credit awarded by state housing agencies. At the time, it was estimated an additional 50,000 homes would be created annually. In both the 108th and 109th Congresses (2003-2006), then Reps. Rob Portman, R-Ohio; Ben Cardin, D-Maryland; and Tom Reynolds, R-New York, introduced the Renewing the Dream Tax Credit Act, which would have established a homeownership tax credit to developers and investors constructing a new home or rehabilitating an existing property. These bills–H.R. 839 and S. 875 in the 108th, and H.R. 1549 in the 109th–all enjoyed wide bipartisan support, with as many as 300 sponsors for the House bills and 46 sponsors in the Senate.

More recently, NHIA sponsors have introduced the bill in consecutive sessions of Congress, attracting bipartisan support to create this needed homeownership financing tool for distressed communities. During the 116th Congress, NHIA was introduced in the House as H.R. 3316 by Reps. Bryan Higgins, D-New York, and Mike Kelly, R-Pennsylvania; there were 31 cosponsors for that bill. In the Senate, S. 4073 was introduced by Sens. Benjamin Cardin, D-Maryland, Rob Portman, R-Ohio, Christopher Coons, D-Delaware, Todd Young, R-Indiana, Sherrod Brown, D-Ohio, Tim Scott, R-South Carolina. The NHTC was part of the Moving Forward Act, H.R. 2 (116th), the $1.5 trillion infrastructure bill passed by the House July 2020. The NHIA was reintroduced this year in the Senate as S. 98 by the same six senators as in the 116th Congress (there are 10 cosponsors thus far), and in the House as H.R. 2143 by Rep. Higgins. Since being introduced March 23, H.R. 2143 has added 51 cosponsors. In addition to introduced legislation, it should also be noted the NHTC was included in then-candidate Joe Biden’s Build Back Better campaign platform and, once elected president, in the Treasury fiscal year 2022 Greenbook, where details are provided of the administration’s annual tax proposals.

The NHTC would create a new state-administered tax credit to developers of affordable owner-occupied homes. States, including the District of Colombia and U.S. possessions, would receive an allocation of tax credits from the U.S. Department of the Treasury in the amount of the greater of $6 per capita or $8 million, indexed to inflation after 2022. The nationwide total is estimated to be slightly more than $2 billion annually. 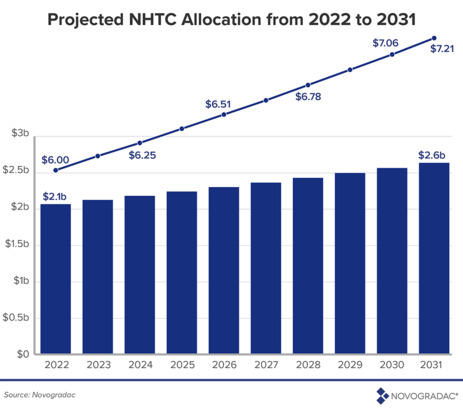 State housing agencies would administer the NHTC, just as they do with the LIHTC, providing developers with tax credits to build or substantially rehabilitate residences in qualifying census tracts. Another similarity to the LIHTC would have state housing agencies develop a qualified allocation plan (QAP) that details the criteria by which state agencies will allocate the NHTC. There will be annual reporting, detailing homes created and other key reporting requirements, and state agencies will also be required to track noncompliance based on guidelines they draft.

Specifics of the incentive laid out by the bill include:

Stipulations would be placed upon resale or conversion of a home: Homeowners would have to pay a “significant portion” of their gains to the state housing agency if they resell their homes within five years; those who convert their homes to rentals would forfeit tax deductions for their rental-related expenses.

Homeownership has long been considered a gauge used to measure the economic prosperity of the country as well as a standard for individual wealth building. Currently, 65.6% of households live in owner-occupied housing as of the first quarter of 2021, a 0.3% increase over the same point last year. Though the homeownership rate has been steadily increasing over the years, certain households, particularly minority and low- and moderate-income households, continue to face difficulties achieving the goal of homeownership. A considerable gap still exists in the homeownership rates of white and BIPOC households–the Black-White homeownership gap and the Hispanic-White gap was 28.1 percentage points and 23.8 percentage points, respectively, in the first quarter of 2021. While both figures represent a modest improvement from historically large gaps, the current rise in home prices, tight supply and income and wealth gaps between households of color and their white counterparts mean additional measures, such as the NHTC, will be needed to close the homeownership gap.

Research shows that addressing the homeownership gap could lead to access to more affordable housing. A May 2021 research brief from the Urban Institute, “Homeownership is Affordable Housing” posits that homeownership provides the “affordability and stability low-income families need” and measures that increase access to homeownership will provide “long-term solutions to the nation’s affordability crisis.” Controlling for income, the author states that among households with annual incomes less than $50,000, on average, renters spend 34% of their income on housing compared to owners who only spend 24%. Similar outcomes are seen among homeowners of color compared to various categories of renters. Among low-income households, those earning less than $50,000, 49% of homeowners are cost-burdened, compared to 75% of renters.

In addition to the benefits of homeownership realized by households, the NHTC, with its targeting of certain census tracts, will improve distressed communities. The NHTC is designed to address the gap between the value of an owner-occupied unit and the construction/rehabilitation costs in distressed areas. Without intervention, such as the NHIA tax credit, development would be infeasible as this gap would require these homes to be sold at a loss. The NHTC would cover approximately 24% of census tracts nationwide, including 25% of non-metro tracts. The NHTC would rehabilitate owner-occupied homes improving blighted and vacant housing, thereby improving these distressed areas, increasing property values of other homes in the area, while also increasing the supply of affordable owner-occupied homes.

When tools aim to direct investment to distressed areas, some policymakers raise concerns that gentrification may follow, in time forcing out the very people the incentive was designed to assist. The NHTC is designed to protect the existing community residents through the caps applied: homebuyer and owner income would be limited to 140% of AMI; the purchase price of homes could not exceed four times AMI; and, the eligible basis for tax credits would be limited to 80% of the national median new home price.

NHTC Could Finance Construction, Rehabilitation of Half a Million Owner-Occupied Homes

The NHTC would go a long way in assisting moderate-income households attain the dream of homeownership and build assets while improving distressed communities across the country. 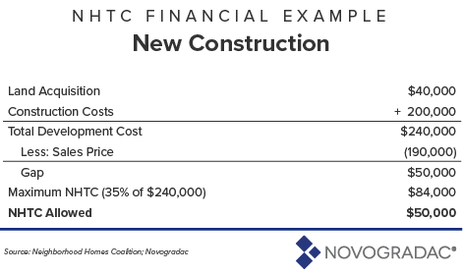 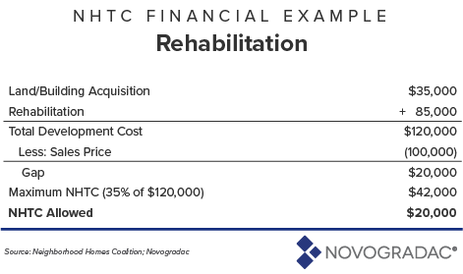 In addition to the caps placed on the amount of NHTCs a project can receive, in the case of owner-occupied rehabilitation, a $100,000 cap is placed on eligible costs.

In addition to the NHTC, the DASH Act aims to further increase homeownership rates by providing a first-time homebuyer refundable credit. To be eligible for the credit an individual or couple: would have to be acquiring their first principal residence; could not have claimed any credit or deduction under Title 26 for homeownership in the past; and, could not be acquiring a home from a relative of the taxpayer or taxpayer’s spouse. The proposal would provide a fully refundable $15,000 down payment that would be equal to 20% of the purchase price of a home, maxing out at $75,000 of home price. The credit would phase out above 110% of conforming loan limits over a range of $100,000 of home price. Furthermore, the credit would phase out above $100,000 of modified adjusted gross income for single filers, and $200,000 for joint filers, over a range of $50,000 of such income. Recapture of the tax credit from the taxpayer would be triggered in the event a home is sold, with certain exceptions, as follows: within the first year following the year of purchase 100% of the credit would be recaptured; 80% recapture would occur if sold in the second year, 60% in the third year, 40% in the fourth year, 20% in the fifth year, with 0% recapture in Year 6. Starting after 2022, the credit amount would be indexed for inflation.

The creation of a new tax credit for single family housing development raises many questions from the affordable housing community. A recent Novogradac Tax Credit Tuesday podcast discussed the NHTC, provided an overview of how the credit would work, who would benefit and how state agencies would administer the tax credit. During that podcast episode the newly formed Neighborhood Homes Tax Credit (NHTC) Working Group was announced. The NHTC Working Group will provide a platform for community development practitioners, and will encourage and facilitate the collaboration of industry stakeholders in their efforts to use the incentive and resolve technical and administrative issues. The NHTC Working Group will monitor congressional action this coming fall, as well as the drafting of a reconciliation bill including NHIA provisions. Novogradac will also host a NHTC webinar in the coming months.