Each year the Harvard Joint Center for Housing Studies (JCHS) releases an assessment of the housing market. This year’s report details the inequities and hardships faced by millions of households, even as the economy recovers from the COVID-19 pandemic. In the State of the Nation’s Housing 2021, data shows that minority households and those with low-incomes, especially renters, continue to be disproportionately negatively impacted by the pandemic. At the same time, those households not negatively impacted by the pandemic have helped to spur a homeownership boom, leading to a tightening of the market and making it even more difficult for potential first-time homebuyers to enter the market. The JCHS report shines a spotlight on the widening gap between vulnerable households who have not been able to fully benefit from the uneven economic recovery, thus emphasizing the need to strengthen and expand the low-income housing tax credit (LIHTC) and other housing proposals aimed at addressing the nation’s affordable housing crisis.

An overview of the housing market shows continued demand for both rental and for-sale homes, but these trends belie the difficulties faced by millions of households. Households of color and low-income renters are still having trouble finding housing they can afford and have been disproportionately impacted by the pandemic. These households were burdened before the onset of the COVID-19 pandemic, and remain more likely to fall behind in housing payments as evidenced by lack of rent and mortgage payments and fears of evictions and foreclosure. 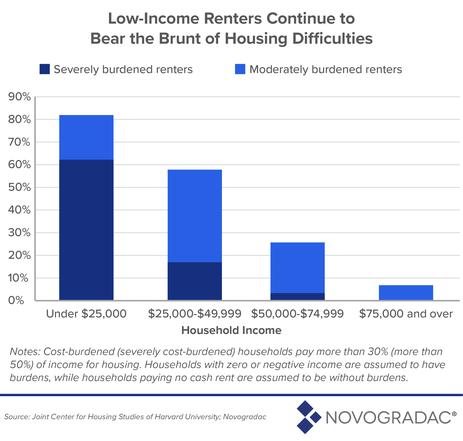 Citing the U.S. Census Bureau’s Household Pulse Surveys, the JCHS report details how low-income households have been affected by the pandemic and continue to struggle. JCHS says more than half (55%) of low-income renters and 46% of homeowners reported having lost income since the start of the pandemic. Between January and March 2021, nearly 25% of both low-income renters and homeowners reported being behind on their housing payments. With federal eviction protections expiring June 30 and mortgage forbearance expiring later this year, households that may have been able to stave off loss of housing may find themselves in difficult positions in the months ahead without interventions.

Overall, the report shows vacancy rates were moderating and rents showed only “modest gains” in early 2021. The number of renter households has been virtually unchanged according to JCHS, standing at 43.4 million renter households in the first quarter of 2021 compared to 43.5 million in 2016. At the same time, multifamily construction has rebounded, with 389,000 units in multifamily starts in 2020, similar to the 2019 level. Completions also rebounded, as 2020 ended with 375,000 units for the year, a figure not seen since 1989.

The JCHS held a release event for the State of the Nation’s Housing report, during which panelists – Gary Acosta, co-founder and CEO of the National Association of Hispanic Real Estate Professionals; Clarence Anthony, CEO  and executive director of the National League of Cities; Chris Herbert, managing director, of the JCHS; Tracy Jan, a reporter for The Washington Post (moderator), and Erika Poethig, special assistant to the president for housing and urban policy on the White House Domestic Policy Council – discussed the implications of the report and what can be done to assist the millions of Americans facing difficulties finding and maintaining affordable housing. As renters and homeowners alike are having trouble covering housing costs, panelists addressed the administration’s efforts to expand the affordable housing supply and help people stay in their homes.

Poethig noted the Biden administration’s American Rescue Plan and American Jobs Plan, the multi-trillion-dollar infrastructure proposal currently being negotiated on Capitol Hill. The former has provided millions in emergency rental assistance, adding to funding provided in earlier COVID-19 relief legislation. A fact sheet about the American Jobs Plan released May 26 explained how the administration proposed to address the nation’s affordable housing crisis, including $318 billion in housing and community development-related provisions, providing $213 billion of direct spending and $105 billion of proposals for new and expanded tax credits. The resources provided under the plan would produce, preserve and retrofit more than two million affordable homes in communities nationwide, including more than 500,000 new and rehabilitated homes for low- and moderate-income homebuyers and homeowners through a newly proposed single family housing development tax credit, modeled after the Neighborhood Homes Investment Act (H.R. 2143/S. 98). Further details to expand the LIHTC were detailed in the administration’s fiscal year 2022 revenue proposals, commonly referred to as the Greenbook.  These proposals build upon repeated calls to expand the LIHTC; the Affordable Housing Credit Improvement Act (AHCIA) of 2021, introduced in the 117th Congress, and the Moving Forward Act, passed in the House in the 116th Congress, represent the plans for enhancing the LIHTC most likely to be considered by Congress.

While federal support is important, panelists noted it will take the concerted effort of federal, state and local governments and organizations to address the housing crisis that has been exacerbated by the pandemic. Both Acosta and Herbert suggested that incentivizing construction (of both moderately priced for-sale units and multifamily housing) through zoning incentives and eliminating exclusionary practices would go a long way in addressing housing issues on the local level.

As mentioned above, negotiations continue on Biden’s infrastructure plan. In addition to championing the housing provisions included within that plan, members of Congress have introduced bills and discussion drafts aimed at addressing the country’s affordable housing crisis, including a discussion draft on legislation to provide rental assistance to all eligible families through expansion of the Housing Choice Voucher Program and the introduction of the Housing is a Human Right Act of 2021, which would authorize more than $300 billion in federal spending available over 10 years to be used for housing infrastructure improvements and reducing homelessness. The findings of the State of the Nation’s Housing have made clear the need to support the expansion of existing incentives like the LIHTC to expand the supply of affordable housing while also working on the state and local levels to address those policies that stifle additions to the housing supply.