On Nov. 5, Rep. Yvette Clarke, D-N.Y., introduced the Affordable Housing and Area Median Income Fairness Act  that, if enacted, could potentially have a wide sweeping impact on how area median income (AMI) is determined for tax-exempt bond and low-income housing tax credit (LIHTC) properties. The bill contains a few provisions but this post will focus on the removal of the high housing cost adjustment.

The first step is understanding the high housing cost adjustment. The U.S. Department of Housing and Urban Development (HUD) applies 5 adjustment factors to AMI to calculate the very low-income (VLI) limit, which is the starting point for Section 8 and LIHTC income limits. Of the 2,598 areas for which HUD publishes income limits, only 962 (37 percent) have no adjustments so that VLI is equal to 50 percent of AMI. For the remaining 1,636 areas, one of the 5 adjustments impacts the VLI. Please see this blog post for more information about the adjustments.

One of the adjustments that HUD applies is called the high housing cost (HHC) adjustment. This adjustment is made in areas where rent is an exceptionally large percentage of the income for the area. In these areas, because rent is so high, more people need housing assistance to be able to afford safe and sanitary housing. So that more people can qualify for assistance, HUD increases the income limit in HHC areas. For HUD FY 2019 there were 15 non-metro counties and 31 metropolitan areas that had their income determined by the HHC (less than 2 percent of all areas). Eleven of these areas are located in Puerto Rico. Please see below for a list of the impacted areas:

Below is the distribution of HHC areas by state. 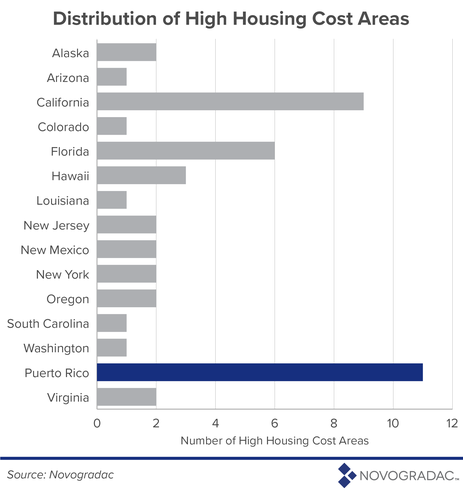 In addition, there are eight areas that are impacted by the HHC adjustment but had the income limit capped by the HUD limit on income limit increases: 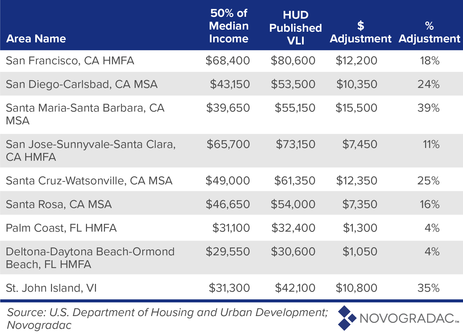 According to HUD, the HHC adjustment stems from their statutory mandate to make adjustments to the income limit because of variations in the prevailing levels of construction cost. HUD has been making this adjustment since at least 1986. As a proxy for construction costs HUD uses the rent that is being charged for a unit. In areas with exceptionally high rents, the income limits are adjusted so that a family of four making exactly 50 percent of AMI can pay 35 percent of their income towards rent and be able to afford to pay rent that is equal to 85 percent of the HUD two-bedroom FMR. For example, if a family makes $2,000 per month, HUD determines that they shouldn’t pay more than $700 (35 percent of their income) towards rent. If 85 percent of the HUD FMR is greater than $700 then this household would need to qualify for affordable housing to avoid being overly rent burdened.

Another example, if the two-bedroom FMR was $1,000 the HHC adjustment for the area would be $29,150 ($1,000*.85/.35*12 rounded to the nearest $50). The HHC calculation is made for all areas, but VLI is only adjusted when the calculation is higher than 50 percent of the AMI for the area. Continuing on with the previous example, if 50 percent of AMI for the area was $30,000 there would be no HHC adjustment for this area. However, if 50 percent of AMI was $25,000, then the VLI would be adjusted to $29,150. In the second example households making between $25,000 and $29,150 would now be able to qualify for housing assistance from HUD and qualify for a 50 percent LIHTC unit. Without the HHC households in this range would not be able to receive such benefits.

In this example, if the HHC adjustment was removed tenants making between $25,000 and $29,150 would no longer be eligible for housing assistance and would have to pay between 41-48 percent of their income on rent assuming a $1,000 fair market rent. 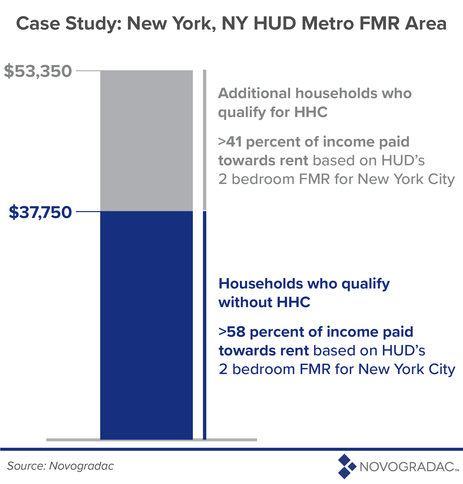 Based on this analysis it would appear that those who are benefiting from the HHC adjustment would be over rent-burdened if they were not able to qualify for housing.

Other Tools Available to States

The bill seeks to remove the HHC adjustment so that households with lower income limits can qualify for housing. However, other tools are at the disposal of bond and tax credit agencies to help address this issue.

For tax-exempt bond properties, federally, a tenant is considered a qualified household if their income is less 60 or 50 percent of AMI, depending on which minimum set-aside was elected. However, allocating agencies can and often do require deeper income and rent restrictions.

The New York, N.Y. HUD metro FMR area is worth examination in more detail. For HUD fiscal year 2019, the VLI is $53,350 based on the HHC adjustment. Without the HHC adjustment the income limit would be $37,750. If we use the $53,350 to calculate a new median income, then $37,750 would be approximately 35 percent of area median income. Therefore, if the allocating agency wanted to use the unadjusted amount they could require that in order to obtain funding units that would normally be

Doing so would achieve the same goals as the bill without requiring congressional approval and without affecting other areas where the HHC adjustment is needed.

One issue that is not addressed in the bill is how this would affect the hold harmless protection from Internal Revenue Code Section 142(d) that impacts both LIHTC and tax-exempt bond properties. The hold harmless policy states that once a building is placed in service the income and rent limit shall never decrease from year to year. Continuing on the New York City example, this means that existing property would likely continue to use $53,350 and new properties would be required to use $37,750. This would have a few interesting outcomes. 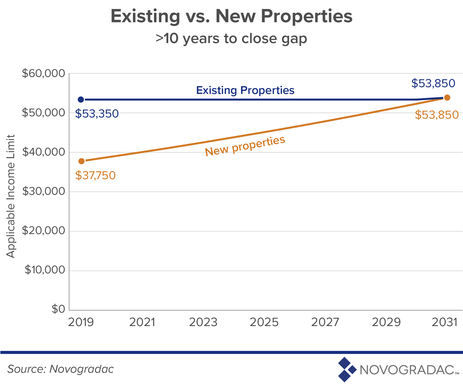 Existing properties would have a hard time competing against new properties that have lower rents. In a large market like New York City it is unlikely this would result in increased vacancies, but on a micro level it could cause issues if a new property is built close to an existing older property. The existing property may have to reduce rents to compete with the new LIHTC property.

Reducing the income and rent limits would also have an impact on a properties ability to support debt and would lead to properties requiring additional subsidies. The bill does include additional funding sources but it is informative to understand the impact this would have on a property. Consider a 100-unit property in New York.

Petition to continue to use HHC

Should the bill be enacted, it contains an opt-in clause for areas that with to continue to use the HHC adjustment. A jurisdiction can petition HUD to allow the jurisdiction to continue to use the HHC adjustment. The bill states, “The Secretary shall review and grant such petitions made by any legal and proper authority within the relevant jurisdiction, including petitions enacted by popular referendum.” It is unclear if HUD is allowed to reject petitions. Also there are questions about who has the right to petition such as: