The report describes FHLBanks’ support of low-income housing and community development activities through three main programs: the Community Investment Program (CIP), the Community Investment Cash Advance Program (CICA), and the AHP. These programs provide loans and grants to their members, which are subsequently used to benefit very low- and low- or moderate-income households and communities. The CIP program funded approximately $3.1 billion for economic development and housing projects, which is 33 percent less than in 2017. The CICA program funded approximately $3.1 billion for economic development in 2018 as well, which is 18 percent less than in 2017. AHP focuses solely on housing, and for this reason is of particular interest to the affordable housing community.

AHP Funds and Its History

Under the Federal Home Loan Bank Act, each of the 11 FHLBanks must contribute 10 percent of its earnings to its AHP.

Since the beginning of the competitive application program in 1990, approximately $5 billion in AHP funding has been awarded to more than 17,800 investments. These investments have supported the development of more than 709,000 affordable rental homes. Seventy-four percent of these homes were in urban or suburban areas and 26 percent were in rural areas. Twenty-two percent of AHP funded homes were owner-occupied units, and the remaining 78 percent were rental homes.

Comparison of Funds between Different FHLBanks

Of the 11 FHLBanks, the San Francisco FHLBank awarded the most amount of AHP funds in 2018, close to $67 million. The Indianapolis FHLBank awarded the lowest amount of AHP funds with $12.6 million in grants. This is a large variance, not only in dollars but also in the number of rental homes that will be created or rehabilitated. The San Francisco FHLBank will create or rehabilitate almost six times as many homes as the Indianapolis FHLBank. The median amount of funds loaned out from all 11 FHLBanks was $28.3 million. 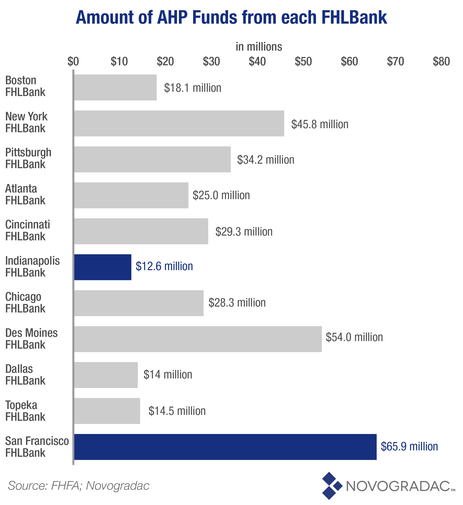 Out of all the competitive application program funds, 22 percent were given to rentals for extremely low-income households, which are households with incomes of 30 percent or less of AMI. Very-low income households, which are those with an income between 30.1-50 percent AMI, received 51 percent of funds. Of the very-low-income homes supported by AHP funds, 87 percent are in urban or suburban developments and 13 percent are in developments in rural areas.

Slightly more than two-thirds (67 percent) of AHP-funded developments served homeless persons or persons with special needs, which is a slight decrease from 68 percent in 2017. See the chart below for a further breakdown of awards. 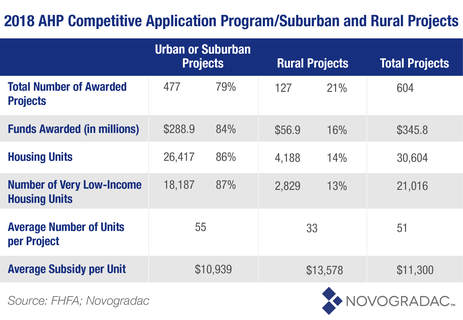 Development Costs and Other Federal Funding

AHP activities can be coordinated with other federal or federally subsidized affordable housing activities to the maximum extent possible. In 2018, approximately 60 percent of AHP projects obtained funding from at least one other federal housing program. This is a 3 percent decrease from 2017. The low-income housing tax credit (LIHTC) is the most common other federal subsidy used in conjunction with AHP funding, and has been for the last five years. The average percentage of total AHP-assisted developments that have included LIHTC funding over the past five years is 49 percent. See the breakdown below for projects approved with other federal funding. The numbers displayed add up to more than 100 percent because some developments receive federal funding from more than one source.

Much like the LIHTC, the AHP is an important tool that can be utilized in financing the construction and rehabilitation of affordable rental housing. Its ability to be combined with other federal funding makes it especially attractive and helps developers in high-cost and difficult to develop areas fill the necessary funding gap. With high land prices and the rising cost of labor, the funding the AHP provides a crucial source of gap financing for affordable rental housing.