Under Rev. Proc. 2018-18, each state’s 2018 LIHTC ceiling was to be the greater of $2.40 multiplied by the state population or $2.76 million. The fiscal year (FY) 2018 omnibus appropriations bill included an expansion of the LIHTC, increasing the per-capita amount to $2.70 and the small state minimum to $3.105 million. The PAB volume cap for states is $105 multiplied by the state population or $310,710,000. States with fewer than 1.15 million people get the LIHTC minimum and states with less than 2.95 million people get the bond minimum. With the increase in per-capita allowances, states that lost population but do not qualify for the small-state minimum, will not be seeing a decrease in their LIHTC and PAB cap.

The increase in LIHTC allocation is tempered by several factors. First, the increase is temporary; LIHTC annual allocation in 2022 will revert to current law, adjusted for inflation. Second, recent tax reform resulted in a change in inflation adjustments to use the “chained” CPI-U . While some believe the chained CPI-U provides a more accurate measure of the changes in the cost of living, as it accounts for biases not factored into the traditional CPI-U, the chained CPI-U grows more slowly than the traditional CPI-U. This change will decrease inflation adjustments in LIHTC and PAB allocations in future years.

To analyze the effect of the change in inflation adjustments and the FY 2018 omnibus provisions, Novogradac used projections of inflation and population to estimate the growth in 9 percent LIHTC allocation over the next decade: 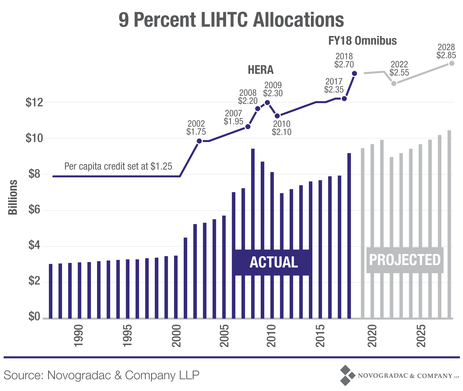 Overall, Novogradac estimates a gain of 28,400 rental homes over the next decade, which represents about 12 percent of the number of affordable rental homes lost from tax reform. And, given that the 12.5 percent allocation increase applies only to 9 percent LIHTC production, this gain does not address the loss of PAB-financed production that tax reform caused. While important, these units represent a down payment, not a complete fix.

Losing population: In total, seven states lost population. Wyoming experienced a 1.1 percent decrease in population, the largest of the all the states. West Virginia had the largest numeric decrease of all the states with a loss of 15,245 residents. The other states losing population include: North Dakota, Alaska, Mississippi, Vermont and Hawaii. Since Alaska, North Dakota, Vermont and Wyoming are eligible for the small-state minimum, their LIHTC and PAB cap allocations have actually increased this year.

Of all the states and territories, Puerto Rico posted the largest numeric decrease, 74,130 people, a 2.2 percent reduction in population. It should be noted that the population figures are as of July 1, 2017 and therefore do not reflect the effects of the 2017 hurricane season on Puerto Rico, U.S. Virgin Islands and the gulf states.

Small-state LIHTC minimum: Because their populations are below the small state minimum, these states will receive LIHTC allocations of $3.105 million and not the population-based LIHTC allocation: Alaska, Delaware, the District of Columbia, Montana, North Dakota, Rhode Island, South Dakota, Vermont and Wyoming. This list of small-state recipients remains unchanged from 2017 and 2016.

Drop in LIHTC ceiling: None. Because of the increase in the LIHTC per-capita amount resulting from the FY 2018 omnibus allocation and inflation increase, even those states that lost population will see an increase in their tax credit allocation.

Small-State PAB Cap Recipients: Sixteen states in total, plus the District of Columbia, will be receiving the small state PAB minimum. This group includes the nine recipients of the LIHTC small state minimum, along with Hawaii, Idaho, Kansas, Maine, Nebraska, New Hampshire, New Mexico and West Virginia. Four states have grown out of the small state bond minimum: Mississippi, Nevada, Arkansas and Utah.

Drop in PAB Cap Ceiling: None. All states will see an increase in their PAB allocations because of the inflation increase in the per-capita figure used for the calculation.

May 11, 2021: State of HTC Market, Including Equity Pricing, Regulation and Legislation
Posted on May 11, 2021
May 4, 2021: What CDEs and Qualified Businesses Should Be Doing Now to Prepare for the Next NMTC Application Round
Posted on May 4, 2021
April 27, 2021: Maximizing the Benefit of State and Local Tax Incentives and Exclusions for Renewable Energy Properties
Posted on April 27, 2021
END_OF_DOCUMENT_TOKEN_TO_BE_REPLACED