On Jan. 2, 2013, President Barack Obama signed into law the American Taxpayer Relief Act, which among many other things contains a provision which extended the 9 percent rate floor to any project receiving a low-income housing tax credit (LIHTC) allocation prior to January 1, 2014.

The January 2013 floating rate is 7.36 percent, which is more than 18 percent less than the 9 percent rate. For developments that have no excess eligible basis at the 9 percent floor rate, this would have translated into an 18 percent loss in tax credit equity!

The calculation below demonstrates the loss in equity at a 7.25 percent credit percentage and $0.83 credit price. 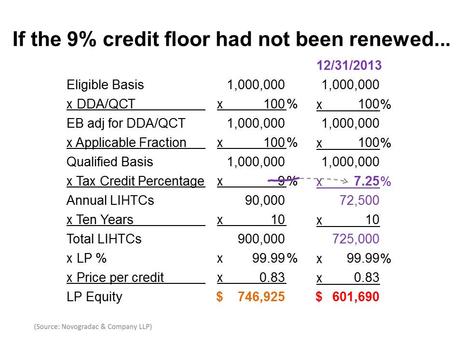 As you can see, allowing this provision to expire would have been a damaging blow to the LIHTC as a crucial source of funding for the creation of affordable housing.

It’s not too late to join Novogradac & Company at the Novogradac Tax Credit Developers Conference Jan. 10-11 in Miami, Fla. I will be discussing this provision in detail, as well as what lies ahead for the tax credit community in the year to come.