Background
A 30 percent basis boost means every eligible dollar spent generates $1.30 of eligible basis.  This will generally result in up to a 30 percent increase in the amount of LIHTC and equity.  However, it is important to note that for competitive 9 percent allocations, often the amount of LIHTC allocated by the housing credit agency is less than the maximum a property could generate based on its eligible basis, and therefore a basis boost does not always result in additional LIHTC and equity.  Allocating agencies also are able to allow less than the full 30 percent. By contrast, 4 percent developments typically need as much equity as possible to be financially feasible and therefore, agencies rarely need to limit the amount of LIHTC on 4 percent developments.

Currently there are three ways to qualify for up to a 30 percent increase in eligible basis:

AHCIA substantially modifies each of the provisions above and adds ways to qualify for a boost:

The expansion of the basis boost will likely result in two outcomes – a general increase in number of units produced from 4 percent credits (discussed in more detail below) and the ability for more developments to be built in higher cost areas. Typically, high costs areas have higher land costs.  Because land does not generate tax credits it is more difficult for a deal to financial feasible in areas with higher land values.  Expanding the ways for a LITHC property to qualify for the boost will likely lead to more developments being financially feasible in high cost areas.

Removal of Population Cap on QCT Areas
An area is eligible to be designated as a QCT if it meets one of the following criteria:

Under current law, no more than 20 percent of the population of an area can be designated as a QCT even if the tract would otherwise meet the definition above. The limitation applies within each metropolitan statistical area (MSA) and statewide outside of MSAs.

Based on information provided by HUD, 3,184 census tracts would otherwise qualify as a QCT but are currently excluded due to the 20 percent cap.

The change in AHCIA would result in a 23 percent increase in QCTs.  Note that some of these census tracts may already be in a DDA and therefore already qualify for the 30 percent boost.  With the implementation of Small Area DDAs (SADDA), HUD has attempted to avoid designating an area as both SADDA and QCT.  However, under the old method of allocating entire counties there was much more overlap of QCTs and DDAs.

It is interesting to look at what areas will be most impacted by this change.  The Los Angeles-Long Beach-Anaheim, Calif. MSA would have the largest number of additional areas designated:

The removal of the cap results in 34 percent of all census tracts in this MSA being designated as QCTs.  Those developing here would welcome these additional areas since Los Angeles was heavily impacted when HUD shifted from county wide DDAs to Small Area DDAs.

Puerto Rico would also see major changes.  The territory has a total of 945 census tracts, of which 238 are currently designated as QCTs (25 percent).  However, if the cap is removed 539 additional areas would qualify, resulting in 82 percent of Puerto Rico being designated as a QCT.

A complete list of the impacted areas can be seen at this link.

Increase in Population Cap on DDAs
In determining DDAs, HUD follows the Internal Revenue Code’s legislative history and uses a ratio of fair market rents divided by the maximum income of eligible tenants (the LIHTC 60 percent income limit). The higher the ratio the more “difficult” it is to develop affordable housing.  For nonmetropolitan areas HUD determines this ratio on a county basis and for metropolitan area HUD determines this ratio for each zip code (known as Small Area DDAs - see this blog post from last year for more information).  HUD then sorts the metropolitan and nonmetropolitan areas separately and selects zip codes, starting with the highest ratio, until 20 percent of all areas have been selected (this sort is done separately for metro and nonmetro areas).

Making the Housing Credit Agency Discretionary Boost Available to All LIHTC Properties
This change could have the most significant impact on the amount of units generated and the ability for 4 percent properties to get built in areas that would not otherwise qualify for DDAs or QCTs but still need affordable housing.  Currently, a housing credit agency is allowed to designate a 9 percent building that needs additional LIHTCs to be feasible as if it were located in a DDA.  This provision has been implemented differently by housing credit agencies depending on the need in their jurisdictions.  Some make the boost available to all properties not otherwise located in a DDA or QCT that demonstrate the need for additional LIHTCs to be feasible, others make the boost available only to developments located in certain areas or of certain types, and some don’t use it at all.

As a reminder, the amount of 9 percent LIHTCs available to a housing credit agency is limited. Therefore, when a housing credit agency designates a building as qualifying for the boost, the total amount of LIHTCs available for allocation does not change.  However, AHCIA would extend this provision to ALL developments.  This means that state agencies could effectively increase the amount of LIHTCs available.   The number of 4 percent LIHTCs an agency can allocate is limited by the amount of tax-exempt bonds a state can issue.  What is interesting is AHCIA does not impose a limit on the number or dollar amount of developments that can be designated.  The bill only states that the designation must be made “in order for such building to be financial feasible.”  Furthermore, there is not additional guidance in the act as to how to determine financial feasibility other than the long-standing statutory provisions. That said, if the bill is enacted, agencies should incorporate criteria for determining which developments qualify rather than a blanket allowance.

The ability for the housing credit agency designation to extend to 4 percent developments would be welcome news.  Tax-exempt bonds and 4 percent LIHTCs remain underutilized for building affordable housing in almost every state.  This is often due to the fact that in many areas of the country a 4 percent development is not feasible without additional subsidy or soft funding sources due to the amount of debt the development must support when compared to the affordable rents.  According to the CDFA 2015 Annual Volume Cap Report (the CDFA Report), 13 states reported issuing $0 in multifamily housing bonds.  It will remain to be seen if the 30 percent boost in LIHTCs (and the resulting 30 percent boost in equity) would make 4 percent developments feasible in these states.

A few states have been very active in bond issuances in the last few years. According to the CDFA Report California and New York have issued between $1.5 and $2 billion in multi-family tax exempt bonds in 2014 and 2015, plus there was concern in California and Washington that the state would run out of volume cap in 2017.  However, as equity prices have cooled off due to potential tax reform, the number of new 4 percent developments has slowed down in the fourth quarter of 2016 and first quarter 2017.  The up to 30 percent boost in LIHTCs may result in being able to close the gap caused by lower LIHTC prices for developments not already located in a boost area. This along with the 4 percent floor (which will be covered in detail in subsequent blog post) will help continue to make 4 percent developments feasible.

Inclusion of Indian Areas as Difficult Development Areas
AHCIA would add a new class of DDAs for certain developments built in Indian Areas.  To qualify the area would have to be located in an Indian area as defined in Section 4(11) of the Native American Housing Assistance and Self Determination Act of 1996 (NAHASDA) and meet one of the following requirements:

It is hard to quantify how much of an impact this would have on the number of rental homes generated; however, any additional LIHTCs to make developments more feasible in Indian Areas would be welcomed by many tribal communities.

Impact to Production
To estimate how many additional rental homes will be generated by expanding the reach of the basis boost provisions, however, the impact will likely be felt in two different ways –generating additional units and developments that were not feasible at all before may now be able to move forward.

To examine the ability for already feasible developments to generate additional homes, consider an example assuming an eligible basis of $200,000 per home and ineligible costs of $2 million.  Such a development could generate almost 14 percent more units without taking on any additional debt. 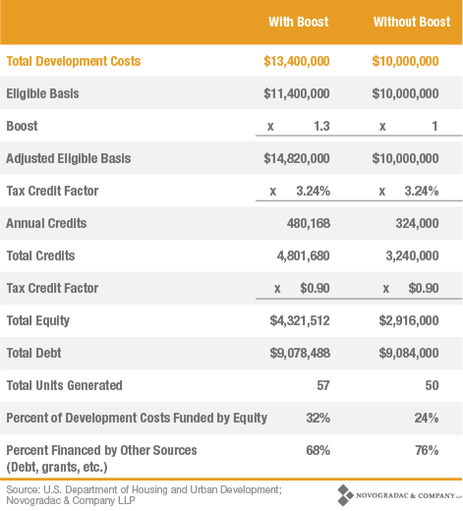 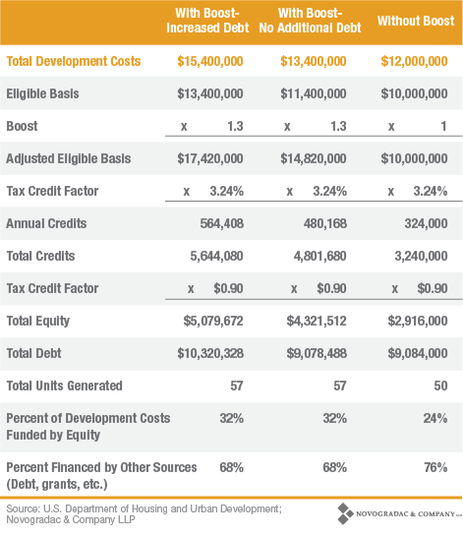 This example shows the increase in eligible basis can be leveraged to result in additional units.  In the example above the 30 percent boost in equity resulted in a more than 30 percent increase in homes versus a non-boosted development.

Although this is just a theoretical analysis, it corresponds very closely with the actual results from the industry.  HUD maintains the LIHTC Database, which HUD’s website describes as: “created by HUD and available to the public since 1997, contains information on 43,092 developments and 2.78 million housing units placed in service between 1987 and 2014.”  Novogradac & Company extracted the data from the LIHTC Database for all 4 percent developments placed in service during the five year period from 2010-2014. After adjusting for those with incomplete data, there were for 909 LIHTC 4 percent developments placed in service during this period.  Based on the data, those able to take advantage of the basis boost generated an average of 131 homes per development, as opposed to an average of 102 homes for developments without the boost.

Extrapolating the average number of homes per development across the sample size and assuming all developments would be eligible for the basis boost suggests the AHCIA change would generate almost an additional 24,000 homes over 10 years, which is approximately 2,400 additional units per year.

Conclusion
Expanding the reach of the basis boost will be beneficial to the LIHTC industry.  As shown here, the ACHIA’s boost expanding provisions would allow additional homes to be generated on 4 percent LIHTC developments, make additional 4 percent developments feasible and allow LIHTC properties  to be built in higher cost areas.

May 4, 2021: What CDEs and Qualified Businesses Should Be Doing Now to Prepare for the Next NMTC Application Round
Posted on May 4, 2021
April 27, 2021: Maximizing the Benefit of State and Local Tax Incentives and Exclusions for Renewable Energy Properties
Posted on April 27, 2021
April 20: 2021: Understanding Provisions of the Affordable Housing Credit Improvement Act of 2021
Posted on April 20, 2021
END_OF_DOCUMENT_TOKEN_TO_BE_REPLACED