The Affordable Housing Credit Improvement Act of 2019 (AHCIA) includes several provisions that affect boosts to eligible basis (similar provisions were included in the 2017 version of AHCIA). If enacted, these provisions could make the low-income housing tax credit (LIHTC) more productive and effective. The changes would also assist properties in development that are struggling due to increased costs as a result of COVID-19. The ACTION Campaign has called on Congress to enact some of the basis boost provision in AHCIA as means to address both the immediate needs of properties in distress as well as help address sharply increased needs for affordable rental housing and assist in the economic recovery.

As discussed in a previous post, the purpose of the basis boost is to target areas where the feasibility of constructing a new building or rehabilitating an existing structure is particularly difficult to achieve due to the disparity between an area’s land and development costs and median incomes. Boosting eligible basis increases the property’s maximum allocation, allowing a LIHTC property to generate more equity. The provisions introduced in the AHCIA would enhance and expand the availability of the basis boost, which could bring desperately needed affordable housing to the areas of the country that need it the most.

Currently there are three ways to qualify increases in eligible basis. The property has to be:

AHCIA would substantially modify each of the provisions above and add ways to qualify for a boost:

Currently, housing credit agencies have the discretion to allow developments to use a 30 percent basis boost as if they were in a DDA, even when they are not, if the development requires additional LIHTCs to be financially feasible. The caveat is that this discretion is limited to 9 percent properties.

The AHCIA proposes extending that provision to properties utilizing 4 percent credits and tax-exempt bonds. Unlike the 9 percent LIHTCs, the number of 4 percent credits an agency can allocate is limited by the amount of tax-exempt private activity bonds a state can issue, and not on the amount of LIHTCs. Tax-exempt bonds and 4 percent LIHTCs remain underutilized for building affordable housing in many states, although the number has decreased in recent years. This is often due to the fact that in many areas of the country, a 4 percent development is not financially feasible without additional subsidy or soft funding due to the amount of debt the development must support compared to the affordable rents they are able to collect.

This change has the potential to have a significant impact in the number of affordable rental homes developed nationwide. According to the Community Development Finance Agencies (CDFA) 2018 Annual Volume Cap Report, ,only about 27 percent of the total private activity bond capacity was used in 2018. For states with underutilized bond cap, this boost can generate more affordable housing in general, and for states where bond cap has been is being fully utilized, the boost will allow allocating agencies more flexibility to ensure that previously underserved areas also have the opportunity to provide affordable housing. In addition, there are an increasing number of states that are bond cap constrained. If a development has additional LIHTC equity it may help reduce the amount of bonds needed.

It is important to note that many state agencies have already developed qualified allocation plan provisions and best practices of what types of developments should qualify for the discretionary boost on the 9 percent side. These parameters are often geographically based (i.e. portions of the state where developments) or are difficult or for housing types that are difficult to build (e.g. special needs housing). It is likely that states would initially mirror these same requirements on the 4 percent side.

Raising the Population Cap and Expanding the Classification of DDAs

In determining DDAs, HUD currently follows the Internal Revenue Code’s legislative history and uses a ratio of fair market rents and “maximum income of eligible tenants” (which HUD defines as the the LIHTC 60 percent income limit since the legislative history predates the Average Income Minimum Set-Aside). The higher the ratio, the more “difficult” it is to develop affordable housing. For nonmetropolitan areas, HUD determines this ratio on a county basis and for metropolitan areas HUD determines this ratio for each ZIP Code Tabulation Area (known as Small Area DDAs). HUD then sorts the metropolitan and nonmetropolitan areas separately and selects areas, starting with the highest ratio until 20 percent of the population of all areas has been selected (this sort is done separately for metro and nonmetro areas).

The AHCIA also has two more adjustments designed to help spur developments in rural areas. First, it would classify all non-metropolitan counties as DDAs. This would be a significant increase. Currently there are 1,973 non-metro counties, of which 355 are designated as DDAs. Under this proposal, all 1,973 counties would be eligible for the 130 percent boost.

The second area adjustment in the AHCIA is to extend the DDA designation to all rural areas as defined by section 520 of the Housing Act of 1949. If an area is considered rural can be determined by using USDA’s Eligibility Map. It is hard to quantify how many areas this would impact, especially in conjunction with the first adjustment to include all non-metro counties. However, there are many rural areas in metro counties that would benefit from this provision. 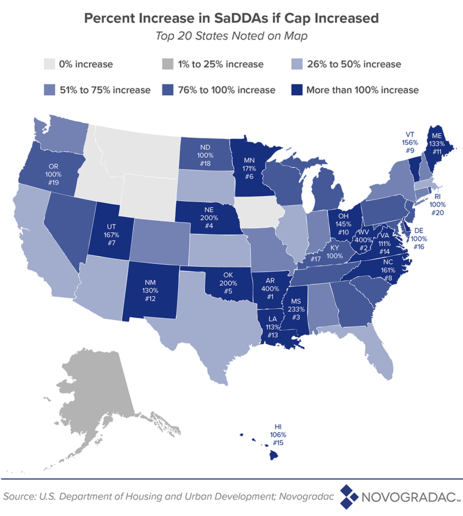 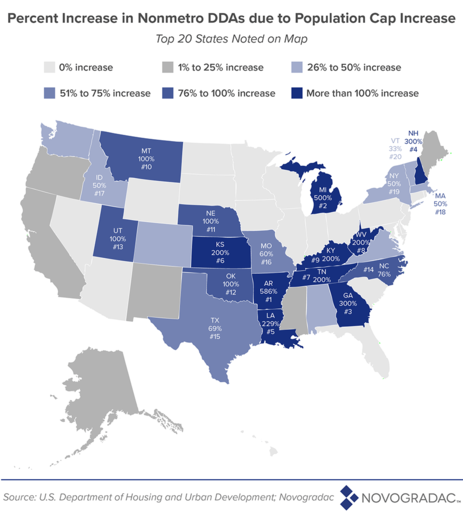 Include Indian Areas as DDAs

The AHCIA would also add a new class of DDAs for developments in an Indian area as defined in Section 4(11) of the Native American Housing Assistance and Self Determination Act of 1996 (NAHASDA) and meet one of the following requirements:

There is no way to specifically quantify how much of an impact this change would have on the number of affordable rental homes generated. LIHTC development on tribal lands can be difficult. Often the land has to be leased by the property and therefore cannot be mortgaged and often tribal lands have very low AMI and rent limits. Any additional LIHTCs to make developments more financially feasible in Indian Areas would be welcomed by many tribal communities.

Currently an area is eligible to be designated as a QCT if it meets one of the following criteria:

Under current law, no more than 20 percent of the population of an area can be designated as a QCT even if the tract would otherwise meet the definition above. The limitation applies within each metropolitan statistical area (MSA) and statewide outside of MSAs.

Based on information provided by HUD, removing the cap would create 4,402 more QCTs that would otherwise not qualify under the current restrictions.

Some areas would be more impacted by the change than others. The Los Angeles-Long Beach-Anaheim, Calif. MSA would have the largest number of additional areas designated:

The removal of the cap results in 47 percent of all census tracts in this MSA being designated as QCTs. Those developing here would welcome these additional areas since Los Angeles was heavily impacted when HUD shifted from county wide DDAs to Small Area DDAs in 2016.

Puerto Rico would also see major changes. The territory has a total of 945 census tracts, of which 238 are currently designated as QCTs (25 percent). If the cap is removed 539 additional areas would qualify, resulting in 82 percent of Puerto Rico being designated as a QCT.

See below for a list of additional QCT eligible areas by state. 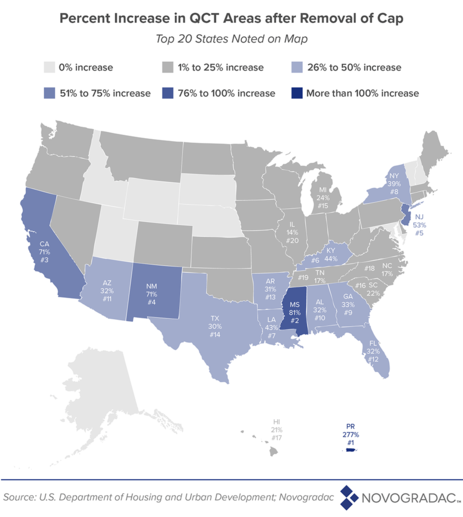 Expanding the reach of the basis boost will be beneficial to low-income renters nationwide. As shown here, the AHCIA’s boost expanding provisions would allow additional homes to be generated on 4 percent LIHTC developments, make additional 4 percent developments financially feasible and allow more LIHTC properties to be built in higher cost areas.