Today Reps. Earl Blumenauer, D-Oregon, Darrin LaHood, R-Illinois, Brian Higgins D-New York, and Terri Sewell, D-Alabama introduced the Historic Tax Credit Growth (HTC-GO) Act of 2021. The 2021 bill builds on past support for the HTC and is intended to enhance the incentive while also responding to the current reality of development during a pandemic; the Senate companion bill is forthcoming.

Major provisions of the House bill include both temporary enhancements prompted by COVID-19 challenges and permanent revisions, such as:

These proposed changes would enhance the use of the HTC, making it easier for nonprofits and other tax-exempt entities to access the incentive, while also facilitating use of the HTC in conjunction with other tax credits. The HTC has already proven to be an effective tool in the revitalization of communities across the country and these provisions if enacted would increase its efficacy.

With the announcement of the HTC-GO Act within this 117th session of Congress, and the recent release of findings from the U.S. Department of the Interior’s National Park Service (NPS) 2020 HTC report, as well as its annual, joint assessment with Rutgers University, now is an opportune time to garner support for the HTC, a key incentive and tool of economic and community development.

Even before to its reintroduction in the 117th Congress, the HTC-GO was seen as an economic recovery tool. In response to the COVID-19-related economic downturn, housing and community development provisions, such as both temporary and permanent enhancements to the HTC, were included in H.R. 2, a comprehensive infrastructure bill passed by the House July 2020. That bill included provisions of the HTC-GO Act of 2019 (S.2615/H.R.2825).

The NPS, along with its partners, regularly assess and report on the benefits created by the HTC, including job creation, generation of economic activity, enhancement of property values in aging communities, creation of affordable housing, and the attraction of new private investment to communities across the country. Since 2004, the NPS has released an annual report on the nationwide use of the HTC. The March 2021 report, “Federal Tax Incentives for Rehabilitating Historic Buildings,”  highlights the growing trend of the HTC as a key tool of economic development. Since 1976, this incentive has fueled more than 46,000 projects, and leveraged $109.18 billion in private investments used to preserve historic buildings. Data from fiscal years (FYs) 1977-2020 highlights the following: 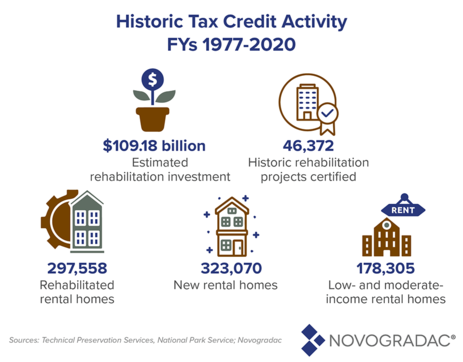 The NPS and Rutgers’ Annual Report on the Economic Impact of the Federal HTC for Fiscal Year 2019, further documents this success, providing an estimate of the following tax revenues and jobs created by the HTC from FY 1978-2019: 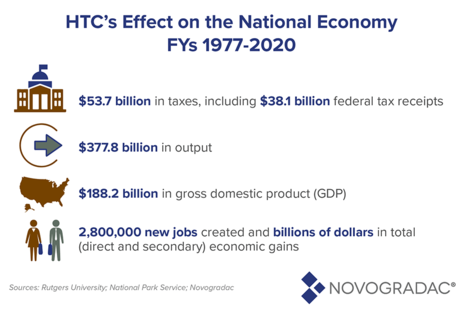 The 2020 NPS data shows that HTC investments have been made in projects both big and small, and in 2020 maintained an equitable distribution of investment across projects. FY 2020 saw more than $6.45 billion in private investment in historic preservation and community revitalization efforts. Additionally, new national register nominations expanded the breadth and depth of the HTC, with 2020 seeing a 17% increase in the number of projects listed in the National Register of Historic Places. In 2020 the size of projects funded diversified : 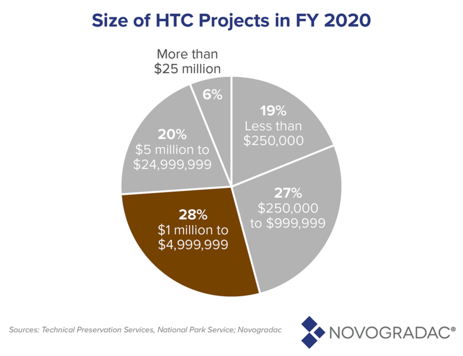 NPS’s 2020 HTC data highlights that from, FY 2016-2020, the five states with the largest qualified rehabilitation expenditures (QRE) were:

The five states/ territories with the largest amounts of QRE per capita from 2016-2020 were:

The only region that did not receive an application or funding of HTCs from 2016-2020 was the U.S. Virgin Islands. NPS reports that Puerto Rico received a few applications, but had not yet funded a project through FY2016-2020. State HTCs have continued to remain critical to the growth of HTC projects in 2020. Thirty-nine states have state HTCs that can be used with the federal HTC to invest in property rehabilitation and community revitalization.

With the reintroduction of the HTC-GO Act in the House and expected soon in the Senate, it is important for HTC advocates to reach out to their member of Congress to urge cosponsorship of the bill.  Members who cosponsored H.R. 2825 or S. 2615 last Congress are the most likely to cosponsor again in this session.

The HTC-GO Act will probably not be considered on its own. The proposals are more likely to be included with other community development tax incentives in an infrastructure financing bill expected to be considered by Congress later this year. Yesterday in Pittsburgh, President Biden outlined his $2.25 trillion American Jobs Plan, a comprehensive infrastructure plan that includes housing, community development, and climate change/green energy proposals along with more traditional infrastructure proposals.

Given anticipated Republican opposition to the Biden’s infrastructure plan, Congressional Democrats are expected to consider it using reconciliation using the forthcoming FY 2022 budget resolution. Because of the narrow margins in Congress, it will be very difficult for the plan to be enacted without substantial changes.

However, if a FY 2022 budget resolution with reconciliation instructions is passed, the plan could provide a legislative vehicle for HTC-GO and other community development tax incentives similar to what was included in the House infrastructure bill passed last July.