Among the numerous housing and community development provisions included in the Build Back Better Act (BBBA), the House reconciliation bill currently pending in Congress, are several proposals to enhance the New Markets Tax Credit (NMTC) incentive.

Making the tax credit a permanent part of the Internal Revenue Code would ensure investments in underserved communities continue into the future, as well as address the disparate impact the pandemic has had on low-income communities.

The BBBA, as advanced by the House Ways and Means Committee in September, would provide:

A previous Notes from Novogradac post detailed the scoring information provided by the Joint Committee on Taxation on the House Ways and Means Committee’s portion of the BBBA. The NMTC provisions had a score of $2.671 billion over 2022-2031. 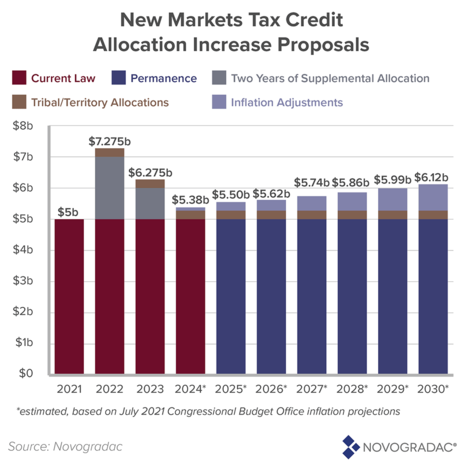 Allowing investors to use the NMTC against their AMT liability would put the NMTC on par with the low-income housing tax credit (LIHTC) and historic tax credit (HTC). If Congress were to establish a new global minimum tax as under consideration, it would be similarly important for the NMTC to reduce such minimum tax liability.

Some of the BBBA’s proposals have appeared in previous legislation. The timeline below details these pieces of legislation. 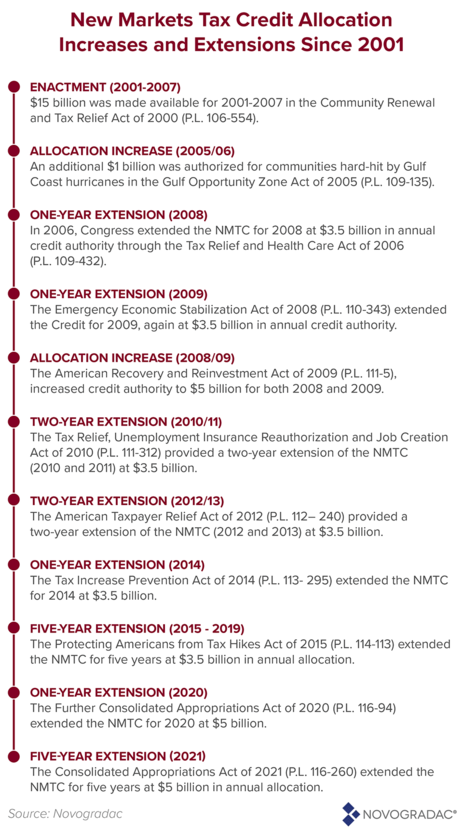 While the timeline shows the legislation that expanded and/or extended the NMTC, Congress has proposed other legislation that would have made the NMTC permanent and/or provided other enhancements. Most recently, the NMTC Extension Act of 2021, introduced during the 117th Congress in the House (H.R. 1321) and Senate (S. 456), proposed permanence for the NMTC, $5 billion in annual allocation authority, adjusted for inflation, and an exception from AMT relief for NMTC investments.

In the House, the bill was sponsored by Rep. Terri A. Sewell, D-Alabama, and currently has 91 cosponsors, including 46 Republicans and 45 Democrats. In the Senate, the bill was sponsored by Sen. Benjamin L. Cardin, D-Maryland, and has 12 Democrat and 10 Republican cosponsors. The NMTC Extension Act was also introduced in the 116th Congress, with various iterations of the bill being introduced in previous Congressional sessions. The continued bipartisan support for enhancing the NMTC speaks to the importance of this incentive’s ability to drive investment to low-income communities.

The recent announcement of the calendar year (CY) 2020 NMTC allocation awards represents the first of at least six-consecutive $5 billion rounds. In the CY 2020 round, 100 community development entities (CDEs), of 208 applicants, were awarded NMTC allocations. Awardees included 14 minority or native-owned CDEs. All 100 CDEs are to give at least 75% of their investments to distressed areas and 16 of the CDEs received NMTC allocations to specifically invest in rural areas; 20% of investments will be made in rural communities. All $5 billion in allocated funds for CY 2020 were used by the approved CDEs from across the country. This is up from $3.5 billion used in 2019. Through the CY 2020 round, the CDFI Fund has made 1,354 allocations with $66 billion in tax credit authority. The NMTC is a very powerful tool–for every $1 invested in the NMTC incentive, more than $8 of private investment is generated.

President Biden ran on a community development platform and expanding and making the NMTC permanent would help him fulfill his campaign promise of addressing the needs of low-income communities. Permanence for the NMTC was also included in the FY 2022 Greenbook, as explained in this Notes From Novogradac post. A previous post from Notes From Novogradac details the positive effects of the NMTC on low-income communities.

Since its creation in 2000 through October 2020, the NMTC has financed 6,400 projects; 25.9% of these projects went to manufacturing, 16% went to healthcare, 10.2% were for mixed-use projects, and 10% were for childcare, youth and family services. A total of about 1.7 million people have benefited from these NMTC projects and 55% of the mixed-use projects included a community facility, nonprofit, or social service. The NMTC has created 57,414 jobs since its creation and 35,440 are permanent full-time positions.

To ensure the NMTC will continue this good work, Congress must pass the BBBA with its NMTC provisions intact. The NMTC is not as expensive as other provisions in the reconciliation bill. Furthermore, making the NMTC permanent now would be less expensive than doing so later. If Congress makes the NMTC permanent now, the federal cost in the 10-year budget window is only for tax years 2026-2031, as Congress has already authorized the NMTC for 2021-25.

The closing days of October will likely be eventful. House Democrats have set an Oct. 31 deadline for passing the bipartisan infrastructure bill and because that the bipartisan infrastructure bill is linked politically with the Build Back Better reconciliation bill, leadership is pushing to use that deadline for determining the topline amount for the reconciliation bill. The total gross spending in the reconciliation bill was originally envisioned to be $3.5 trillion, but this may be cut to as low at $1.75 or $2 trillion to get support from House and Senate moderate Democrats. The final BBBA reconciliation bill could be considered as early as November to mid-December. Given the imperative to reduce the size of the legislation, the NMTC provisions are at risk, and advocacy is needed to ensure they remain in the final bill.

The reconciliation bill has presented the chance to make a lasting change in community development. Now is the time to urge Congress to make the NMTC permanent and continue this progress. The Novogradac 2021 Fall New Markets Tax Credit Conference is this week. The status of community development provisions in the BBBA will be a topic of discussion, among many other issues important to the industry. Be sure to attend to be prepared for the end of year negotiations, 2022 and beyond.