Overall, there was good news for older adult households in terms of income and wealth, though, unfortunately, not everyone benefitted equally. It may not be surprising that in most categories renters did not fare as well as homeowners, but it is no less troubling. Median renter incomes for older adult households was $28,000 compared to a median income of $61,000 for older homeowners in 2016. The gap in median incomes for older households by tenure is larger than that for all renters and homeowners – the 2016 American Community Survey estimates reported median homeowner income was $71,000 compared to a median renter income of $35,000. 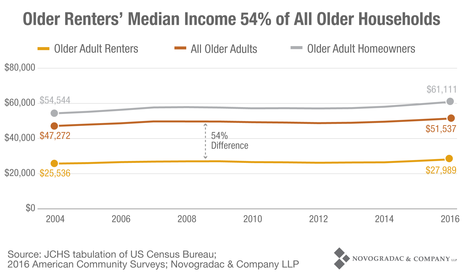 Renters also have less wealth than owners as wealth is often tied to homeownership. The chart below shows in 2016 renters net worth is just 2 percent of that of homeowners across the various age ranges. There is a slight uptick in older renters median net worth as they age – the net worth of renter households aged 80 and over is 51 percent higher than renters aged 50-64 years old, but is still very low at just $7,550 (compared to same aged homeowners who have a median net worth of $339,900).  It should be noted that while homeownership rates are high for older Americans (76.2 percent of older adult households own their homes), rates are declining for all older adult households and in some categories are lower than their pre-recession levels. 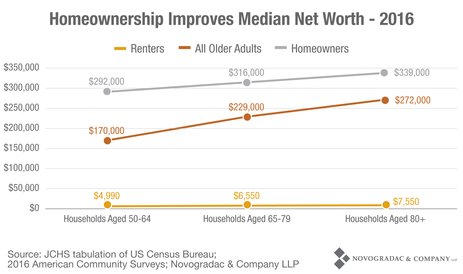 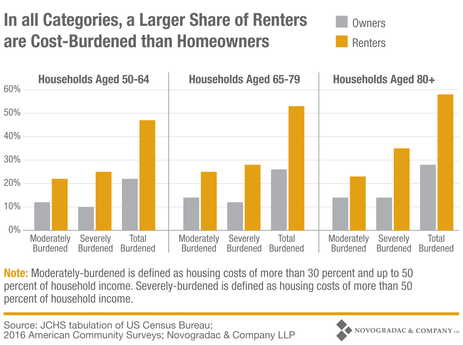 In addition to possible cost burdens, as individuals age accessibility also becomes a concern. Functional limitations—visions, hearing, cognitive, self-care, mobility and independent living difficulty—increase as one gets older. The JCHS study found that a little over one-quarter of older adult households had a member with at least one of these issues.  Just as there is a shortage of affordable housing, there are also not enough accessible homes to meet demand. Based on the most recent data available, homes that are one-level, with no entry steps and extra-wide halls and doorways account for just 3.5 percent of homes in the US. Even fewer homes would be available if additional measures of accessibility were considered. Higher income, wealthier older adult households may have the funds necessary for renovations to make their existing housing more accessible, but renters and low-income homeowners are more likely to rely on limited government assistance to renovate their homes.

For aging households, counting on government assistance can prove problematic as funding for various programs has not kept pace with demand.  The JCHS analysts found that housing assistance is not available for all who need it, stating that only one-third of very low income households age 62 and older who face severe housing cost burdens and/or live in severely inadequate housing received the assistance they needed. Furthermore, HUD’s Section 202 Supportive Housing for the Elderly program saw funding cut from 2016-2017. On a positive note, while there had been no new funding for Section 202 housing since 2012, Congress has appropriated new construction funds for fiscal year (FY) 2018, and is likely to do so again in FY2019. Still, even with modest new funding on the horizon, years with no new supporting housing construction means the supply problems faced by older households have only worsened. Add to all of this the fact that Social Security payments, which many older adult households rely on, have not kept pace with housing costs and there is a large segment of older adult households that are at risk.

This all has great implications for affordable housing advocates as the US already suffers from a shortage of affordable housing, particularly in light of the potential affordable rental homes we stand to lose due to tax policy changes. Congress has taken some steps to recoup some of these homes, but it cannot stop there. In addition to the provisions of the Affordable Housing Credit Improvement Act (AHCIA) that have already been passed, legislators should consider other measures to strengthen the Low Income Housing Tax Credit that can increase the supply of affordable rental housing. While there are no specific AHCIA provisions targeting older adult households, many would surely benefit from those aimed at preserving affordable housing—including the proposed minimum 4 percent credit rate, which would make financing developments that require the preservation of affordable housing more predictable and feasible—and the 50 percent basis boost for projects serving extremely low-income households, a category sure to include a sizable number of adult renter households, particularly those dependent on public assistance and Social Security.

The aging of the baby boomers and increased longevity means there will be considerable numbers of households in their 70s, 80s and 90s, a significant portion of whom will need affordable and accessible housing. With older adults found to be concentrated in certain parts of the country, and more and more in low-density neighborhoods, this would mean that affordable senior housing and services will need to improve in these locales as well. The report concludes that everyone has a part to play in ensuring housing for older Americans is available including individuals, public and private actors, and government at all levels. With the pace at which American households are aging the time is now to prepare to meet the needs of older adult households.