CDFI Fund Awards $175 million for 2020 Capital Magnet Fund Round, the Largest Ever

In its largest award round to date, the U.S. Treasury Department’s Community Development Financial Institutions (CDFI) Fund announced Feb. 22 that more than $175.4 million in Capital Magnet Fund awards (CMF) have been distributed during its sixth funding round. The fiscal year (FY) 2020 award round, as detailed in the 2020 Capital Magnet Fund Award Book, also saw the largest number of award recipients with 48 organizations receiving funds. The 48 awardees were selected from 137 applications, which requested more than $642.2 million in awards this CMF round.

The number of awardees increased from 23 in 2010 to 48 in 2020. The awardees in the sixth round are comprised of 21 nonprofit housing organizations and 27 CDFIs. Included among the awardees were five housing finance agencies (HFAs) representing Colorado, Connecticut, Massachusetts, New Mexico and Rhode Island. The CDFI awardees include 22 loan funds, two banks or thrifts, two depository institution holding companies and one credit union.

Since 2010, the CDFI Fund has awarded 219 CMF allocations to 115 recipients (65 CDFIs, 43 nonprofit housing organizations, and 7 HFAs) in 36 states plus the District of Columbia. Awardees report local, statewide and multistate service areas, CMF funds will be used to serve communities in all 50 states, the District of Columbia and Puerto Rico. Nearly half of recipients of recipients (48%) have received more than one award. 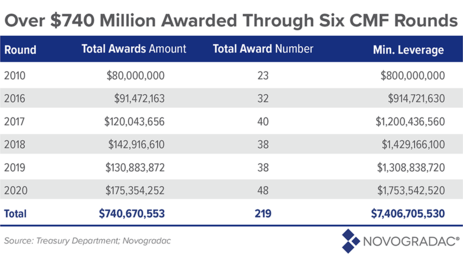 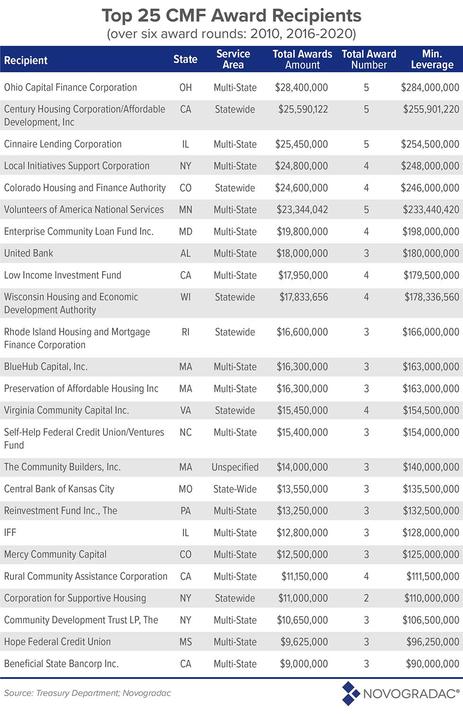 Awardees are required to leverage their awards by a minimum ratio of 10 to 1. Over the six award rounds, more than $740 million in CMF funds have been awarded, representing a required minimum of at least $7.4 billion in private-public investment. However, funds leveraged often exceed the minimum requirement – FY 2020 awardees expect to attract nearly $5.3 billion with their FY 2020 Capital Magnet Fund awards, including more than $4.2 billion in private investment, considerably higher than the $1.75 billion required. Further, the CDFI Fund reported that CMF awardees expect to leverage more than $18.6 billion in private investment for the first five award rounds (2010, 2016-2019), a ratio of nearly 33 to 1 based on the more than $565 million in CMF awards made during those rounds.

As was the case last year, 8% of this round’s awardees plan to support economic development activities including financing community service facilities, such as workforce development or health care facilities.

Each year Novogradac estimates CMF funding, based on the housing government sponsored entities (GSEs) Fannie Mae and Freddie Mac’s  most recent Securities and Exchange Commission (SEC) filings. The FY 2021 CMF estimate, based on 2020 filings, is $370 million, more than double the FY 2020 round award amount due to an increase in single-family mortgage purchases by the GSEs. Increased available CMF funds could translate to larger average awards, an increase in the number awards made or perhaps both in the FY 2021 round. Due to the significant increase in estimated available funding, nonprofits and CDFIs who may not have considered submitting a CMF application in the past should reevaluate doing so when the FY 2021 round opens, likely in two to three months.  Please contact a Novogradac professional for assistance on how to structure a CMF application.