After a delay related to the 35-day partial government shutdown, the U.S. Treasury Department’s Community Development Financial Institutions (CDFI) Fund awarded more than $142 million in Capital Magnet Funds (CMF) during its fourth funding round for fiscal year (FY) 2018 on Feb. 13. The 38 awardees were selected from 116 applications, which requested more than $570 million in awards this CMF round.

The housing government sponsored entities (GSEs) Fannie Mae and Freddie Mac are required by the Housing and Economic Recovery Act (HERA) of 2008 to contribute to the CMF and the Housing Trust Fund (HTF). These funds are to support the preservation, rehabilitation, development or purchase of affordable housing for low-income communities and populations, as well as related economic development and community service facilities such as day care centers, workforce development centers and health care clinics. The GSEs’ contributions to the HTF and the CMF are based on 4.2 basis points of annual new business purchases. After allocations are transferred to the U.S. Department of Housing and Urban Development (HUD) for HTF and the Treasury Department for CMF. HUD distributes HTF funds according to the HTF formula to the 50 states, Washington, D.C. and U.S. territories. The CDFI Fund holds a national competition among nonprofit housing developers and CDFIs for the CMF funding.

Each year Novogradac estimates HTF and CMF funding, based on the GSEs’ most recent Securities and Exchange Commission (SEC) filings. With amounts set aside by the GSEs during 2017 HUD in 2018 awarded $266 million in HTF funding, which it allocated to states and territories. Based on 2018 SEC filings from Fannie Mae and Freddie Mac, Novogradac estimates that HTF funding set aside during 2018 and scheduled to be awarded this year will be about $246 million. Novogradac estimates funding for the CMF set aside during 2018 and expected to be available for the 2019 round will decrease to about $133 million (of which about $2 million is likely to be used for CDFI Fund administration). 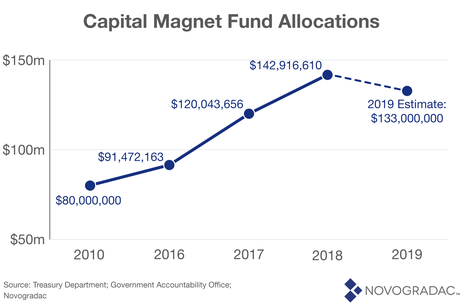 The Capital Magnet Fund Award Book provides a detailed look at the FY 2018 awardees. With this most recent award round, the CDFI Fund has given out more than $434 million through four rounds of funding. As awardees are required to leverage their awards by a minimum ratio of 10 to 1, this represents at least $4.3 billion in private-public investment. Funds have been distributed to a total of 96 awardees since 2010 in 32 states plus the District of Columbia. Nearly a third of recipients have received more than one award.

Total CMF awards have increased in each of the four funding rounds, with the average award increasing to $3.8 million in 2018 from $3.5 million in FY 2010. Looking at the first three funding rounds (2010, 2016 and 2017), it is estimated that more than 44,000 affordable rental homes will be created, in addition to affordable homeownership units. The number of awardees increased from 23 in 2010 to 32 in 2016 and 40 in 2017. In the fourth round, there were two fewer awardees in 2018 but there was an increase in available funding and therefore the average award size. If the amount of leveraged funds generated from CMF awards follows the pattern seen from 2010 to 2017, it is possible that funds leveraged by 2018 awards may exceed the base requirement, thus expanding the reach of the program. FY 2010 awardees leveraged $22 in private funds for every $1 in CMF funding, for a total of $1.8 billion in investments. The combined leveraged investment resulting from FY 2016 and FY 2017 CMF awards was $6.5 billion. It is estimated that $5.5 billion in private-public investment will be realized in regard to 2018 awards, the majority of which – 75 percent – will be attributable to private investment.

Of the 38 awardees for FY 2018, 14 are nonprofit housing organizations, 24 are CDFIs and three are housing finance agencies representing Colorado, Rhode Island and Wisconsin. The CDFI awardees include 22 loan funds, one bank/thrift and one credit union. It is estimated that these awardees will be responsible for the creation of 25,700 affordable homes, 23,000 of which will be affordable rentals. Low-income families will be the primary beneficiaries of this housing development; 95 percent of all homes developed will be for households earning 80 percent or less of the area median income. Twenty-one percent of this round’s awardees plan to support economic development activities including financing community service facilities, such as workforce development or healthcare facilities. Sixty-seven percent of projects planned by 2018 awardees will be located areas of economic distress, 24 percent of awardees plan to invest in rural areas and five awardees plan to invest in areas impacted by hurricanes Harvey and Maria.

The early months of 2019, though not as tumultuous as the balance of 2018, could still bring change to the affordable housing landscape. In May the CMF was threatened with having its $142 million in funding rescinded as part of the proposed $15 billion administration rescission package. Fortunately, Congress voted to keep this funding intact. Also during the year the Trump administration’s fiscal year 2019 budget request called for eliminating the HTF and CMF, but Congress did not agree to that request.

Although the GSEs have already set aside the funding for the 2019 HTF and CMF rounds, Acting Federal Housing Finance Agency (FHFA) Director Joseph Otting must approve the transfers from the GSEs to HUD and Treasury by March 1, and recent reports suggest that Otting is still considering whether to approve the transfers.  Furthermore, Otting or the Trump administration nominee to be the permanent FHFA director, Mark Calabria will also determine whether the GSEs will continue to set aside funds through the course of this year for the potential 2020 rounds. During his hearing before the Senate Banking Committee today, Calabria said that the standard for suspending the GSE contributions was “mechanical” and that he did not anticipate that standard being triggered soon.

Calabria, currently the chief economist for Vice President Mike Pence, has a record exhibiting a significantly different philosophy of housing finance policy and thus is very likely to bring a different mindset to the running of the agency than his predecessor. Calabria’s appointment would likely not only impact the CMF and HTF, but also whether Fannie Mae and Freddie Mac would be permitted to continue LIHTC equity investments. What Calabria’s leadership could mean for housing finance reform and the future of Fannie and Freddie is a concern of a wide variety of affordable housing stakeholders, particularly in light of his past criticisms of the GSEs and their status of being in conservatorship.