This growth coincides with the Biden administration’s new renewable energy goal of using 100% clean energy sources to power the electric grid by 2035, which will help achieve this administration’s 2050 goal of creating a net zero emissions economy.

To achieve these goals, the Biden administration is working to increase clean energy capacity, build more transmission lines for clean power, and increase clean energy storage. The growth of the renewable energy sector in 2021 has helped to lead the country closer to these goals. In 2011, the United States was only producing 125,820 gigawatt hours of solar and wind electricity, but that number grew to 470,141 gigawatt hours in 2020. An estimated 380 million metric tons of carbon dioxide emissions were prevented by using solar and wind energy in 2021 alone. As of the end of 2021, there was a total of more than 110 gigawatts of clean energy projects in operation in the United States, but more is needed to reach the Biden’s administration’s goal.

According to the U.S. Department of Energy, the United States needs to quadruple its solar energy capacity each year to eventually reach 1,000 gigawatts of solar energy capacity to help meet the Biden administration’s goal. Though 2021 saw positive developments and significant growth in the renewable energy sector, much more needs to be done to promote more growth to mitigate the effects of climate change, including further incentivizing renewable energy, removing barriers to entry in the renewable energy market, and investing in an electric grid that designed for renewable energy. The tax incentives within the Build Back Better Act (BBBA), if passed, will help the clean energy sector continue to grow.

As of 2021, 2.7% of electricity generation in the United States comes from solar energy, making it an important part of the renewable energy sector. In 2021, an additional 7.8 gigawatts of new solar capacity was built by the end of the third quarter. This is a 235% increase from 2019 and this new solar capacity is enough to power 1.5 million homes. This brings the total solar energy capacity to 113.5 gigawatts in the United States as of Dec. 31, 2021. Furthermore, a majority of clean energy power purchase agreements in 2021 were for solar energy.

The Build Back Better Act (BBBA) included language from previous bills to expand the solar energy sector within its renewable energy provisions. Two bills were the Green Act (H.R. 848), which was sponsored by Rep. Mike Thompson, D-California, and the Clean Energy for America Act (S. 1298), which was sponsored by Sen. Ron Wyden, D-Oregon. Both of these bills would have provided tax incentives for renewable energy investments and production. Previous bills also included the Solar Energy Manufacturing for America Act (S. 2140, H.R. 5423), which was sponsored by Rep. Dan Kildee, D-Michigan, in the House and Sen. Jon Ossoff, D-Georgia. This bill would provide tax credits for each stage of the solar energy production cycle, making producing solar energy more financially feasible for more investors.

In 2021, the clean energy sector created thousands of jobs and is continuing to do so. In 2021, 415,000 people from across the country worked in this sector, making it a significant job creator. Solar installers and wind turbine service technicians are two of the five top growing jobs in the United States. The Bureau of Ocean Energy Management (BOEM) is working to implement Biden’s 30-gigawatt goal of offshore wind capacity and BOEM’s plan to do so could create 128,000 construction jobs and 48,000 operations and maintenance jobs.

Investing in clean energy provides economic benefits through job creation, contributions to the GDP, and provides environmental benefits. With further investments into this industry, the number of jobs in the clean energy sector could grow to 1 million over the next 10 years. 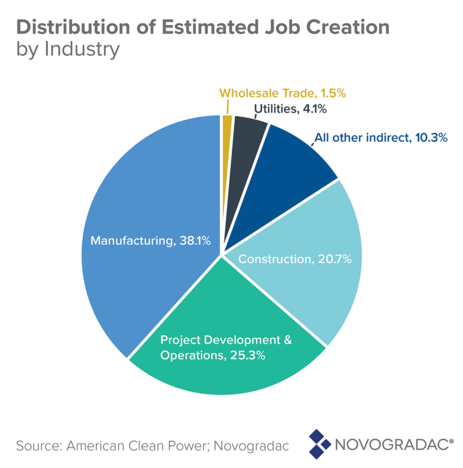 On Jan. 12, 2022, the Biden administration announced initiatives underway that will help lead the country to using 100% renewable energy by 2035. These initiatives include expanding offshore wind and solar projects on public lands. To implement the clean energy initiatives, federal agencies have been announcing new projects that will expand clean energy and create jobs. Some of these projects include expanding offshore wind capacity, especially off the coast of New Jersey and New York; improving how renewable energy projects are reviewed to allow these projects to expand; building more resilient power grids to provide electricity generated from renewable sources to more households; and expanding renewable energy initiatives in rural areas.

One of the largest initiatives comes from the U.S. Department of Energy, which is planning on hiring 1,000 additional employees to implement its Clean Energy Corps. The department recently received $62 billion in clean energy funding from the recently passed Infrastructure and Jobs Act and its ambitious goal is to reduce carbon emissions to 50% to 52% below 2005 levels by 2030.

The passage of the bipartisan infrastructure law was a step forward in expanding clean energy, as it provides $2.5 billion to build new, replace and upgrade transmission lines for the power grid. While the federal agency projects and initiatives will promote clean energy, the passage of the BBBA would expand these initiatives by providing more tax credits for this sector while also creating more jobs.

Current BBBA provisions have the potential to grow the solar energy capacity to 300 gigawatts over the next five years, grow the solar energy market in states with both large and small markets, and add $234 billion to the economy. More details about the clean energy provisions in the Nov. 19 House-passed version of the bill can be found in this previous Notes from Novogradac post.

The BBBA is currently stalled in the Senate as Sen. Joe Manchin, D-West Virginia, has expressed that he will not support the bill as it currently is drafted. Though he has largely supported most of the clean energy tax incentives in the bill, Manchin has expressed opposition to the methane fee of $900 per ton of methane starting in 2023 and the bonus amount in electric vehicle (EV) tax credits made available only to vehicles built in facilities with unionized labor. If the clean energy provisions in the bill are enacted, the clean energy investment tax credit (ITC) and production tax credit (PTC) would be extended by at least 10 years. The PTC would be extended through 2026 and then transition to a technology neutral PTC. The ITC would be extended for projects that begin construction before the end of 2026, and then transition to a technology neutral ITC. As of now, the PTC is expired and the ITC at a rate of 26% has one more year.

Despite Sen. Manchin’s lack of support for the BBBA, he has expressed support for the renewable energy tax credits within the bill despite expressing opposition to many other provisions in the bill. His support provides a greater opportunity for these provisions to pass whether as a part of a pared down BBBA or separately.

Last year saw a significant expansion of renewable energy through increasing the amount of solar and wind energy capacity and generating many jobs. If this sector continues to expand to reach the Biden administration’s goal of 100% electricity generation from renewable sources by 2035, the administration argues the economy will grow while producing positive environmental impacts. While the status of BBBA’s clean energy provisions is currently unclear, Congress will be focusing on preparing the fiscal year (FY) 2022 appropriations bill since the current continuing resolution expires Feb. 18. There will most likely not be much movement on the BBBA in the near term, but Congress and the administration have not given up on the BBBA. Its clean energy provisions are one of the highest priority set of proposals in the bill keeping the overall bill alive, and are likely to be retained in a pared down version of the BBBA.

However, if even a pared down BBBA fails to advance, Congress could expand the clean energy sector through tax legislation that could be added to FY 2022 appropriations legislation. Through the appropriations process, Congress could extend the PTC, which has currently expired for projects that did not commence construction by the end of 2021, and the ITC, as the 26% ITC expires at the end of this year. However, if renewals and expansions to these tax credits are added to the appropriations bill, these extensions will likely be much less ambitious than those in the BBBA due to needing 60 votes in the Senate. Extensions at this level would fall short of the Biden administration’s clean energy goals. Last year’s renewable energy growth was promising, but much more needs to be done to meet the 2035 goal of 100% renewable energy.