As Congress continues to debate tax reform, how differences between the House and Senate bills will be reconciled in a final bill  is crucial for affordable housing advocates. In particular, the tax exemption for private activity bonds (PABs) provides a stark contrast on what a post-reform tax code might mean for affordable housing.

Some policymakers have questioned the need for both the federal subsidy associated with the tax exemption for PABs and the 4 percent low-income housing tax credit (LIHTC) authority that those PABs generate. These policymakers have asked if combining the LIHTC with PABs is a type of “double dipping” that provides excess subsidy to affordable housing developments.  That answer is a clear “no.”

Many activities benefit from more than one form of federal support–and affordable rental housing is (and should be) no exception. The mere fact that two or more programs are available at the same time does not mean the government is providing too much subsidy. What matters is the aggregate amount of subsidy and what is being incentivized. (An example from another context would be farm owners collecting both price guarantees (to ensure a minimum market price) and subsidized crop insurance (to protect farmers from droughts, floods, and the like).

In the instance of PABs and 4 percent LIHTC, there are two forms of support:

Both benefits are limited, and when combined don’t represent excessive, duplicative sources of federal subsidy. As is common with affordable rental housing finance, subsidies from different sources are crucial to make properties financially feasible.  Alone each source would not be able to finance most affordable rental housing properties and so should not be considered “double-dipping” when combined.

Internal Revenue Code Section 42 allows the 4 percent LIHTC only if more than half of a property’s costs are covered by PAB financing. Congress specifically intended the resources to apply at the same time. Congress also imposed limitations on the type of development costs that PAB can finance.  Tax credits are also limited to the portion of the property rented to low-income families at restricted rents.

Although called the 4 percent LIHTC, the amount actually fluctuates. Recently the range has been between 3.2 and 3.4 percent. The annual amount of tax credit is this floating percentage, multiplied by certain development costs, for a decade. For example, a rate of 3.23 percent applied to $10 million in costs would generate $3.23 million in tax credits over 10 years.

If an investor is willing to place $0.90 for every dollar of offset liability, the result is $2.907 million in equity. Considering a typical PAB-financed property could have $1 million in development costs that do not qualify (e.g., land, reserves, certain legal fees, etc.), the 4 percent LIHTC may result in subsidizing as little as a quarter of the development costs. The remaining sources are typically PABs (must be at least 50 percent of development costs to qualify for LIHTC) and other debt, such as general partner loans.

This table breaks down the capital sources of a typical PAB-financed 4 percent LIHTC development: 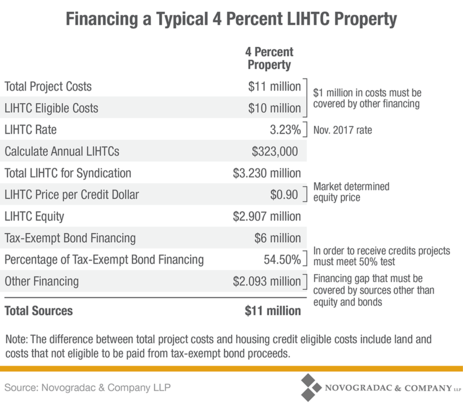 Despite the shallow subsidy, PABs and 4 percent LIHTCs are an extremely important resource. Novogradac & Company estimates the programs will be responsible for producing about 700,000 affordable rental homes by 2027. As such, it is crucial they survive any changes resulting in the current tax reform discussion.

Help Rewriting QAPs Provides Opportunity for Clarity, Simplification
Rising Stars: Novogradac Spotlights Younger Leaders in Community Development
ESG Investing: Where it is Now; Where it’s Headed; What to Do
END_OF_DOCUMENT_TOKEN_TO_BE_REPLACED