Congressional leaders Wednesday announced agreement on a $1.29 trillion fiscal year (FY) 2018 omnibus spending bill, of which nearly $700 billion was for defense and $591 billion for nondefense. According to the House Appropriations Committee release, the bill provides full-year appropriations legislation and funding for the 12 annual appropriations bills through the end of FY 2018 (Sept. 30) and includes a $60 billion increase in nondefense spending over current funding levels.

For the U.S. Department of Housing and Urban Development (HUD), the bill provides $52.75 billion in gross discretionary spending and $42.7 billion in net appropriations, according the House Appropriations Committee Transportation-HUD summary. The gross spending level is $4.69 billion (9.8 percent) more than the amount appropriated in FY 2017, $4.71 billion (9.8 percent) more than the House FY 2018 bill, and $2.8 billion (5.6 percent) more than the Senate FY 2018 bill. Given the budget challenges facing nondefense and HUD spending, this represents a historic increase and amount of funding for HUD, and a tremendous achievement for the affordable housing community.

This omnibus spending bill and the funding levels for HUD were made possible by the Bipartisan Budget Act of 2018, which increases the nondefense spending caps for FY 2018. 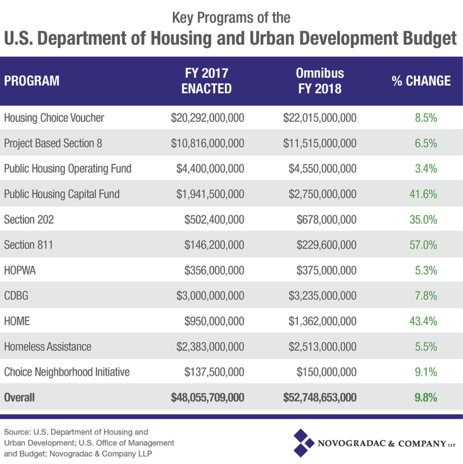 The bill provides $11.5 billion for Project-Based Rental Assistance, which is $699 million (6.5 percent) more than FY 2017. This funding level should be sufficient to renew all contracts. The bill rejects the administration’s rent-reform proposals.

Tenant-Based Rental Assistance is proposed to be funded at $22.0 billion, which is $1.7 billion (8.5 percent) more than FY 2017. Of that amount, $19.6 billion is for Section 8 Housing Choice Voucher contract renewals, which is $1.25 billion (6.8 percent) more than FY 2017. It appears this level of funding would be sufficient to renew all vouchers in use, and like PBRA, rejects the rent-reform proposals. The omnibus provides $20 million to support new incremental family unification vouchers to prevent youth from becoming homeless after exiting foster care. For the HUD-Veteran Affairs Supportive Housing (HUD-VASH) program, the bill provides $45 million, which is $2 million less than FY 2017. Within the HUD-VASH amount, $5 million is set aside for Native American veterans. The bill also provides $85 million for Tenant Protection Vouchers, a $25 million (22.7 percent) decrease from the FY 2017-enacted level.

In stark contrast with the administration’s austere requests, the omnibus provides $2.75 billion for the Public Housing Capital Fund, which is $809 million (41.6 percent) more than FY 2017, and $4.55 billion for the Public Housing Operating Fund, which is a cut from FY 2017. The funding increases are also remarkable, especially for the Capital Fund, and will help ensure that Rental Assistance Demonstration (RAD) conversions are financially feasible.

The FY 2017 omnibus bill increased the cap on the Rental Assistance Demonstration (RAD) program from 185,000 to 225,000 public housing units, enabling all pending applications to go forward as well as a few others, and extended program authorization for public housing conversions to 2020. The administration has proposed to repeal the unit cap in recent budget requests, including for FY 2018. The FY 2018 omnibus bill continues to build on these efforts by increasing unit authorization cap to 455,000, extends program authorization to 2024, and for the first time, authorizes RAD conversions of the approximately 120,000 units in Section 202 properties with Project Rental Assistance Contracts (PRAC). However, the bill does not provides any incremental funding to facilitate such conversions, unlike the Senate FY 2018 bill, which provided $4 million. It should also be noted that the administration has requested $100 million in incremental funding for all RAD (not just Section 202 PRAC) in its FY 2019 request.

McKinney-Vento Homeless Assistance Grants are proposed to be funded at $2.51 billion, a $130 million (5.5 percent) increase over FY 2017 funding. This amount includes a $2.11 billion set-aside for the continuum of care and rural housing stability assistance programs, and $270 million for Emergency Solutions Grants.

The bill provides $678 million for the Housing for the Elderly (Section 202) program, a $176 million (35.0 percent) increase over FY 2017 levels. It also provides $105 million for new capital advances or Project Based Rental Assistance Contracts (PRAC), a tremendous achievement building on the $10 million provided in FY 2017. Before FY 2017, the last fiscal year with capital advance funding was FY 2010. The Housing for Persons with Disabilities (Section 811) program is funded at $230 million, a $83.4 million (57.0 percent) increase from FY 2017, another historic amount and highest percentage increase among major HUD programs. The budget would provide $375 million for the Housing Opportunities for Persons with AIDS (HOPWA) program to provide housing and supportive services to persons living with HIV and AIDS, which is a $19 million (5.3 percent) increase from FY 2017.

The bill provides $150 million for the Choice Neighborhoods Initiative, which is designed to comprehensively revitalize high-poverty public and assisted housing communities, which is $13 million (9.1 percent) more than FY 2017. The FY 2018 budget proposes to eliminate funding for this program, and not only does the FY 2019 request as well, but also proposes to rescind $137 million in unobligated funding.

The FY 2018 omnibus bill includes $250 million for the CDFI Fund, a $2 million (0.8 percent) increase from FY 2017, but a $236 million (94.4 percent) increase from the FY 2018 (and FY 2019) request. Congress rejected the administration’s proposals to eliminate all grant funding and only provide $14 million in administrative funding for the new markets tax credit and CDFI Bond Guarantee programs. Within this amount, the bill provides $160 million for financial awards and technical assistance. The omnibus also provided $500 million in guarantee authorization level for the CDFI Bond Guarantee program level with FY 2017.

The House passed the FY 2018 omnibus bill today and the Senate will now consider it. The current continuing resolution (CR) expires Friday, and unless a Senator makes a procedural objection, the omnibus bill is expected to pass both chambers and signed by the president before the CR expires.

Meanwhile, as the budget and appropriations process for FY 2018 approaches its conclusion, the process for FY 2019 has already begun. On Feb. 12, the Trump administration released its FY 2019 budget. According the FY 2019 budget, the administration is proposing $41.2 billion in gross appropriations, an $11.5 billion (21.8 percent) cut from the FY 2018 omnibus spending level for HUD, and only $14 million for the CDFI Fund, a $236 million (94.4 percent) cut from the FY 2018 omnibus bill.

Given the substantial funding cuts in the FY 2019 budget request and the usual difficulty in passing annual spending bills in an election year, it will be very difficult for Congress to draft and pass all 12 annual spending bills by Sept. 30, including those providing funding for HUD and Treasury, even if Congress has already. Many policy insiders expect Congress to consider a CR to fund the government past Sept. 30.