Congressional leadership yesterday announced agreement on a $1.07 trillion fiscal year (FY) 2017 omnibus spending bill. According to the House Appropriations Committee release, the bill provides full-year appropriations legislation and funding for the 11 remaining annual appropriations bills through the end of FY 2017 in September, and includes a $25 billion increase in defense spending over current funding levels and $1.5 billion towards border security, but did not propose any reductions in nondefense spending to offset that increase. 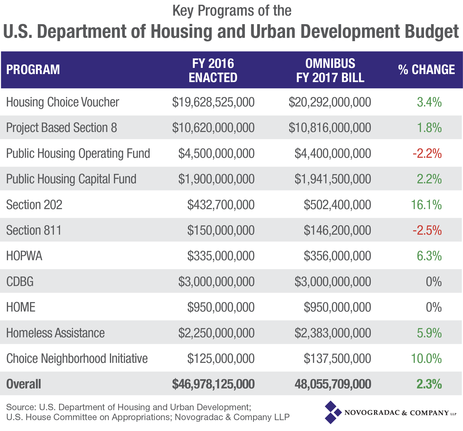 The bill provides $10.8 billion for Project-Based Rental Assistance, which is $196 million (1.8 percent) more than FY 2016. This funding level should be sufficient to renew all contracts. HUD still needs to conduct procurement for contact administrators, and it is unclear if HUD is planning any budget adjustments resulting from this procurement to take effect in the full FY 2018 budget request.

Tenant-Based Rental Assistance is proposed to be funded at $20.3 billion, which is $663 million (3.4 percent) more than FY 2016. Of that amount, $18.4 billion is for Section 8 Housing Choice Voucher contract renewals, which is a $670 million (3.8 percent) increase over FY 2016. It appears this level of funding would be sufficient to renew all vouchers in use. The omnibus provides $10 million to support new incremental family unification vouchers to prevent youth from becoming after exiting foster care. For the HUD-Veteran Affairs Supportive Housing (HUD-VASH) program, the bill provides $47 million, which is $13 million less than FY 2016. Within the HUD-VASH amount, $7 million is set aside for Native American veterans.  The bill also provides $110 million for Tenant Protection Vouchers, a $20 million (15.4 percent) decrease from the FY 2016 enacted level.

Community Development Block Grant (CDBG) formula grants are proposed to be funded at $3 billion, equal to FY 2016. President Trump requested to cut $1.5 billion from FY 2017 CDBG funding to offset an increase in defense spending, but the omnibus rejected that proposal.  After last year’s proposed near elimination in the Senate, the omnibus bill provides $950 million for the HOME Investment Partnerships Program (HOME), equal to FY 2016. HOME program funding is nearly half FY 2011 levels in 2017 dollars.

In addition to his proposed FY 2017 cut to CDBG, the president has proposed eliminating funding for both CDBG and HOME in his FY 2018 budget blueprint.

McKinney-Vento Homeless Assistance Grants are proposed to be funded at $2.38 billion, a $133 million (5.9 percent) increase over FY 2016 funding. This amount includes a $2.02 billion set-aside for the continuum of care and rural housing stability assistance programs, and $310 million for Emergency Solutions Grants.

The bill provides $502 million for the Housing for the Elderly (Section 202) program, a $69.7 million (16.1 percent) increase over FY 2016 levels. Within that amount, the bill provides $10 million for new construction or new senior projection rental assistance contracts (PRACs), at HUD’s discretion, the first potential new construction increase since 2011.  The Housing for Persons with Disabilities (Section 811) program is funded at $146 million, a $3.8 million (2.5 percent) cut from FY 2016 funding levels. The budget would provide $356 million for the Housing Opportunities for Persons with AIDS (HOPWA) program to provide housing and supportive services to persons living with HIV and AIDS, which is a $21 million (6.3 percent) increase from FY 2016.

The bill provides $138 million for the Choice Neighborhoods Initiative, which is designed to comprehensively revitalize high-poverty public and assisted housing communities, which is $13 million (10 percent) more than FY 2016.  The FY 2018 budget blueprint proposes to eliminate funding for this program.

The FY 2017 omnibus bill includes a record funding level for the CDFI Fund:  $248 million, a $15 million (6.2 percent) increase from FY 2016.  Within this amount, the bill provides $162 million for financial awards and technical assistance, an $8 million (5.3 percent) increase from FY 2016 and an increase of $3 million for administrative expenses to help the CDFI Fund manage its growing portfolio of programs, including the $7 billion combined new markets tax credit round award in 2016.  The omnibus also provided $500 million in guarantee authorization level for the CDFI Bond Guarantee program, a cut of $250 million (33 percent) from FY2016, but equal to the Senate bill and $500 million more than the House bill.  The FY 2018 budget blueprint proposes to eliminate all grant funding for the CDFI Fund.

The House is expected to consider the FY 2017 omnibus bill May 3 and the Senate shortly thereafter.  The current continuing resolution (CR) expires May 5, and the omnibus bill is expected to pass both chambers and signed by the president before the CR expires.

Meanwhile, as the budget and appropriations process for FY 2017 approaches its conclusion, the process for FY 2018 has already begun.  On March 16, the Trump administration released its FY 2018 budget blueprint, and the full, program-by-program, detailed FY 2018 budget request is expected later in May.  According the FY 2018 budget blueprint, the administration is proposing $40.7 billion in gross appropriations, a $7.4 billion (15.3 percent) cut from the FY 2017 omnibus spending level for HUD, and only $23.5 million for the CDFI Fund, a $224 million (91 percent) cut from the FY 2017 omnibus bill.

Given the sharp funding requests in the FY 2018 budget blueprint and the return of sequestration under tight overall discretionary spending caps, it will be very difficult for Congress to draft and pass all 12 annual spending bills, including those providing funding for HUD and Treasury.  Many policy insiders expect Congress to consider a CR to fund the government past Sept. 30, and possibly for the entire fiscal year.  The prospect for a full-year CR in FY 2018 places extra importance in getting a full-year omnibus appropriations bill passed for FY 2017.