As Congress Begins to Draft Infrastructure Reconciliation Legislation, Senate and House Have Competing Visions for the Future of Renewable and Clean Energy Tax Credits

With the passage of the fiscal year (FY) 2022 budget resolution Aug. 24, Congress is turning to drafting $3.5 trillion infrastructure legislation.  In addition to community development tax incentives, a significant portion of the funding will be devoted to renewable and clean energy tax incentives and when drafting that of the bill, Congress will likely draw inspiration from two major pieces of federal energy tax legislation: S. 1298, the Clean Energy for America Act (CEAA), and H.R. 848, the Growing Renewable Energy and Efficiency Now Act of 2021 (GREEN Act). In fact, many provisions from the GREEN Act were part of last year’s House infrastructure bill, H.R. 2 (116th Congress), the Moving Forward Act. Both the CEAA and GREEN Act overlap with the administration’s infrastructure priorities as included in the American Jobs Plan and the Treasury FY 2022 Greenbook of tax proposals.

CEAA was introduced April 22 by Senate Finance Committee Chairman Ron Wyden, D-Oregon, and includes investment tax credit (ITC) and production tax credit (PTC) proposals that represent a significant departure from the existing structure of the current law renewable energy tax credits (RETCs). The GREEN Act, introduced Feb. 4 by House Ways and Means Select Revenue Measures Subcommittee Chairman Mike Thompson, D-California, would extend the existing RETCs and provide other enhancements, an improvement of the status quo; however, it would not be a significant departure from the current RETC structure.

The CEAA would provide a 10-year PTC of 2.5 cents per kWh for electricity produced by any zero-emissions power facility, regardless of technology used to generate the power. The bill would also provide an ITC of 30% of qualified facility basis, with an additional 10% available for facilities in disadvantaged communities. As with the PTC, any zero admissions facility would be eligible. Grid improvements, microgrids and stand-alone storage facilities would be eligible property. Systems in excess of one MW would have to meet Davis-Bacon prevailing wage and apprenticeship requirements. Phase out of the credit would begin when U.S. greenhouse gas emissions are 75% less than the levels in 2021. The Internal Revenue Code (IRC) Section 45L tax incentive for energy efficient homes would be made permanent, offering $2,500 for homes meeting “Energy Star” requirements, and $5,000 for homes meeting “Zero Energy Ready” requirements. These credit amount would be adjusted by inflation annually.  The IRC Section 179D energy efficient commercial property deduction (which also can be used in multifamily housing) would be modified to operate on a sliding scale, so that any taxpayer qualifies for an incentive as long as they make improvements to efficiency of at least 25% of the required baseline. The deduction has a value of between $2.50 and $5 per square foot depending on the amount of the efficiency gains relative to the required baseline.

The GREEN Act would extend the 30% ITC for qualifying technologies, such as solar, that begin construction before 2026 and the 60% PTC for wind facilities and other qualifying technologies that begin construction before 2027.  For the ITC, credits for solar and geothermal, and other eligible property would return to 30% for facilities beginning construction between Jan. 1, 2021 and Dec. 31, 2025, with step-downs to 26% during 2026, 22% during 2027, and 10% thereafter. Additionally, the bill would add offshore wind (though without the 60% reduction other wind facilities receive), stand-alone energy storage, linear generators, and biogas facilities as ITC eligible property. To be eligible for more than 10% credit, these properties would need to be placed in service before Jan. 1, 2031. Under the GREEN Act, the 45L tax credit would be extended five years, and the incentive increased to $2,500.

Comparing and Contrasting the Bills

Under the CEAA, the PTC would remain a 10-year credit, with the CEAA rules taking effect on Dec. 31, 2022. As previously discussed, these rules would give any zero-emissions power facility a credit of 2.5 cents per kWh.  The ITC would be equal to 30% of qualified facility basis, with an additional 10% if in disadvantaged communities. Under the GREEN Act the PTC for wind, landfills, and hydropower would receive an extension if construction of the qualifying facility begins construction before the end of 2026. The phase-out at 60% would be retained. The ITC would be increased back to 30% for facilities beginning construction after before Dec. 31, 2026. After that date the credit would stepdown to:

Under CEAA, 45L would be made permanent as opposed to only a five-year extension under the GREEN Act. They would both offer the $2,500 credit, while CEAA offers a $5,000 credit for achieving more energy savings.  CEAA would also base the energy savings determination on more contemporary standards.  Section 179D would change to a sliding scale under CEAA, while the GREEN Act would offer a $3 deduction per square foot to any facility achieving its 30% energy cost reduction threshold.

The two bills diverge regarding the direct pay option as well. In CEAA, taxpayers may elect for a refundable credit equal to the credit amount. The election must be made prior to date construction of the facility begins; this will apply to facilities placed in service after Dec. 31, 2022. The election could be made by partnerships or S corporations. Partners and shareholders would receive no share of the credit. There would be no partial option; taxpayers could opt in for the entire amount or none. Under the GREEN Act taxpayers could elect to create a refundable credit equal to 85% of the ITC, PTC or 45Q carbon oxide sequestration credit that would otherwise be carried forward. For tribal governments the credit would be 100%. The option would be applicable to any properties placed in service after the bill is enacted. Taxpayers could opt for all or a portion of credits.

A key point of contrast between the two pieces of legislation relates to what’s known as the “normalization rules.” Under current law, normalization requires certain regulated utilities to pass along tax savings to customers over time. Under CEAA, these utilities would have the ability to opt out of the normalization rules with respect to grid improvement property as well as any energy storage property in excess of 500kWh.

The two bills differ on their approach to labor rules as well. Large systems (in excess of 1 MW) would be required to adhere to provisions of the Davis-Bacon Act and apprenticeship rules under CEAA. Thus, any workers on such project would be required to be paid local prevailing wages, and at least 15% of workers would have to be employed by way of government registered apprenticeship programs. Meanwhile, the GREEN Act would create labor standards with a new certification standard to create qualified entities. It would include prevailing wage and apprenticeship requirements. All contracts over $25 million would also require a labor agreement.

CEAA would simplify the tax incentive structure in a number of ways compared to the GREEN Act. CEAA would make these tax credits permanent, as opposed to the GREEN Act merely extending various credits. Additionally, CEAA would adopt a technology neutral approach, meaning as long as zero emissions is achieved the means of doing so does not impact the credits given. On the other hand, the GREEN Act involves complicated rules surrounding which technologies receive credits, as detailed in the summaries below. 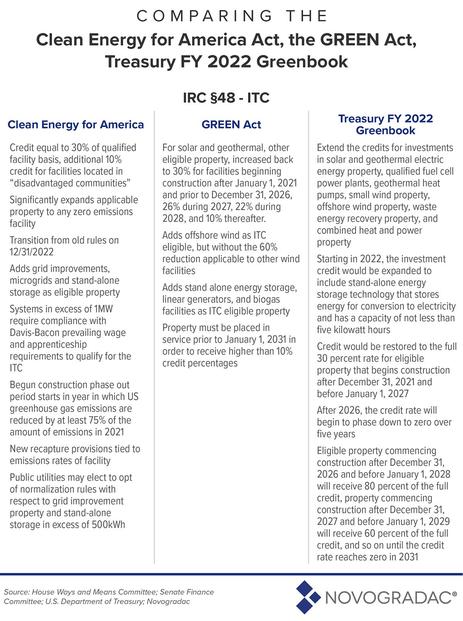 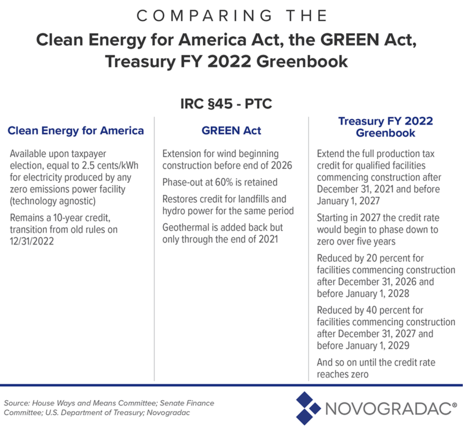 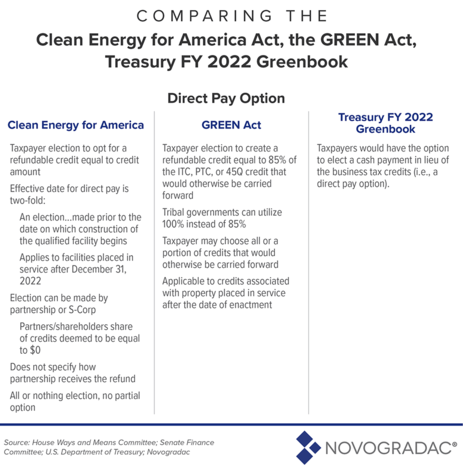 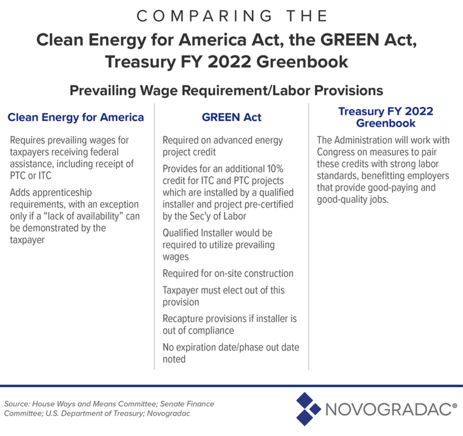 While the House is attempting to pass its reconciliation bill before Oct. 1, it may not be able to reach that goal, and the Senate is likely going to take even longer.  Ultimately, the real target for passing the final reconciliation legislation may be before Christmas in December.