This post is part of a series on QAPs:

As noted in preceding posts, a premise for the program is demand for low-income housing tax credits (LIHTCs) exceeding supply. This certainly has been true for 9% LIHTCs in every state for decades, and it’s increasingly the case for the private activity bond volume associated with 4% LIHTCs.

Many LIHTC participants want allocating agencies’ implementation to both:

Such a perspective is totally understandable: Competition driving excellence is a core American value, and applying for LIHTCs is a major investment in most states. However, an unfortunate reality is that these two objectives are mutually exclusive.

The dichotomy is not just true for QAPs, but for life in general. For example, consider NCAA “March Madness” and elections with popular incumbents: The former defies prediction and the latter are rarely competitive. If it’s optional to try, why do so when losing is guaranteed?

Note the distinction between certainty of how an application scores and which ones receive an award. In casual conversation these are easy to conflate, but they are importantly different.

Ultimately the result-deciding selection criteria compare LIHTC applications in ways developers cannot foresee and/or control. A common manifestation is ending in one or more tiebreakers. Some parties see that as the other categories failing, when usually it’s inevitable.

The triple constraint theory, also known as the project management triangle, is sometimes encapsulated by saying, “Good, fast, cheap. Choose two.” A similar dynamic is present with result-deciding selection criteria. With just a few exceptions, QAP selection factors can be any two of the following, but not all three:

Attempting to have all three nearly always means one doesn’t happen. The better practice, for both drafting and commenting, is to accept this fact and build policies around it.

Race to the Bottom

Consequential provisions can morph into a variation known as “race to the bottom” criteria. Examples include promising the lowest of LIHTCs/unit, rents charged, or development costs. Almost invariably these provisions follow a pattern of becoming less realistic over time:

Many consider the pattern above to be the fault of applicants, as in “They should not make poor choices or impossible promises.” While an understandable reaction, it’s partly unfair. The applications simply reflect the policies’ intent, and not doing so enough means losing. Zero chance of success. 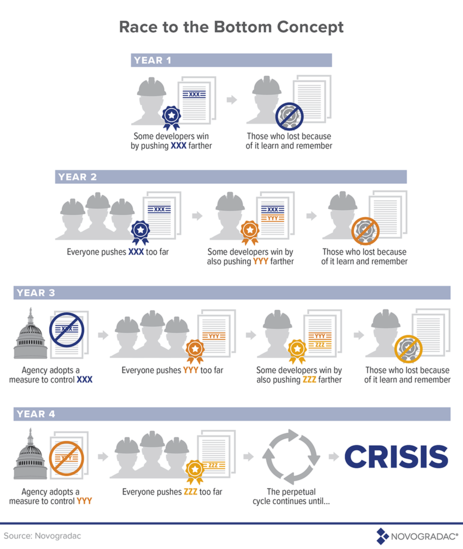 By contrast, if an awarded proposal starts off with an unrealistic limitation/requirement, at least theoretically there’s time to work out a successful solution. Whether such hopefulness makes sense is a question. Generally speaking, developers are more optimistic by nature, so their answers might be different than others.

As with everything in LIHTCs, the “only two” rule above has few exceptions. If drafted correctly, the following reflect all three qualities—they can be consequential, predictable and realistic:

The key is none are entirely under a developer’s control to make happen. Each requires a unique circumstance to exist and/or assistance from a third party, usually a unit of local government (note enactment of AHCIA would limit local government funding as an option).

Applicants ending up below the award line because of these provisions sometimes advocate for changes. The arguments often relate to fairness, as in others have an unjust advantage. Depending on the facts, the claims may be correct.

The main reason for this post is to help all parties see the inherent limitations. Those drafting QAPs or submitting comments can do a better job with both when free from misconceptions of what’s possible.

Help Rewriting QAPs Provides Opportunity for Clarity, Simplification
Rising Stars: Novogradac Spotlights Younger Leaders in Community Development
ESG Investing: Where it is Now; Where it’s Headed; What to Do
END_OF_DOCUMENT_TOKEN_TO_BE_REPLACED