The supply and demand imbalance that applies throughout the housing market, but especially among affordable homes, has led the cost of housing to rise significantly and required higher household incomes to afford housing. Creating a Neighborhood Homes Tax Credit (NHTC) and expanding the low-income housing tax credit (LIHTC) could increase the supply of affordable housing while also reducing the rate of inflation by providing this needed housing.

High housing cost contributes, in part, to the current high levels of inflation and pushes homeownership and affordable rents out of reach for many. Housing is the single largest component of the consumer price index, or CPI, comprising 33% of the basket of goods used to determine the index, which is commonly used to measure inflation. The United States Bureau of Labor Statistics (BLS) reported Feb. 10, 2022, that the CPI for urban consumers increased 0.6% from December 2021 to January 2022 and shelter cost was one of the main contributors to this monthly increase along with food and electricity. The graph below shows percentages of the different contributors to the CPI as of January 2022. More details regarding the contributors to the January 2022 CPI can be found from the Bureau of Labor Statistics. 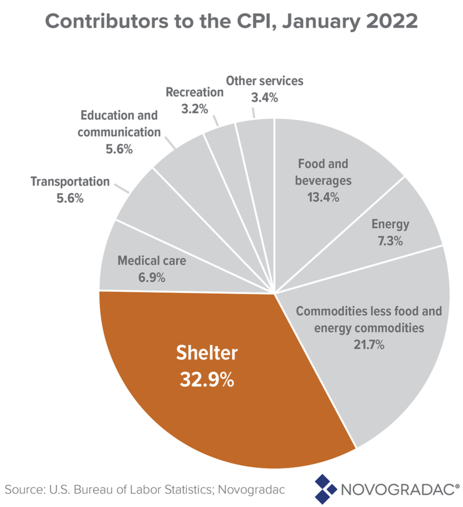 The affordable housing crisis predates the COVID-19 pandemic, but conditions have worsened during the pandemic due to the skyrocketing housing costs caused by fewer people moving, high construction costs and economic hardships caused by the pandemic. Since the 2007-2008 financial crisis, an estimated average of 150,000 fewer homes a year have been built than needed based on estimates from The Washington Post. According to these estimates, this totals to about a 1.7 million home deficit in the United States, thus forcing demand to outpace supply and increasing costs.

The cost of housing has risen significantly. Jim Parrott, a former Obama administration housing official, and Mark Zandi, the chief economist at Moody’s, reported that over the last 10 years, home prices have more than doubled and they have risen by about 20% within the last year alone. The average rent has increased by 13.5% across the country and risen by about 20% in some large metropolitan areas, according to Parrott and Zandi.

These drastic increases in housing have contributed to sharp increases in inflation. While other supply-chain challenges seen during the pandemic are being addressed, as reported by Parrott and Zandi, thus working to mitigate inflation, the high costs of housing and lack of adequate supply will continue to be the main drivers of inflation unless Congress creates policy to address these issues. The drastically rising costs of housing are not sustainable and without building more homes, the costs will continue to surge, thus keeping inflation at a high rate. The NHTC and the LIHTC could finance more needed housing, which would help address inflation.

The NHTC was originally proposed in the Neighborhood Homes Investment Act (H.R. 2413, S. 98) and Decent, Affordable, Safe Housing (DASH) Act and is a provision of the BBBA. The NHTC, if passed as drafted in the BBBA, would provide $3 per-capita and a $4 million small state minimum in the first three years, as adjusted for inflation, to finance affordable homes in distressed communities. Most of these homes would be affordable starter homes, as there is a supply shortage of these homes.

Expansion of the LIHTC is also a part of the DASH Act and the Affordable Housing Credit Improvement Act, both of which increase 9% allocations along with other provisions. The LIHTC also finances virtually all new and substantially rehabilitated affordable rental housing annually and has financed more than 3.6 million affordable rental homes since 1987, according to the National Council of State Housing Agencies (NCSHA). In recent years, about 75% of 9% LIHTC allocations have financed new construction properties, according to NCSHA. Furthermore, the enactment of the 4% floor has made financing new construction with 4% LIHTC more financially feasible and will likely increase the percentage of new construction properties financed by 4% LIHTCs.

More details on the revised provisions of the NHTC and the House’s LIHTC provisions can be found on this previous Notes from Novogradac post.

Homeownership often leads to more opportunities to build wealth, but coming up with the down payment and closing costs are significant barriers to homeownership. There are economic disparities between white households and households of color, leading to  a 30% difference between the white and Black homeownership rate (72% of white households are homeowners compared to only 42% of Black households) at the end of 2021. Though the Fair Housing Act was passed in 1968 and was designed to help address the disparity in housing opportunities for households of color, this gap still persists, as the Black homeownership rate has only increased by 1.5% from 1970 to 2021 while the white homeownership rate increased 9.2% from 1970 to 2021. The NHTC would help to close this gap by building affordable owner-occupied homes in eligible census tracts located in urban, suburban and rural areas. According to the Black Homeownership Collaborative and reported through Housing Wire, 63% of households who live in these eligible census tracts are people of color. 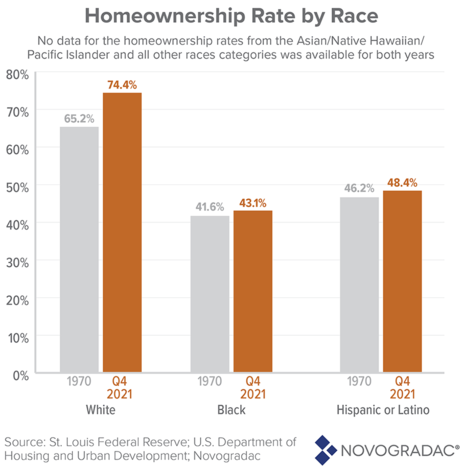 Establishing the NHTC and expanding the LIHTC are included in the latest version of the BBBA. Though the BBBA is stalled in the Senate due to the lack of support from Sen. Joe Manchin, D-West Virginia, there are still ongoing efforts to restart negotiations on a revised reconciliation bill. The housing provisions in the BBBA ($150 billion in spending, $12 billion in LIHTC expansion, and $6 billion for NHTC) are at risk of being cut, but advocates are working to urge Congress to retain these provisions in whatever reconciliation bill may advance in the future. While the BBBA’s future is uncertain, the bill’s housing provisions could finance close to 1 million affordable homes, which could mitigate some of the effects of inflation by increasing the supply of housing and help close the racial homeownership gap.

If the NHTC were  enacted, state housing agencies will be responsible for administering it and will need to draft qualified application plans before the NHTC would be able to finance new affordable homes. The Neighborhood Homes Tax Credit Working Group, hosted by Novogradac, will help state agencies and other stakeholders stay up to date on the progress of the NHTC and give members the opportunity to work together on consensus proposals to advise U.S. Department of the Treasury, Internal Revenue Service, and state agencies on how best to implement the incentive. To join the working group, click here.

Analysis of the DASH Act
END_OF_DOCUMENT_TOKEN_TO_BE_REPLACED