Through its numerous provisions, the Decent, Affordable, Safe Housing for All (DASH) Act, announced by Senate Finance Committee Chair Ron Wyden, D-Oregon, strives to increase housing affordability, most notably through the tax code. All told, the DASH Act represents a significant investment towards addressing the affordability crisis facing low- and middle-income renters, low-income homeowners and Americans facing and at risk for homelessness.

In addition to expansion of the low-income housing tax credit (LIHTC), and the proposed middle-income housing tax credit (MIHTC) and neighborhood homes tax credit (NHTC), the DASH Act would further increase rental housing affordability by providing a renter’s tax credit. The renter’s tax credit would be a refundable credit to taxpayers who own and operate affordable rental housing with units affordable to extremely low-income (ELI) tenants – those with a gross monthly family income at or below 30% of the area median (AMI) or at or below the federal poverty line, whichever amount is greater. The tax credit creation and expansion proposed in the DASH Act would be complemented by affordable housing spending provisions also included in the bill:

The DASH Act is not the first bill to propose a renter’s tax credit. On July 29, Wyden and Brown introduced S. 2554, the Renters Tax Credit Act of 2021, which is identical to the DASH Act proposal . During the 116th Congress, Sen. Charles Schumer, D-New York, along with 25 co-sponsors, introduced S. 5065 (116th), the Economic Justice Act, a plan to invest $350 billion in communities of color, which included the creation of a renters’ tax credit that would limit rent to 30% of a tenant’s income. Starting in 2011, through 2017, the Center on Budget and Policy Priorities (CBPP) proposed a renter credit aimed at assisting extremely low-income (ELI) households, to be claimed by rental housing owners that cap rents at 30% of eligible tenants’ income. The CBPP proposal noted several similarities to the LIHTC—for example, how the credit was claimed—and considered the renter tax credit to be complementary to the LIHTC.

Specifically, the DASH Act proposes a project-based renter tax credit targeted to ELI households. The credit would be allocated to states and calculated based 110% (or up to 120% in low poverty neighborhoods) of the difference between fair market rent (FMR) and 30% of a renter’s gross family income. The total annual credit would be equal to the number of months of reduced rent for eligible renters in a given taxable year times the number of eligible units in a building, summed across all buildings owned by the taxpayer. The allocation to states would be as follows: 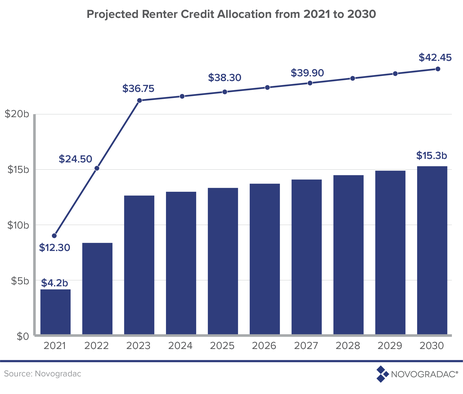 Similar to LIHTC qualified allocation plans, states would be required to create a rental reduction allocation plan for the renter credits, detailing the criteria and priorities the state agency would use to allocate credits and report annually on compliance. The credit period would be up to 15 years, with credits claimed by eligible taxpayer owners on an annual basis. State would be required to establish a reserve that would allow for the transfer of credit ceiling between taxpayer owners who over-estimated amounts with those that under-estimated amounts.

The renter’s credit would be used in conjunction with the LIHTC (the U.S. Department of the Treasury would provide coordination rules), as well as in unassisted buildings. At an eligible property, the number of units assisted could not be more than the greater of 40% of the building units or 25 units, unless the building previously received federal project-based rental assistance. Owners would be required to periodically re-certify income eligibility of renters and adjust rent reductions as necessary. Additionally, owners could not evict renter credit-assisted tenants, except for good cause, and would be required to comply with the Fair Housing Act and other applicable federal and state housing laws.

The DASH Act also proposes additional spending to address the affordable housing needs of American renters and homeowners.  Among the various renter-specific provisions included in the DASH Act are a number of proposals to enhance assistance to low-income renters through an authorization of special Housing Choice Vouchers. Mandatory funding would be provided as needed to finance a total of 650,000 special vouchers – 250,000 incremental vouchers would be funded in the first year, and 400,000 in the following. These vouchers would target households with incomes at or below 50% AMI who are currently or at risk of being homeless. The DASH Act would establish a voucher payment standard of up to 125% of applicable FMR, slightly higher than regular Housing Choice Vouchers.

In an acknowledgement of the additional cost to administer these new vouchers, increased administrative funds provided to both public housing agencies (PHAs) and the U.S. Department of Housing and Urban Development (HUD). The bill would provide $300 million annually for five years for increased PHA administrative fee funding to hire service coordinators providing or referring voucher recipients to relevant services. Another $500 million would be provided over two fiscal years to build the capacity of PHAs to accomplish goals under DASH. HUD would receive $15 million a year for five years to administer the newly created special vouchers.

The criteria for state accountability of administering these special vouchers is set forth as follows:

The purpose of the HTF, which is funded by annual contributions from Fannie Mae and Freddie Mac, is to finance affordable housing for ELI and very low-income households. This year, HUD announced an allocation of nearly $700 million through HTF. Still, additional funds are needed to address the affordable housing crisis , especially for ELI households. The DASH Act would provide $10 billion in HTF funding annually for 10 years. The first $10 billion annual allocation to states would be provided as per the existing HTF formula. For the second-year allocation, the HUD Secretary would be required to propose a new HTF formula that considers the effects of COVID-19, among other additional factors, while maintaining a focus on extremely low-income renters. These funds could be used for land acquisition and the acquisition, rehabilitation or development of rental housing that prioritizes housing for people experiencing homelessness. Again, a significant increase in funding requires ensuring agencies are able to handle the additional administrative work that will follow. As such, the DASH Act would provide an additional $65 million annually for five years for administrative and capacity building funding for states to administer this supplemental HTF funding. It’s worth noting the DASH Act proposed $5 billion more over the first five years for the HTF than what was requested in both Waters’ Housing is Infrastructure bill and the FY 2022 budget request, which both asked for $45 billion.

Nevertheless, the DASH Act presents a comprehensive set of proposals to address a wide variety of the nation’s affordable housing challenges and Wyden should be commended for the DASH Act’s introduction.