Senate Finance Committee Chairperson Sen. Ron Wyden, D-Oregon, announced August 18 the Decent, Affordable, Safe Housing for All (DASH) Act, which will be formally introduced in September when the Senate returns from recess. In addition to the bill text, a bill summary and detailed section-by-section summary were released in conjunction with the announcement. The country’s affordable housing and homelessness crises, particularly as they pertain to children, call for a comprehensive, multipronged approach and Wyden has long envisioned the DASH Act being a valuable tool. Novogradac estimates nearly 1.1 million additional affordable rental homes can be financed through enactment of the primary low-income housing tax credit (LIHTC) financing provisions of the DASH Act.

Wyden has been developing the DASH Act for several years. Prior to ascending to chairperson of the Senate Finance Committee, Wyden spoke repeatedly about his desire to introduce the bill if and when he became chair. With Democrats holding the majority in the Senate Wyden has now made good on his promise to introduce the bill he feels will be instrumental in ensuring no child is homeless.

Many of the provisions of the DASH Act will be familiar to affordable housing advocates as the bill draws on other significant legislation such as H.R.2 (116th Congress), the Moving Forward Act, the $1.5 trillion infrastructure bill passed the House July 2020, S. 4078 (116th), the Emergency Affordable Housing Act of 2020, which essentially served as a Senate companion to the H.R. 2 LIHTC provisions, and the Affordable Housing Credit Improvement Act (AHCIA, H.R. 2573, S. 1136). The AHCIA has been introduced in four consecutive sessions of Congress and the DASH Act draws heavily from the 2021 iteration..

The DASH Act includes a variety of affordable housing proposals that will be covered in a series of Notes from Novogradac posts. This post will focus on the LIHTC provisions of the bill. Subsequent posts will address proposals to enact a middle-income housing tax credit (MIHTC), the Neighborhood Homes Investment Act (NHIA, H.R. 2143, S. 98)/first-time homebuyer tax credit, and a renter tax credit (which is identical to S. 2554, the Renters Tax Credit Act of 2021, introduced July 29 by Wyden and Sen. Sherrod Brown, D-Ohio, and would assist extremely low-income renters) with other housing spending proposals.

Like AHCIA, the DASH Act Would Greatly Expand the LIHTC

The LIHTC is by far the largest source of capital for financing the production and preservation of affordable rental homes and, as such, improvements to the incentive will significantly increase the number of households that can be assisted. The DASH Act includes more than a dozen proposals to enhance the incentive’s reach. A number of provisions were analyzed to determine the additional affordable rental homes that could be financed through enactment:

In addition to these major unit-financing provisions, which are covered in more detail below, the DASH Act would also:

Novogradac analyzed the impact of enacting the primary unit-financing LIHTC provisions of the DASH Act and found that an estimated 1,099,000 additional affordable rental homes could be financed over 10 years if the bill were enacted. Based on research conducted by the National Association of Home Builders, Novogradac estimates those nearly 1.1 million homes could house more than 2,560,000 million low-income people. Through the financing of these additional affordable homes, the DASH Act would go a long way in assisting the millions of low-income households who are cost burdened, cannot find affordable housing, or are experiencing homelessness.

The estimates presented in this discussion are part of Novogradac’s ongoing analysis of rental housing provisions included in proposed legislation to enhance and expand the LIHTC and PAB rental home financing. For each estimate detailed below, several steps were taken to arrive at the additional affordable rental homes projected to be financed. In the case of each set of estimates, certain provisions provide the foundation upon which additional analysis is based. For 9% estimates, the analysis assumes the temporary 12.5% allocation increase expiring at the end of 2021 is made permanent, which is a provision of the DASH Act. Additionally, all of the estimates assume that gap financing is scalable with the increased availability of LIHTC equity and PAB debt. The scalability of gap financing applies more so to 4% LIHTC properties than to the 9% discussions that follow, because the 4% LIHTC is a shallower subsidy than the 9% LIHTC.

The DASH Act proposes temporarily reducing the PAB “50% test” to 25%. The 50% test refers to the requirement for PABs to finance at least 50% of aggregate basis of affordable housing properties to qualify for the maximum amount of 4% LIHTCs. Novogradac estimates lowering the threshold from 50% to 25% could generate an additional 454,500 affordable rental homes financed by 2021-2024 multifamily PAB issuances over a decade.

Novogradac estimates that nearly 223,000 additional affordable rental homes could be financed over 2022-31 by enacting the DASH Act’s 30% basis boost provisions that primarily affect the 4% LIHTC. As with the AHCIA, the additional basis boost provisions included in the DASH Act would expand upon existing boosts already allowed under current law. Basis boosts allow a LIHTC property to generate more equity, thus increasing a property’s maximum LIHTC allocation. This increase in equity makes new construction or rehabilitation of an existing property more financially feasible. The proposed basis boosts would be effective for buildings placed in service after Dec. 31, 2021.

The three primary boost provisions are:

Novogradac estimates that increasing the 9% allocation annually by 25% plus inflation in both 2021 and 2022 could finance 298,500 additional affordable rental homes over 2022-31. This estimate excludes units in 9% LIHTC properties receiving the 50% ELI basis boost described below. The DASH Act would increase the annual 9% LIHTC allocation from $2.81 per-capita with $3,245,625 small state minimum under current law, to: 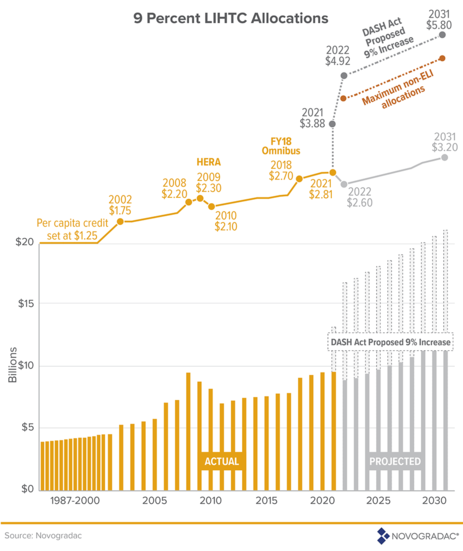 Novogradac estimates the DASH Act’s 50% ELI basis boost proposal could finance an additional 124,000 affordable rental homes in 4% and 9% LIHTC properties over 2022-2031. This estimate includes ELI units in 9% properties not accounted for under the 9% allocation increase estimate above. The DASH Act states that not more than 90% of 9% LIHTC allocations can be for buildings that reserve less than 20% of their units underwritten for ELI households. ELI households are those earning at or below the greater of 30% of the area median income or the federal poverty line. To qualify for the proposed 50% basis boost, at least 20% of the units in the property would have to be underwritten and set aside for ELI households and the increased boost is available only for those units set aside for ELI households. Both 4% and 9% developments could qualify for this basis boost, but it will be more much more difficult for 4% LIHTC properties to meet the requirement to set-aside at 20% of their units for ELI households given the much shallower subsidy. It should be noted the ELI boost would not increase the amount of 9% LIHTC allocations available in the state, but rather would allow states to provide more 9% allocation from their fixed state ceiling in any one particular property than is possible under current law. States would need to consider competing priorities to address affordable rental housing needs across the state before making allocations to ELI buildings.

Given the deep subsidies required to make rental homes affordable to ELI households, additional tools, such as the targeted 50% basis boost proposed, are needed to make properties financially feasible. The purpose of the 50% ELI basis boost is to reduce hard debt as much as possible to offset for the reduction in income generated by the lower rents charged to the ELI rental homes. Novogradac estimated the number of rental homes that could be financed with the increased equity and lower debt service. In the case of 4% LIHTC properties, the ELI basis boost would likely be used in properties financed under the Rental Assistance Demonstration program, with its focus on preserving public housing properties by leveraging private investment, or other properties located in communities with high area median incomes.

Below are the states that Novogradac projects could gain the largest number of affordable rental homes: 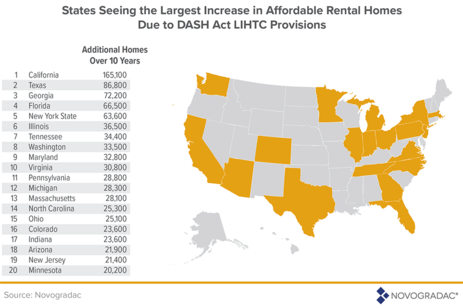 Now that the bipartisan infrastructure bill and fiscal year (FY) 2022 budget resolution with reconciliation instructions have passed Congress on Aug. 24, Democrats are one step closer to advancing their housing priorities, and the DASH Act represents Sen. Wyden’s top priorities. An August Notes from Novogradac post detailed the two-track approach the Congress is taking – a bipartisan infrastructure framework that will address “hard” infrastructure improvements such as roads, bridges and highways, and a reconciliation bill that will include “human” infrastructure projects, including community development tax incentives and funding. The forthcoming $3.5 trillion reconciliation bill, the framework for which was provided by Democrats FY 2022 budget resolution, will include provisions to address the country’s affordable housing crisis and is expected to draw from the DASH Act and other legislation introduced in the current Congress. Reconciliation will provide the likely vehicle to carry DASH Act provisions. Because of the Byrd rule – which limits provisions included in reconciliation legislation to those that have a budget impact, among other requirements – not all of housing proposals discussed above will be able to be included in the reconciliation bill, but housing advocates can push for the inclusion of LIHTC and PAB provisions excluded from the reconciliation bill in year-end tax legislation.

Once introduced, the DASH Act, as well as the other housing legislation discussed, will provide the tools needed to address the country’s affordable housing crisis. With the current administration’s focus on addressing the multitude of challenges facing millions of Americans, the time is now for significant housing legislation.