Demand for 13th Round NMTC Authority Exceeds Supply by 5:1

Despite the uncertainty the new markets tax credit (NMTC) faced prior to the five-year program extension passed and signed in late 2015, demand for the NMTC remains strong and exceeds supply, as evidenced by today’s announcement from the CDFI Fund that it received 238 applications for the 2015 allocation round.

The 2015 notice of allocation authority made up to $3.5 billion in tax credit allocation authority available for the 2015 round. Applications for the 13th round were due Dec. 16 and the Community Development Financial Institutions (CDFI) Fund is expected to announce awardees in the summer of 2016.

Here’s a look at how this round’s demand compares to the historical NMTC applications and allocations: 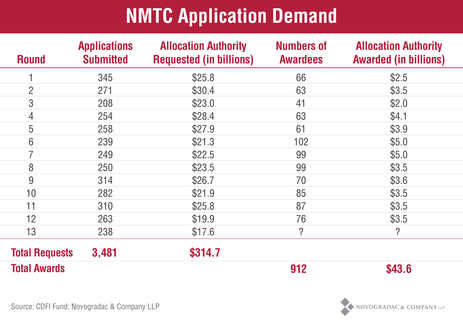 The number of applications is the lowest since the third round of the NMTC program, when there were 208 applications submitted. The total requested allocation from the most recent applicants is the lowest, by more than $2 billion, in the 15 year history of the program. Nevertheless, demand for the 13th round exceeds supply by more than 5 to 1.