Despite Advancements in Clean Energy Capacity in 2021, U.S. Currently Not on Track to Meet Biden’s Clean Energy Goals

The United States’ renewable energy generation in 2021 was notable. In fact, 2021 was solar energy’s best year and wind energy’s third best year in terms of renewable energy generation, according to BloombergNEF’s recently released Sustainable Energy in America 2022 Factbook. That said, despite these accomplishments, the United States is not on track to meet the Biden administration’s clean energy goals and more federal investment is needed to reach these goals.

The factbook details the use of clean energy in the United States in 2021 and comparing it to the use of nonrenewable energy sources. The factbook also provides a comparison of total use of clean energy in 2021 to previous years. Energy consumption in the United States grew 4.4% in 2021 from 2020 due to the recovery from the COVID-19 pandemic, but total consumption was still lower than 2019 levels. Carbon dioxide (CO2) emissions were 4.4% lower in 2021 compared to 2019, showing that recovery from the pandemic did not result in emissions greater than from before the onset of the pandemic. However, renewable energy generated only one-fifth of U.S. power.

Highlights from the Factbook

The factbook provided some major highlights from 2021. In 2021, 24.2 gigawatts of new solar energy capacity and 13 gigawatts of wind energy came online. Further, 4.1 gigawatts of new battery storage capacity, approximately a 62% increase, also was added in 2021.

In 2021, about one-fifth of the energy generation in the United States came from renewable sources. In 2021, 37 gigawatts of wind and solar energy capacity came online and $105 billion in new capital was invested into new clean energy assets in the United States. The graph below shows the generation percentages of different electricity sources from 2011 to 2021. While renewable sources are still on the lower end of the spectrum, clean energy sources have increased by 61% from 13% of overall generation to 21% since 2011. 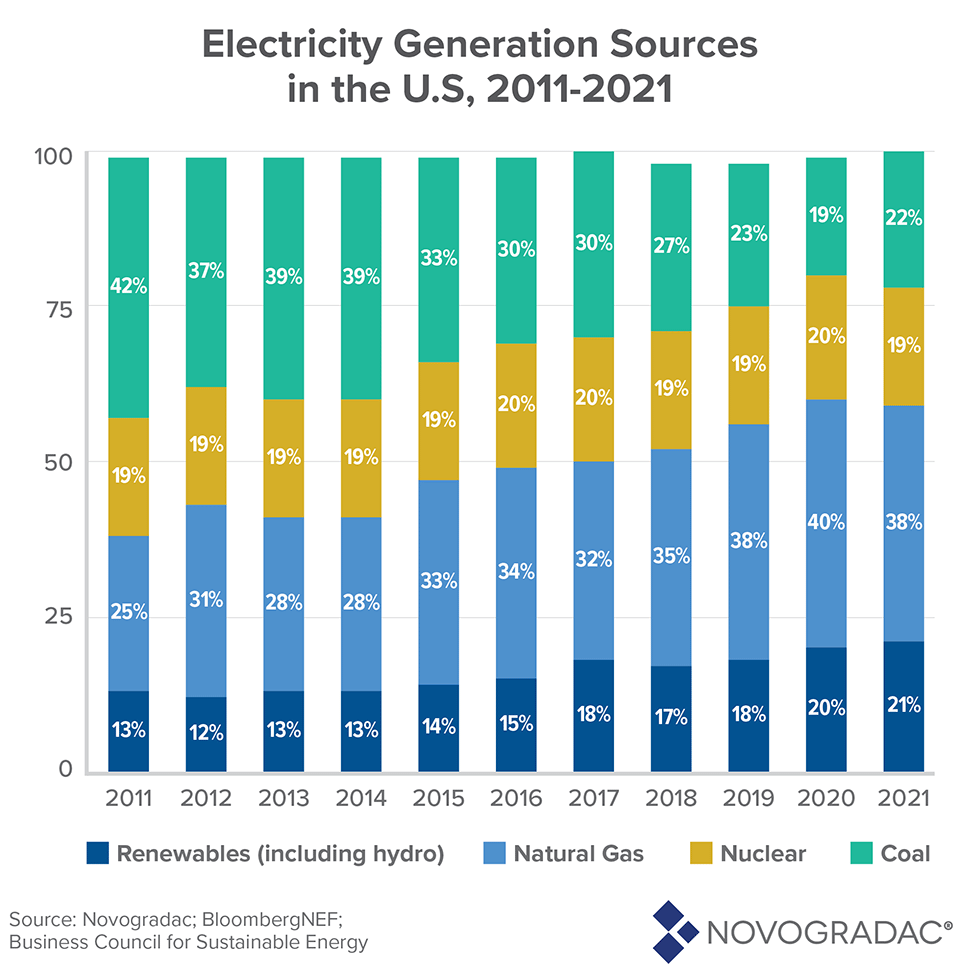 Clean energy storage projects are needed to provide electricity when energy cannot be actively produced. In 2021, 4.1 gigawatts of battery storage came online. Hydropower projects provide 81% of energy storage, but battery storage has been increasing more rapidly in the last decade and provides more opportunities to expand the use of clean energy. The chart below illustrates solar plus storage projects—or combined solar and storage projects—that were announced in different states in 2021; these investments are a testament to the increasing popularity of solar plus storage. 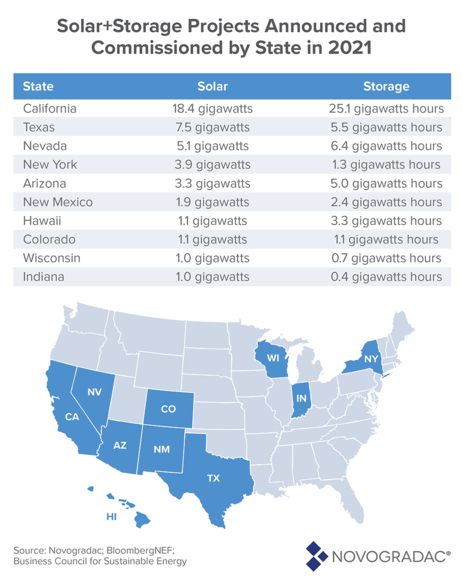 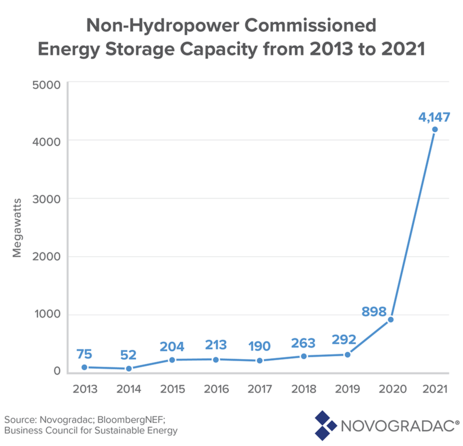 Without expanded federal investment into clean energy, the current pace of clean energy installation will not be enough to meet the Biden administration’s goals. His administration’s main goal is for the United States to produce electricity from 100% clean energy sources by 2035. The administration’s other main goal is to reduce carbon emissions by half of 2005 levels by 2030. He also set a goal of having 30 gigawatts offshore wind capacity by 2030. Solar installation could increase by 66% over the next 10 years with a long-term expansion of the renewable energy  investment tax credit (ITC) paired with investment in U.S. manufacturing. If the ITC were to be expanded, residential solar installation could increase by 20%, non-residential by 15%, and utility-scale solar by 86%. Total new solar capacity could be greater than 70 gigawatts with an expansion of the ITC. However, if Congress does not expand the ITC, U.S. solar capacity would only reach 39% of Biden’s 2035 goal of powering the electric grid with 100% clean energy. Further, the United States is also not on track to meet the Biden administration’s offshore wind capacity goal, as about 2,000 offshore wind turbines need to be installed by 2030 to reach his goal, but the United States only has seven offshore wind projects. Congress needs to extend and expand the production tax credit (PTC), which is mostly used for wind projects, to help the country achieve the Biden administration’s offshore wind goals.

The renewable energy spending provisions included in the Infrastructure Investment and Jobs Act (H.R. 3684) are helpful, but more investment is needed. It allocates $80 billion for clean energy technologies which will promote decarbonization over the next decade. While this investment will help to further promote the use of clean energy, more is needed, such as the clean energy provisions in the Build Back Better Act (BBBA) to better ensure the Biden administration’s goals are met. The BBBA is currently stalled in the Senate due to lack of support from Sen. Joe Manchin, D-West Virginia, but he has recently signaled support for BBBA’s clean energy provisions in a new reconciliation bill. One of these clean energy provisions is allowing stand-alone storage projects to claim the ITC, as of now, they can only claim the ITC if paired with a solar project. Allowing the ITC to be used for stand-alone storage projects will promote more private investment into storage, an important tool for ensuring solar and wind energy facilities can provide power even when the sun isn’t shining or wind blowing.

The PTC expired at the end of last year and the 26% ITC, which is mostly used for solar projects, will be phased down. The ITC has already expired for certain Internal Revenue Code section 45 renewable energy technologies, including biomass. Without extension and expansion of these credits, the costs of investing in clean energy will increase. Developers worked to complete wind projects in 2021 to take advantage of the PTC before the planned phase down began. Sunsetting these tax credits will make investing in wind and solar energy developments more expensive, likely resulting in fewer investments into these projects and making it more difficult to reach the Biden administration’s clean energy goals.

To hear more about renewable energy and investments into the sector, be sure to attend the Novogradac 2022 Spring Renewable Energy and Environmental Tax Credits Conference from May 19-20.