The low-income housing tax credit (LIHTC) is the primary tool by which affordable, rental housing is financed in the United States. Still, even after financing the construction and preservation of more than 3.6 million affordable rental homes since its inception (according to the National Council of State Housing Agencies), some have criticized it on fair housing grounds. Long-standing misconceptions include that it concentrates affordable rental housing in high-poverty areas and racially segregates tenants. Further, fair housing advocates have questioned the incentive’s ability to locate affordable rental housing in more racially and economically diverse communities near opportunities such as employment, good schools and other needed services.

New analysis from Novogradac shows that the LIHTC is not contributing to the segregation of low-income households and there is more diversity in siting, particularly among newly constructed properties. While regulatory barriers to building new affordable rental housing exist in many low-poverty communities, especially in those with few people of color, such barriers apply regardless of whether the building is financed by LIHTCs.

Many fair housing critiques make the mistake of treating the rental homes rehabilitated with LIHTC equity the same as newly constructed homes. When analyzing the location of all LIHTC-financed properties, one could reach the mistaken conclusion that properties are more likely to be located in higher poverty communities and communities of color. To truly understand the good being done by LIHTCs, one must first understand the different ways it is used.

In addition to financing the development of newly constructed affordable rental homes, the LIHTC is often used as a preservation tool, especially regarding properties financed by private activity bonds (PABs) and 4% LIHTCs. As has been noted in this space in the past, there is a significant policy difference in the siting of new construction LIHTC properties as compared to rehabilitation. When employed as a preservation tool, the LIHTC recapitalizes existing affordable housing, some of which are located in lower-income and/or racially segregated neighborhoods as a result of siting decisions made long before, sometimes decades prior. In these cases, the LIHTC does not further concentrate poverty or racially segregate, but instead improves the lives of those already living there and maintains existing federal investments.

To get a more accurate picture of whether the LIHTC is exacerbating racial segregation and poverty concentration, the location of new construction LIHTC properties needs to be examined separately. The analysis undertaken by Novogradac helps to dispel a common misconception that LIHTC properties are disproportionately located in high poverty and/or racially segregated census tracts where opportunities may be limited. Though previous Notes from Novogradac posts have provided rebuttals to these claims and many other misconceptions about the incentive, the analysis presented here provides hard numbers.

Novogradac analyzed properties to determine how many are in difficult development areas, low-poverty census tracts (defined as census tracts with a poverty rate of less than 10%), qualified census tracts, and majority-Black, Indigenous and people of color (BIPOC) census tracts. The area median income (AMI) in the BIPOC tracts was also analyzed to show the percentage of properties located in low- and moderate-income communities. For comparison purposes, these analyses were also done for market-rate, multifamily housing properties with five or more apartments. 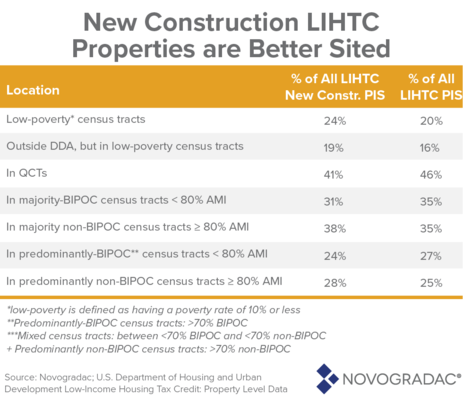 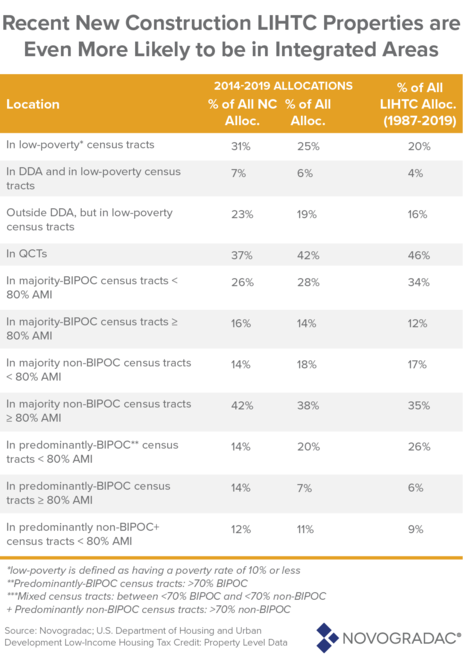 Next Steps–Resources Should Enhance the LIHTCs

Though it is the greatest source of financing for affordable rental housing, the LIHTC incentive cannot be expected to address all the factors that hinder expansion of the affordable rental housing supply, especially in higher income communities. One such constraint is the local zoning and land use regulations that make it difficult to construct any rental housing, much less affordable housing, in areas of opportunities. The LIHTC cannot counteract local zoning and land use restrictions on its own, and in general, such restrictions are largely in the jurisdiction of state and local governments. For its part, Congress can take steps to address exclusionary zoning practices, such as considering the Unlocking Possibilities Program, which was included in the last iteration of the Build Back Better reconciliation bill. The program would incentivize the adoption of zoning reforms, allocating $4.5 billion to HUD to address the chronic shortage of buildable land for affordable housing and encourage state and local governments to change their zoning and land use policies to facilitate affordable housing. Underlining the importance of addressing barriers to the development of affordable housing, the White House hosted an event in October 2021 on Reducing Land Use and Zoning Restrictions. This event was part of a series of action-oriented convenings on how federal agencies can work together to boost affordable housing supply.

Other factors that influence where LIHTC-financed housing is located include, but are not limited to: qualified allocation plan (QAP) criteria; availability of and cost of land; and availability of other affordable housing subsidies. In regards to QAPs, research from the NYU Furman Center found that QAPs could be an effective tool when looking to site LIHTC properties in higher opportunity neighborhoods. The findings provided in this post illustrate how states’ decision-making, in the form of QAP criteria, are leading to LIHTC properties being located in more diverse–both economically and racially–census tracts. When developers are able to influence the location of LIHTC-financed properties, as in the case of new construction, the data shows that this housing is less likely to be located in lower-income, less racially diverse areas.

Future decisions about how to enhance the LIHTC incentive should consider what can be done to further support allocating agencies with the development siting decisions. For instance, when the Biden administration proposed a special set-aside for LIHTCs in “high opportunity” areas, as detailed in the General Explanations of the Administration’s Fiscal Year (FY) 2022 Revenue Proposals, also known as the Greenbook, it appeared to be conceived around the notion that LIHTC properties would not be sited in such areas unless there was a federal policy directive. As this analysis has shown, a significant portion of LIHTC properties are indeed located in both racially and economically integrated areas, and trend in recent years has been toward greater diversity. It should be noted the recently released FY 2023 Greenbook proposed allowing allocating agencies to provide a 30% basis boost to PAB-financed LIHTC properties; this proposal, unlike the LIHTC proposal included in the FY 2022 Greenbook did not include development siting requirements. While the FY 2022 proposal was a strong endorsement of the LIHTC from the Biden administration, future proposals to further enhance the LIHTC should consider this analysis and devise proposals that build upon the good work already being done by developers and state allocating agencies.

Help Rewriting QAPs Provides Opportunity for Clarity, Simplification
Rising Stars: Novogradac Spotlights Younger Leaders in Community Development
ESG Investing: Where it is Now; Where it’s Headed; What to Do
END_OF_DOCUMENT_TOKEN_TO_BE_REPLACED