It’s no surprise to anyone who’s purchased a used car or whose favorite baseball team signed an aging free agent: Expenses are higher for older models.

That truism was borne out in Novogradac & Company LLP’s 2017 Multifamily Rental Housing Operating Expense Report–Survey and Analysis of LIHTC Properties, which confirmed that operating expenses are higher for low-income housing tax credit (LIHTC) properties that are acquired and rehabilitated than they are for new-construction properties.

And the gap is expanding.

That information comes from the annual report that examined operating expenses for 1,400 properties across the nation, covering 170,000 individual apartments. The report provides information based on property type, building size, geographic area, regional population density and other factors. 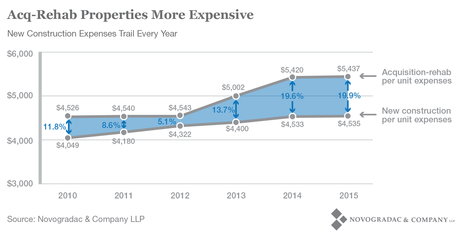 That the gap between acq-rehab expenses and new-construction expenses has nearly reached 20 percent can be a significant factor in planning and decision-making for operators of LIHTC properties.

That there is difference won’t shock to anyone in the affordable housing field, although the magnitude may be greater than suspected. But like other information available in the 2017 Multifamily Rental Housing Operating Expense Report, it’s useful and can help inform decisions.

In affordable housing, like with a vehicle, the pre-owned model is often broken in, reliable and cheaper than the new one. But in both cases, the wise owner is prepared for greater expenses down the road.