The Office of the Chief Counsel of the Internal Revenue Service (IRS) recently issued a memorandum dated March 26, 2015, recommending withdrawal of a SBSE memorandum dated August 20, 2007 regarding noncompliance resulting from conflicting program requirements. The 2007 memorandum stipulated that if a taxpayer has implemented policies and/or procedures that are in conflict with the requirements of Internal Revenue Code (IRC) § 42, such as not renewing a tenant’s lease in an IRC § 42 low-income unit when the tenant’s income rises to a certain income threshold that violates local, state or other federal program (despite the fact that the initial occupancy satisfied the income limitation elected for the project under IRC § 42(g)(1)), then the property is not in compliance at all during the 15-year compliance period and no credit is allowable under IRC § 42.

In contrast, the recently issued 2015 memorandum states that not renewing a tenant’s lease when a tenant’s income rises to a certain income threshold that violates local, state or other federal program (despite the fact that the initial occupancy satisfied the income limitation elected for the property under IRC § 42(g)(1),) does not mean that the building is not a qualified low-income building under IRC § 42.

However, unless good cause exists to not renew the lease, an owner is required to continue the tenancy of a tenant in a low-income unit who upon initial occupancy satisfied the applicable income limitation elected under IRC § 42(g)(1). Good cause should be determined under the applicable state or local law, and the fact that a local, state or other federal program’s income requirements conflict with IRC § 42(g)(2)(D)(i) or (ii) may be relevant for this determination, however, an increase in income, by itself, is not good cause to end the leasing of the unit to such tenant. IRS agents do not need to determine whether good cause existed when an owner fails to renew the lease of any tenant. Rather, an appropriate party (e.g., the tenant or housing credit agency) can enforce the extended use agreement to the extent there is a question of whether there was good cause for non-renewal of a lease.

This 2015 memorandum is particularly important when a LIHTC property is subject to rules under other programs. For example, some funding programs or property tax abatement programs offered by federal, state or local jurisdictions have requirements concerning tenant incomes in participating low-income housing properties. These programs sometimes do not allow tenants who were initially qualified but whose income has subsequently increased above certain income thresholds to remain qualified.

These programs generally have income limits that are equal to, or slightly greater than, the 60 percent area median gross income (AMGI) limits under IRC § 42. However, the percentage of households exceeding the 60 percent AMGI limit is relatively low. In the Department of Housing and Urban Development’s (HUD) recent report, “Understanding Whom the LIHTC Program Serves: Tenants in LIHTC Units as of December 31, 2012”, HUD indicated that fewer than 10 percent of reported households have annual incomes above 60 percent AMGI limits. 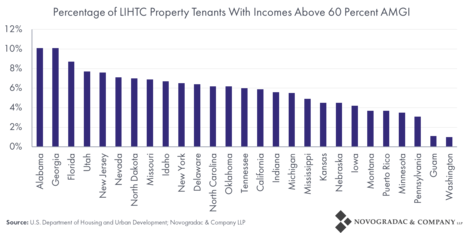