The 2018-2020 GSE housing goals, which are required by the Financial Safety and Soundness Act of 1992 and described in further detail here, cover certain benchmarks concerning both single-family housing and multifamily housing. The table below illustrates the multifamily goals in relation to the support of the affordable multifamily housing lending, as well as the progress the GSEs have made so far.

Part of the Housing and Economic Recovery Act of 2008 (HERA) requires the GSEs to allocate funds for affordable housing and economic development into the HTF and the CMF. Each GSE must set aside in each fiscal year an amount equal to 4.2 basis points (0.042 percent) for each dollar of the unpaid principal balance of its total new business purchases. The GSEs then must transfer 65 percent of this amount to the HTF and 35 percent to the CMF. The objective of the HTF is for the U.S. Department of Housing and Urban Development (HUD) to assist states in meeting the housing needs of the lowest income families, and does so by providing grants by formula based on need for the creation, preservation, and rehabilitation of housing for extremely low- and very low-income families. HUD further restricts these funds for use only to benefit the extremely-low income families, as long as the overall annual HTF amount is under $1 billion, which it has historically been and is projected to continue being in the foreseeable future. The CMF is a special account within the Treasury Department’s Community Development Financial Institutions (CDFI) Fund that competitively awards grants to qualified nonprofits with the goal of attracting private capital to economically distressed communities for affordable housing and associated economic development.

Fannie Mae’s total new business purchases in 2018 amounted to $512 billion, so the total amount of affordable housing allocation payments by April 2019 was $215 million. Freddie Mac’s total new business purchases in 2018 totaled $385.2 billion, for an affordable housing allocation payment of $161.7 million in April 2019. Together, the GSEs awarded $376.7 million to be used for affordable housing. HUD received a total of $247.7 million in HTF funding from amounts set aside in 2018 to states by formula earlier this year, which is similar to Novogradac’s earlier estimates. $247.7 million is a slight decrease from last year’s total HTF awards of $266.8 million. The graphic below illustrates the breakdown of 2019 HTF allocations by state. The CDFI Fund received a record high of more than $142 million for the CMF from amount set-aside by the GSEs in 2018 to be awarded this year, which is higher than last year’s amount of approximately $120 million.

The Duty to Serve rule was also mandated by HERA and requires that the GSEs serve very low-, low-, and moderate-income families in three underserved markets: manufactured housing; affordable housing preservation; and rural housing. The rule creates an evaluation process that occurs in three-year cycles, and its objective is to increase the liquidity of mortgages in underserved markets. It is the responsibility of FHFA to evaluate the GSEs’ performance by first performing a quantitative assessment of whether the GSEs achieved its benchmarks, then by performing a qualitative assessment of the impact the GSEs had in underserved markets, and finally, performing as assessment of extra credit-eligible activities undertaken by the GSEs. Extra credit activities include creating economically diverse neighborhoods, through means such as promoting affordable housing in high opportunity areas. FHFA reported that neither GSE was successful in this regard. However, serving high-needs rural areas is also included as an extra credit activity, and was achieved by both GSEs. This achievement is discussed in further detail later in this post. The table below illustrates how well the GSEs performed in achieving their goals for underserved markets in 2018.

The GSEs have supported the affordable housing preservation market in a number of ways, such as purchasing loans on properties participating in HUD’s Rental Assistance Demonstration. Freddie Mac did exceptionally well by increasing its support for financing small multifamily buildings. Small multifamily buildings of 5-50 units are a crucial source of unsubsidized or filtered affordable housing but they often lack liquidity in the secondary market. In addition to this increase, Freddie Mac created three new programs – two of which provide liquidity for small multifamily loans made by small financial institutions, and the other a program that streamlines origination requirements for small multifamily preservation transactions.

Fannie Mae achieved its goals as well, partially through an enhancement of its renovation loan product. This enhancement entailed aligning the product more closely with the market standards established by the Federal Housing Administration’s rehabilitation loan program.

Rural areas have been particularly hard hit by the affordable housing crisis. Fortunately, both Fannie Mae and Freddie Mac demonstrated a serious commitment to low-income housing tax credit (LIHTC) equity investments in rural housing markets. At the end of 2017, FHFA approved the GSEs limited re-entry into the LIHTC equity market, with a cap of $500 million in investments per year for each GSE, of which $200 million requires prior FHFA approval. The GSEs reemergence in the LIHTC equity market means the greater availability of equity investment and better equity pricing in areas outside traditional Community Reinvestment Act (CRA) assessment areas to address the affordable rental housing needs of underserved markets.

Fannie Mae supported both rural areas and tribal land using LIHTC. They committed a total of $118 million in LIHTC equity in 2018 to rural areas. This equity was used to finance 42 properties, 13 of which were in especially needy rural areas, such as the Lower Mississippi Delta and part of Middle Appalachia. Middle Appalachia is defined as the “central” Appalachian subregion under the Appalachian Regional Commission’s subregional classification of Appalachia, and the Lower Mississippi Delta is defined as the Lower Mississippi Delta counties designated by Public Laws 100-460, 106-554, and 107-171. Fannie Mae’s contribution to tribal land included four LIHTC equity investments supporting housing for Native Americans on tribal land. Fannie Mae relied on both proprietary and multi-investor funds to make these investments.

In a similar vein, Freddie Mac contributed $73 million in LIHTC equity to rural areas, although none was committed to high-needs rural populations. The $73 million in LIHTC equity was used to support 17 properties, five of which were in high-needs rural regions. The Duty to Serve regulation defines high-needs rural regions as the following regions (provided they are in a rural area): Lower Mississippi Delta, Middle Appalachia, a colonia, or a county with persistent poverty. A colonia is defined as a rural community that is in close proximity to the U.S.-Mexico border that lacks access to basic services such as water, sewer, or housing.  High-needs rural populations are defined as the following populations (provided they are located in a rural area): members of a federally recognized Indian tribe located in an Indian area, or agricultural workers. Unlike Fannie Mae, Freddie Mac relied solely on proprietary funds to invest in LIHTC properties. See the table below that further breaks down where the funds from Fannie Mae and Freddie Mac were allotted in rural areas. 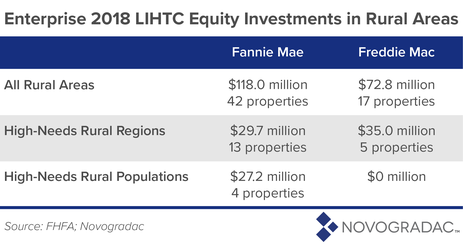 This update on the GSE’ performance from FHFA is promising news for affordable housing advocates. While the full performance of the GSE’s cannot be measured until 2020, this recent update released from the FHFA is encouraging and highlights the important role the GSEs play in supporting the affordable housing market. Modification and even the elimination of the GSEs has been discussed at length as housing reform proposals reconsider conservatorship and next steps. Any future plans should consider the value of the multifamily goals, the much needed funds they contribute to the HTF and CMF, and the importance of GSEs’ financing support in underserved markets, which speaks to the crucial role the GSEs play in addressing the affordable housing crisis the nation is currently facing.