In 2015, Federal Home Loan Banks (FHLBanks) awarded $210 million to 379 rental housing developments through the Affordable Housing Program (AHP), according to the Federal Housing Finance Agency’s (FHFA’s) 2015 Report to Congress. Those properties comprised 20,581 rental homes, of which more than 70 percent (14,709) were affordable to households with very-low incomes (at or below 50 percent of the area median income).

FHFA reports that approximately 68 percent of those AHP projects received additional funding from federal programs. The most frequent source of funding was low-income housing tax credits (LIHTCs), which supported almost two-thirds of all approved rental housing applications. The HOME Investment Partnerships Program and the Community Development Block Grant Program were among the other programs used in conjunction with AHP funds.

As illustrated in the chart below, 249 (or 66 percent) of approved AHP applications were for properties that also received LIHTCs. (The numbers displayed below add up to more than the total number of projects (507) because some projects receive federal funding from more than one source.) 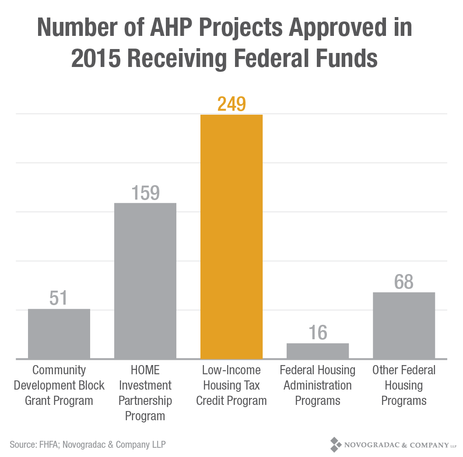