The Federal Housing Finance Agency (FHFA) announced Feb. 27 that it released $502.3 million for the 2020 allocations for the Housing Trust Fund (HTF) and Capital Magnet Funds (CMF). Of that amount, FHFA reported that $326.5 million will be transferred to U.S. Department of Housing and Urban Development (HUD) for the HTF, and $175.8 million will be transferred to the U.S. Treasury Department’s Community Development Financial Institutions (CDFI) Fund for the CMF. This compares to $247 million in 2019 HTF funding and nearly $132 million in 2019 CMF funding, some of which is used by the CDFI Fund for CMF administrative expenses.

This FHFA announcement followed the CDFI Fund’s Feb. 25 release of the nearly $131 million for the fiscal year (FY) 2019 round of CMF awards during its fifth funding round. The 38 awardees were selected from 113 applications, which requested more than $522 million in awards this CMF round and were based in 36 states, the District of Columbia and Puerto Rico.

The housing government sponsored entities (GSEs) Fannie Mae and Freddie Mac are required by the Housing and Economic Recovery Act (HERA) of 2008 to contribute to the CMF and the HTF. HTF allocations are required to be used for housing very low-income households, and HTF regulations reserve all of HTF funding for extremely low-income households when the overall annual amount available is $1 billion or less. CMF allocations are to support the preservation, rehabilitation, development or purchase of affordable housing for low-income communities and populations, as well as related economic development and community service facilities such as day care centers, workforce development centers and health care clinics. The GSEs’ contributions to the HTF and the CMF are based on 4.2 basis points of annual new business purchases. After FHFA authorizes the release of the allocations, the funds are transferred to HUD for HTF and the CDFI Fund for CMF. HUD distributes HTF funds according to the HTF formula to the 50 states, Washington, D.C. and U.S. territories. The CDFI Fund holds an annual national competition among nonprofit housing developers and CDFIs for the CMF funding.

Each year Novogradac estimates HTF and CMF funding, based on the GSEs’ most recent Securities and Exchange Commission (SEC) filings. Based on 2019 SEC filings from Fannie Mae and Freddie Mac, and as reported by FHFA, the amount for 2020 HTF and CMF allocations is $502.3 million. Historically, the U.S. Office of Management and Budget (OMB) has subjected this mandatory funding to sequestration, but also has returned previously sequestered funding. 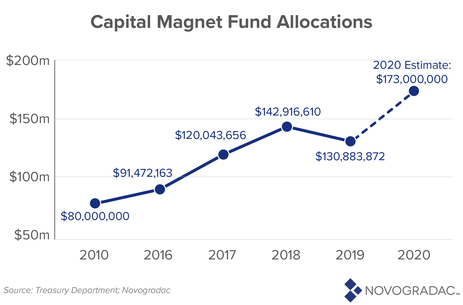 The 2019 Capital Magnet Fund Award Book provides a detailed look at the FY 2019 awardees. With this most recent award round, the CDFI Fund has given out nearly $557 million through five rounds of funding. As awardees are required to leverage their awards by a minimum ratio of 10 to 1, this represents at least $5.57 billion in private-public investment. However, the CDFI Fund reported that the 2016-18 CMF awards alone have leveraged more than $8.7 billion in private investment and more than $12 billion is total investment. That produced a ratio of more than 25 to 1.

Since 2010, CMF funds have been distributed to 102 awardees in 33 states plus the District of Columbia. More than a third of recipients have received more than one award. 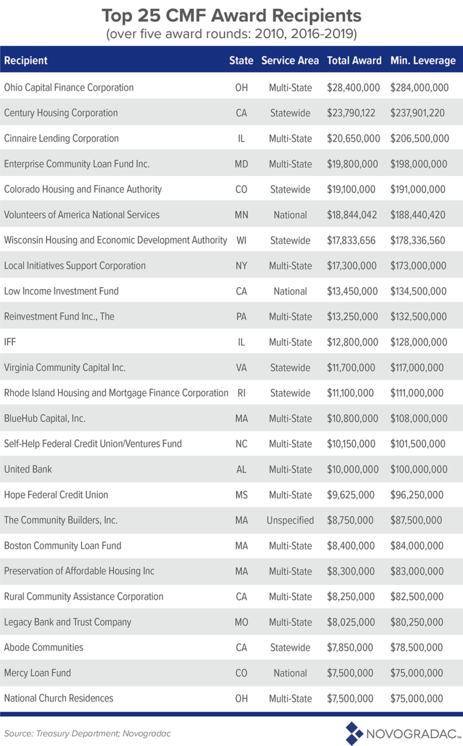 Of the 38 awardees for 2019, 12 are nonprofit housing organizations, 23 are CDFIs and three are housing finance agencies representing Colorado, Massachusetts and Wisconsin. The CDFI awardees include 18 loan funds, two banks or thrifts, two depository institution holding companies and one credit union.

The CDFI Fund estimates 2019 awardees will develop more than 22,400 affordable homes, including 20,700 rental and 1,700 owner-occupied homes. Low-income families will be the primary beneficiaries of this housing development; 98 percent of all homes developed will be for households earning 80 percent or less of the area median income.