The Federal Housing Finance Agency (FHFA) recently released the 2018-2020 Enterprise Housing Goals, which remain relatively unchanged from 2015-2017 levels. The FHFA, as required by the Federal Housing Enterprises Financial Safety and Soundness Act of 1992, sets the mortgage purchase goals for the housing government sponsored enterprises (GSEs), Fannie Mae and Freddie Mac. The only increase over the 2015-2017 levels is in the low-income multifamily goal, which was increased from the GSEs purchasing mortgages totaling 300,000 multifamily units affordable to families with incomes no greater than 80 percent of the area median income to 315,000 units. The table below provides the multifamily goals: 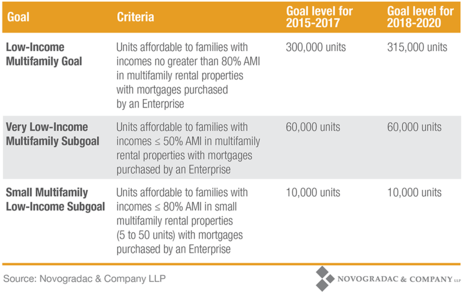 Meanwhile the GSEs and affordable housing assistance programs are coming under fire from different fronts. The Administration’s FY 2019 budget released Feb. 12 called for major reductions in affordable housing assistance. As it relates to the GSEs, the president’s FY 2019 budget asked Congress to increase guarantee fees charged by Fannie Mae and Freddie Mac by 0.1 percentage point, bringing the total fee to 0.2 percentage points, and extends the date of expiration of the fee to 2023, from 2021. The 2019 spending plan also calls for Fannie Mae and Freddie Mac to stop setting aside allocations to the Housing Trust Fund (HTF) and Capital Magnet Fund (CMF) used to help promote affordable housing. Novogradac analysis of the president’s budget highlighted other housing related cuts such as a 14 percent cut to FY 2019 funding for U.S. Department of Housing and Urban Development (HUD) programs, including elimination of the HOME Investment Partnerships program, Community Development Block Grant program and the Public Housing Capital Fund. While Congress is expected to reject many of these administration proposals, the budget makes clear the administrations intentions when it comes to affordable housing assistance.

On another front, a bipartisan effort to reform housing finance is taking place in the Senate. A discussion draft bill, supported by Senate Banking Committee members Bob Corker, R-Tenn., and Mark Warner D-Va., proposes to place Fannie Mae and Freddie Mac into receivership, repeal their charters and replace them with multiple mortgage guarantors. The draft bill also proposes to repeal the affordable housing goals, and in their place establish an incentive-based system intended to encourage lending to low-and middle-income borrowers. To raise funds, a “market access fee” would be charged on new loans, with the resulting proceeds going to the HTF, CMF, and a proposed Market Access Fund. According to analysis published by Bloomberg, this fee would create an estimated $5 billion a year, based on their assumption of $5 trillion in guarantees, to be used towards promoting affordable homeownership and rental housing.

Meanwhile, conservative think tanks have made public their ideas for how the administration could phase out the GSEs, without any action from Congress. This multi-year plan envisions implementation by a new FHFA Director appointed by President Trump. The current director, Mel Watt, was appointed by the Obama administration; his term expires in January 2019. Directives of the plan call for reducing the limits on home loans eligible for GSE backing, ending the purchase of loans for vacation homes, and no longer authorizing GSE purchase of cash-out refinances, among other measures.

Since coming under control of the federal government in 2008, the GSEs have been threatened with elimination or at least major revision. What would their elimination mean for affordable housing? The GSEs main purpose—to buy mortgage loans from home lenders, wrap them into securities and make guarantees to investors in case the mortgages default—would have to be taken up by the private sector under the discussion draft bill, though there is no guarantee lending would take place in underserved communities. The discussion draft would also eradicate up to $1 billion in LIHTC investment by the GSEs.  Late last year, the GSEs were authorized by FHFA to make LIHTC equity investments for the first time since being put into conservatorship.  They are allowed to invest up to $600 million without prior authorization, and an additional $400 million with authorization.  In addition to this funding, the GSEs entering the market could bring an added degree of stability, all of which would be lost. There is also the  GSE affordable housing allocations for the HTF and CMF to consider; both funds were on track to receive larger contributions in 2018 compared to 2017. Finally, many housing finance policy experts argue any reform plan should include an explicit government guarantee for catastrophic losses to enable a well-functioning secondary mortgage market. It remains to be seen if the discussion draft can gain bipartisan support before the 2018 mid-term elections.

Help Rewriting QAPs Provides Opportunity for Clarity, Simplification
Rising Stars: Novogradac Spotlights Younger Leaders in Community Development
ESG Investing: Where it is Now; Where it’s Headed; What to Do
END_OF_DOCUMENT_TOKEN_TO_BE_REPLACED