According to Novogradac & Company analysis, the final version of the Tax Cuts and Jobs Act, tax reform legislation approved by the House-Senate conference committee on Dec. 15 and likely to pass Congress this week would reduce the future supply of affordable rental housing by nearly 235,000 homes over 10 years.  The final bill is closer to the Senate bill and more favorable than the House bill, because it preserves the tax exemption for private activity bonds, but the final bill would still appreciably reduce affordable rental housing production at a time when the need for affordable rental housing is acute. Specifically, the following changes proposed by the bill would result in fewer rental homes built or renovated by the low-income housing tax credit (LIHTC):

This analysis is based on current market after-tax rates of return.  The calculations have not been adjusted for the adverse effects on investor demand for the LIHTC as a result of the new base erosion and anti-abuse tax and the increase in after tax rates of return from taxable investments.  Adjustments also have not been made for the effects of an anticipated increase in the volume of secondary market transactions, reentrance of Fannie Mae and Freddie Mac into the market, and the reduced size of the annual equity market.

The following analyzes the effect of the two changes and provides a rough estimate of the degree to which each change would reduce the number of affordable rental homes financed by the LIHTC over 10 years.

The reduction of the top corporate tax rate from 35 percent in 2017 to 21 percent in 2018 would reduce the tax loss benefits of LIHTC investments, since the value of depreciation expense deductions would be reduced. Novogradac & Company analysis found that lowering the corporate tax rate to 21 percent would reduce LIHTC equity by about 14 percent, translating to about $1.7 billion or more in lost equity annually. This loss of investor equity translates into the loss of 200,500 to 212,400 affordable rental homes, or more, over 10 years.

Much of this loss could be addressed through a two-step proposal to increase allocable LIHTCs and modernize the credit percentage formula.

The current draft of the Senate tax reform legislation would change the inflation adjustments throughout tax code from a factor based on the consumer price index for all urban consumers (CPI-U) to one based on a “chained” CPI-U. Many economists believe the chained CPI-U provides a more accurate estimate of changes in the cost of living from one month to the next by accounting for the effects of substitution on changes in the cost of living. This change will decrease inflation adjustments in LIHTC and private activity bond allocations in future years, and would lead to a loss of 18,700 to 19,900 affordable rental homes, or more, over 10 years.

Impact of Changes to Depreciation/Limitation on Interest Deductibility

The final bill provides for no reductions from current law in the depreciation cost recovery for real property subject to the interest deductibility limitations.  As a result, most LIHTC properties are likely to elect out of such limitations and be subject to the ADS cost recovery period of 30 years, as LIHTC partnerships could not qualify for the small business exception to the non-deductibility of interest. The Senate bill and the final bill also provide for temporary 100 percent asset expensing that phases down after 2022.  It is estimated that the combined effect of changes to the depreciation/interest deductibility of LIHTC properties will result in no net increase or reduction in affordable housing production.

On balance, it appears that the final version of tax reform legislation would reduce the total amount of LIHTC-financed affordable rental homes at a minimum by about 219,200 to 232,200, or more, over 10 years. Furthermore, given the lower financial feasibility under a lowered corporate rate, the changes would also likely result in rental homes that would likely serve higher average income levels, provide fewer amenities and/or social services.

That significant reduction in housing production would also mean the loss of more than 262,000 jobs and billions of dollars in business income and federal, state and local tax revenue across the United States. 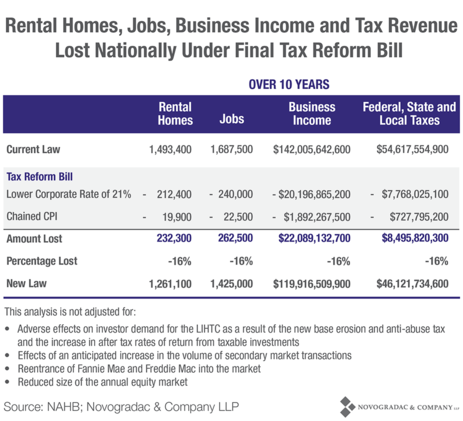