As the country deals with the COVID-19 pandemic, among the many pre-existing conditions that have been exacerbated by the current economic upheaval is the severe shortage of affordable rental housing. Earlier this year, Sens. Maria Cantwell, D-Wash., and Todd Young, R-Ind., planned to introduce a stand-alone bill to establish a minimum 4 percent floor for low-income housing tax credits (LIHTCs) generated by tax-exempt multifamily housing private activity bonds (PABs). This stand-alone bill was designed to solidify and elevate the already strong bipartisan support for the 4 percent floor, as it had nearly been included in 2019 year-end tax legislation. While those plans for a stand-alone bill have been put on hold, the ACTION Campaign has urged Congress to include a 4 percent minimum floor as one of its key LIHTC proposals for the next COVID-19 relief legislation. The provision was originally included in the Affordable Housing Credit Improvement Act (AHCIA) and supported by more than half the House and nearly 40 percent of the Senate. The 9 percent minimum rate was first enacted in the Housing and Economic Recovery Act of 2008 in response to the financial crisis and eventually made permanent by the Protecting Americans from Tax Hikes (PATH) Act in Dec. 2015. Given this precedent, Congress should provide parity by establishing a permanent 4 percent minimum rate.

Based on an updated baseline estimate of PAB-financed rental homes, Novogradac updated its estimate on the impact of a 4 percent minimum floor on affordable rental housing production and preservation. Novogradac estimates nearly 126,000 additional rental homes could be financed from 2020 to 2029, assuming that it is effective for buildings placed in service after Jan. 20, 2020. This represents a significant increase from previous 4 percent floor estimates.

As Congress has rightfully been focusing on addressing the immediate impact of the COVID-19 pandemic, the importance of a 4 percent minimum rate is particularly crucial in light of historically low rates; the April 2020 “4 percent” rate is 3.12 percent and will drop further to 3.08 percent in May. Unless Congress acts, such low rates will seriously inhibit the production and preservation of affordable rental housing. Anecdotal reports indicate that several LIHTC developments have stalled because of the lowered monthly rate and other effects of the pandemic public emergency.

While 2020 could be an off year for multifamily PAB issuance, and correspondingly rental home production and preservation starts because of COVID-19, the trends in PAB-financed development are expected to continue over the coming decade once the pandemic subsides as explained in a previous post.

The increase in the long-term rental home production estimate, assuming a 4 percent minimum rate, is due to the annual multifamily PAB issuance level of $15 billion plus, first seen during 2016-18, which now appears to be sustainable over the next 10 years.

If a minimum 4 percent LIHTC rate is enacted, LIHTC developments financed by PABs will have additional capital as a result of the minimum 4 percent LIHTC rate. The May “4 percent” rate, is 3.08 percent and has hovered around 3.2 percent over the past couple of years. If a permanent 4 percent minimum rate is enacted, additional equity will be generated even if states do not increase the volume of PAB cap allocated to residential rental housing bonds because of the additional LIHTCs resulting from the roughly 90+ basis point increase in the annual LIHTC rate.

The example pro forma below shows that 23 percent less equity is available without a 4 percent floor.  If one were established, it would make the potential development financially feasible. 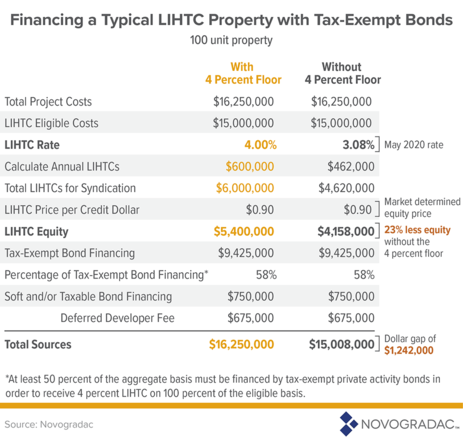 For this analysis, Novogradac assumed that states would increase multifamily bond issuance if they have PAB cap available in response to the additional equity and greater financial feasibility. Furthermore, this analysis assumed the absolute amount of soft subsidies going to tax-exempt bond properties would remain unchanged.

Finally, Novogradac assumed that the amount of eligible basis per unit is increasing by the projected inflation rate provided by the Congressional Budget Office (CBO) in order to reflect an increase in the cost of development.

This analysis does not incorporate the impact of the Affordable Housing Credit Improvement Act (AHCIA) provision to broaden bond recycling though recent articles on the need to address the PAB shortage many states are facing as well as the importance of prioritizing PABs for rental housing both touch on this issue. Furthermore, it does not incorporate the impact of the proposal to lower the 50 percent financed by test, as the ACTION Campaign has proposed for the next COVID-19 response legislation.

In addition to creating much-needed affordable rental housing itself, increased rental housing production would have significant economic impacts, as detailed below. 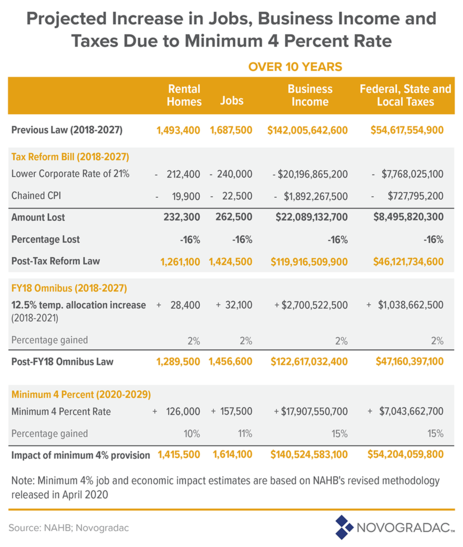 The states that would most benefit from the minimum 4 percent rate are highlighted below: 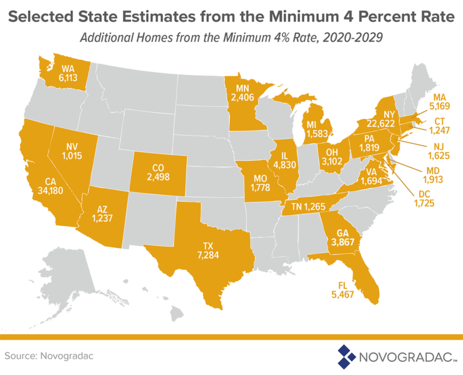 If Congress provides parity by establishing a permanent 4 percent minimum rate, this analysis suggests it could help address the severe shortage of affordable rental housing – both by supporting additional developments as well as reviving developments that have stalled in the pipeline – and as such would be a valuable tool in economic recovery efforts.