Four Things About the Historic Tax Credit That May Surprise You

In December, this blog discussed the 2012 National Park Service (NPS) report on the nationwide use of the historic preservation tax credit (HTC). The NPS has just released its 2013 edition, “Federal Tax Incentives for Rehabilitating Historic Buildings: Annual Report for Fiscal Year 2013,” and the data reveals the HTC continues to be an important economic development tool.

1. HTC Job Creation Continues to be Resilient and is Improving

The 2012 data indicated the HTC was a resilient job creator; job creation dipped in 2008-2009, it quickly reverted to an upwards trend despite a still weak economy. The 2013 numbers indicate that this continues to be the case. The number of jobs created by the HTC in 2012 was 57,783; in 2013, it grew to 62,923, an increase of 8.9 percent. This good news is somewhat tempered by the fact that that job creation has yet to return to its 10-year peak in 2009, when the HTC created 70,922 jobs. The outlook for HTC jobs growth is cautiously optimistic. 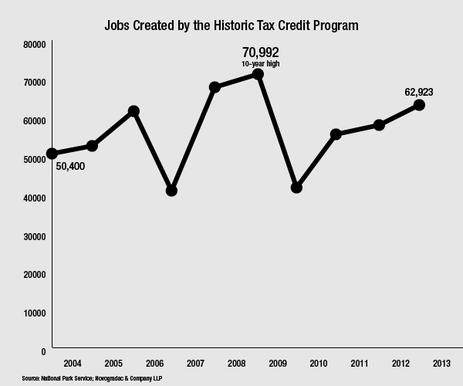 State tax credits have been critical to the growth of historic tax credit projects in prior years, and they continued to be key in 2013. While the percentage of HTC projects that were built using state credits declined slightly, from 43 percent in 2012 to 40 percent in 2013, they still represent a very significant portion of the market. Furthermore, the creation of new state historic tax credits in states such as Wisconsin suggests that this percentage may be due for an increase next year.

4. Number of Housing Units Constructed or Renovated Increases … By a Lot

This year’s data includes a remarkable jump in housing units renovated or constructed with the use of the HTC in 2013. After years of fairly steady growth, the number of units jumped by almost 40 percent in a single year. The 7,130 unit increase represents both the largest absolute and relative single year increase in housing units since the NPS began measuring this data in 2004. This suggests both that the housing market is heating up nationwide, and that developers have realized that the HTC is an excellent tool for developing housing units. 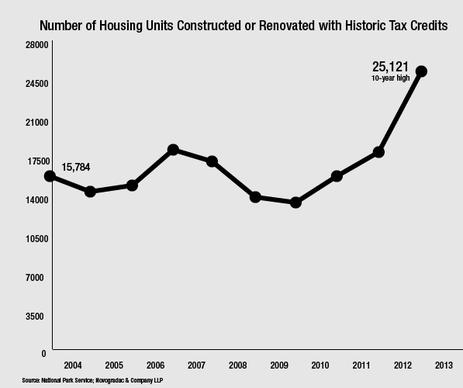 Historic Tax Credit Reviews in the Era of COVID-19
Expansion of Community Development Tax Credits Included in Infrastructure Bill
The Economics of State and Federal Historic Tax Credits: A Conversation with Donovan Rypkema of PlaceEconomics
END_OF_DOCUMENT_TOKEN_TO_BE_REPLACED