In February 2009, Congress created the Tax Credit Assistance Program (TCAP) and the Section 1602 programs to address lack of private investment in low-income housing tax credit (LIHTC) projects caused by the severe market disruptions that began in 2008. And in a report released last month, “Housing Programs Met Spending Milestones, But Asset Management Information Needs Evaluation,” the GAO examines the progress HFAs made in spending Recovery Act funds and to what extent these funds temporarily filled the gap left by diminished investor demand for LIHTCs.

To create the report, GAO obtained data on program expenditures for the TCAP and Section 1602 programs, respectively, from HUD and Treasury. In addition the GAO also developed a web-based survey for HFA managers in all 50 states, the District of Columbia and U.S. territories. In response to the survey, HFAs reported that project developers planned to use Section 1602 funds, TCAP funds, or a combination of these and other funding sources to develop 2,373 projects and 126,058 tax credit units.

Based on HFAs’ survey responses, the report includes a chart summarizing the range of average tax credit prices in 2005 through 2010. The GAO says HFAs reported state average tax credit prices in 2007 that ranged from a high of 97 cents to a low of 80 cents. By 2009, the range of average prices had dropped to a high of 82 cents and to a low of 50 cents. 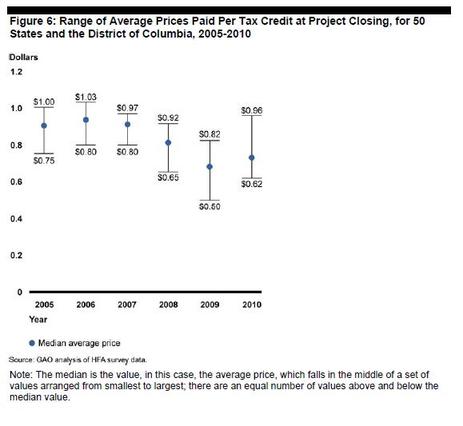 The report also says that almost all HFAs that received TCAP and/or Section 1602 funds reported that these funds temporarily filled the gap left by diminished investor demand for LIHTCs and allowed projects that had stalled because of a lack of investors to continue. The GAO asked HFAs to report on the number of projects that ultimately moved forward to close on financing with and without the use of Recovery Act funds for the years 2007, 2008, 2009 and 2010. GAO also collected data on the number of projects that did not move forward at all. As shown in graph below, HFAs reported collectively that 2009 saw the highest number of projects move forward with the use of TCAP Section 1602, or both types of assistance. In that year, 865 of 1,258 projects (69 percent) moved forward with Recovery Act assistance. 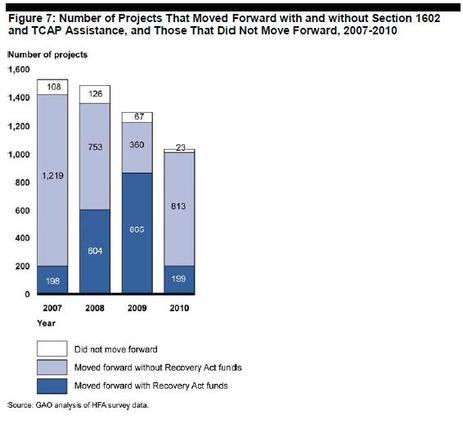 An appendix to the report shows some of the survey results; but some of the results are not shown, including responses about the impact of the Community Reinvestment Act on tax credit pricing. The report indicates these responses were intentionally not reported because they will be published in a forthcoming report. Novogradac & Company will announce the availability of that report as soon as it’s made public. To receive breaking news alerts about the tax credit industry, subscribe to Novogradac & Company’s free Industry Alert emails.