Fannie Mae’s and Freddie Mac’s recently-released Securities and Exchange Commission 10-K filings for 2016 show that both single family and multifamily volume has increased from 2015, which is good news for the Housing Trust Fund (HTF) and Capital Magnet Fund (CMF).

The Housing and Economic Recovery Act (HERA) of 2008 requires housing government sponsored enterprises (GSEs) Fannie Mae and Freddie Mac to contribute to the HTF and the CMF based on 4.2 basis points of annual new business purchases, and allocations from 2016 were transferred to the U.S. Department of Housing and Urban Development (HUD) for HTF and Treasury Department for CMF by March 1.  In the coming weeks, HUD will distribute the funding according to the HTF formula to the 50 states, Washington, D.C. and U.S. territories. In 2016, HUD distributed $174 million in HTF funding to states and territories.

The U.S. Treasury Department’s Community Development Financial Institutions (CDFI) Fund will hold a national competition among nonprofit housing developers and CDFIs for the CMF funding.  In 2016, the CDFI Fund awarded $91 million in CMF funding to 32 CDFIs and nonprofit developers.

Based on the GSEs’ most recent SEC filings, Novogradac & Company estimates that the HTF will receive about $219 million and the CMF will receive about $118 million. In addition, HERA also mandates a contribution of about $106 million to the HOPE Reserve Fund, equal to 25 percent of the 2016 Fannie and Freddie allocations.  (The HTF, CMF and diversion estimates include adjustments for sequestration.)  This is expected to be the last year for HOPE Reserve Fund diversion.  If the diversion was not mandated, HTF and CMF would receive $288 million and $155 million, respectively. 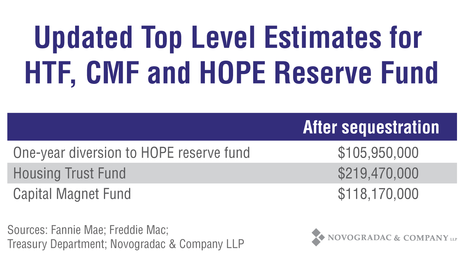 All states receive at least $3 million in HTF funding, so $153 million of the overall allocations, a little less than 70 percent of our estimate is distributed to meet that small state minimum, leaving the remaining $66 million to be distributed to states where according to the HTF formula they would be eligible for more than $3 million in funding.

Using the same HTF formula factors and data from 2016, the following are Novogradac & Company LLP’s rough estimates of the HTF allocation to each state:

The CDFI Fund is expected to publish a notice of funding availability (NOFA) for the CMF this spring. CMF award announcements are expected a few months after applications are received.  Last year, the CDFI Fund made CMF awards in September.

While it is likely the HTF and CMF funding will be available this year, some in Congress may introduce bills to eliminate or divert the funding, similar to legislation proposed in previous Congresses. Furthermore, it has been reported by the New York Times that President Donald Trump will propose to largely eliminate the CDFI Fund in his fiscal year (FY) 2018 budget request, making it unclear what would happen to the CMF.

Lastly, it should be noted that the Federal Housing Finance Agency (FHFA) is the ultimate arbiter of whether the GSEs will continue to set aside HTF and CMF allocations.  The term of the Obama-appointed FHFA Director, Mel Watt, expires in January 2019. However, if Congress were to pass legislation to restructure the FHFA from a single director to a commission-led agency, as has been proposed for the Consumer Financial Protection Bureau (CFPB), or if Watt were to resign, then the status of the HTF and CMF would come into question.