Along with low-income renter households, the middle-class are facing a housing crunch as affordability issues are moving up the income scale, according to the new study from the Harvard Joint Center for Housing Studies (JCHS). The study found that while extremely low-income renters are the most cost-burdened (those paying more than 30 percent of income towards rent), more higher-income earners are having trouble finding affordable rental housing.  America’s Rental Housing 2020 found that the share and number of cost-burdened renters is rising even though, overall, the demand for rental housing appears to have stabilized and multifamily construction remains strong. The report and release event on Jan. 31 detailed the changing trends and provides several reasons for them.

While overall renter demand appears to have plateaued, a closer looks reveals that demand from higher- income households, those earning $75,000 or more, is now the driving force in the renter market. To address this demand, multifamily construction is strong, with the majority of units geared for rentals but targeted toward the higher end of the spectrum. The JCHS reports that the median asking rent for new, unfurnished apartments completed in 2018 was $1,620 compared to the $900 median contract rent for all rental homes in 2018. Higher rents, combined with renter income not keeping pace, and insufficient federal rental assistance – only one-quarter of those who qualify for assistance actually receive it – means a worsening affordability crisis. Homelessness is on the rise as well and there has been an increase in the share and number of cost-burdened households. 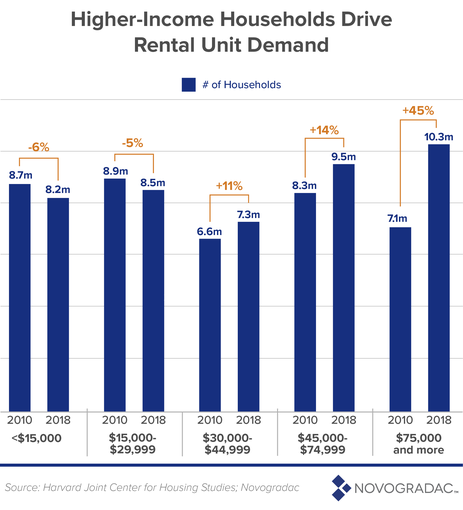 Households that would normally buy homes are remaining in the ranks of renters. In a break from the past, in addition to higher-income households, demand among young married couples and those with higher levels of educational attainment are moving towards renting. For instance, there has been an 8.5 percent increase in the number of married households with children renting. The percentage of families with children now make up 29 percent of renter households and 26 percent of owner households. JCHS also found increases in the “rentership” rates among various age groups that would normally be buying homes. As a result, the report found displacement as higher income renter households are renting units that would have gone to middle-income households and a loss of low-cost rental units removes that portion of the housing stock that would have been affordable to those with lower incomes.

How the Housing Supply Has Adapted

Multifamily construction remains strong;  JCHS analysis of Census Bureau data finds that multifamily starts in the first three quarters of 2019 (just fewer than 380,000 annually) nearly matches the 30-year high in multifamily starts seen in 2015 (397,000). Additionally, since 1980, the majority of multifamily completions have been designated as rentals, with rentals accounting for more than 90 percent of multifamily completions each year from 2012 to 2018. The rental market is still very tight. At 6.8 percent in mid-2019, the national rental vacancy rate is the lowest it has been since the mid-1980s. 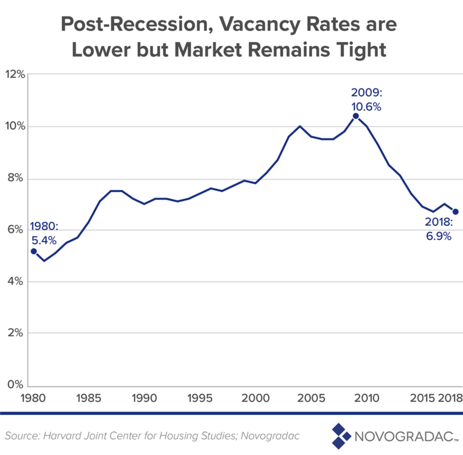 What has changed is that new construction has been targeted to the high end of the renter spectrum, for a number of reasons. Yes, rental rates are impacted by the increasing costs of new construction – the price of commercial land has doubled between 2012 and mid-2019, and during the same time the Construction Cost Index, which measures cost of labor, materials, contractor fees, and local taxes, has increased 39 percent, according to the JCHS report.  But, changing renter demand means the type of units supplied will also change. This has contributed to increases in overall rental rates.  Larger units are being brought to market to accommodate demand from families, and more amenities are being offered to attract higher income renters, which translates into higher rents. The location of new construction also impacts rents; the urban core has seen resurgence in rental construction as the majority of new rental construction permits (54 percent) have been issued in central countries in the nation’s largest metros.  Changing supply and rising rents mean many are still spending too much on housing. 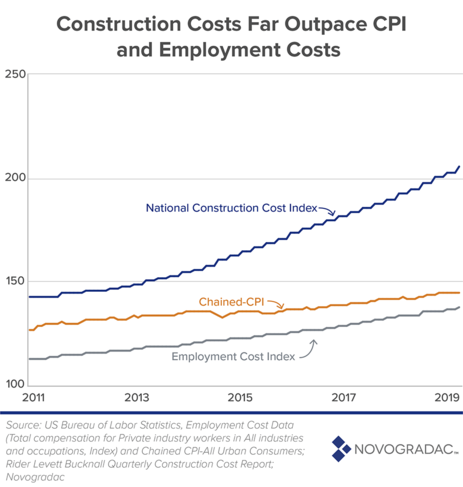 The study found that while the largest increase in cost-burdened households was among middle-income households, as detailed below, the lowest income households still face the greatest affordability challenges. 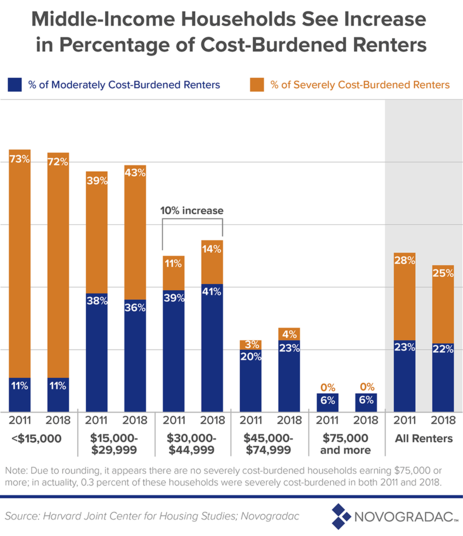 Even with a strong economy and construction sector, with supply addressing the higher end of the market, JCHS says those at the lower end and in the middle find their basic housing needs going unmet.  The report finds that 47.5 percent of all renters are cost-burdened, with this figure including the 25 percent of renters who are severely cost-burdened (paying more than 50 percent of income towards rent). Supply cannot keep up with the demand for affordable rental homes and those at the lowest end of the income spectrum continue to struggle the most – 82.8 percent of renters earning less than $15,000 a year are cost-burdened. What is different now is that middle-income renters are seeing their cost-burdened share rise. The study found that households earning $30,000 to $44,999 and $45,000 to $74,999 had the largest increase share of cost-burdened households, rising 5.4 and 4.3 percentage points from 2011 to 2018, respectively. 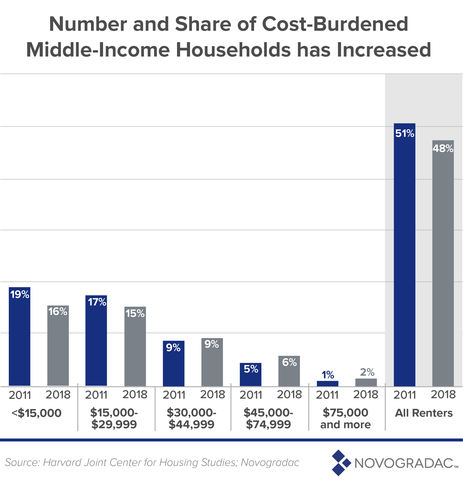 In this atmosphere, where the market seems to focus on addressing demand at the higher end, the preservation of existing affordable housing is more important than ever. Unfortunately, the rapid disappearance of low cost units, those renting for less than $600, puts an even bigger strain on extremely low- and low-income households. JCHS research found that nearly 4 million low-cost units were lost between 1990 and 2017.  Several possible reasons for the loss of these units were discussed during the release event and in JCHS research: the difficulty of having the market build low-rent homes; the lack of “downward filtering,” where higher-rent homes shift to lower rent levels over time (due in part to the age and quality of the homes); and, “upward filtering” of rental homes, where low-rent homes are shifted to high rent homes.

What does this mean for policy? Efforts to preserve existing affordable rental homes must be advanced.  Further, the supply of affordable rental units must be increased. Numerous provisions of the Affordable Housing Credit Improvement Act (AHCIA, H.R. 3077, S. 1703) would address the challenges highlighted in the JCHS research – a 50 percent increase in low-income housing tax credit (LIHTC) allocations; expanding private activity bond recycling; setting a permanent minimum 4 percent rate for LIHTCs used to finance the acquisition of property or generated by tax-exempt private activity bonds; the increase of the population cap on difficult to develop areas; and, the 30 percent basis boost for rural areas. Analysis shows that implementing these provisions could mean hundreds of thousands of new affordable rental homes. Support for the AHCIA is growing – at the time of this writing, there were 210 cosponsors for the House version of the bill and 37 sponsors in the Senate.

Where the AHCIA focuses on addressing the affordable housing needs of moderate and low-income households, findings from this new JCHS research may renew interest in previously introduced legislation aimed at the middle-class. Using the LIHTC as a model, the Middle Income Housing Tax Credit of 2018, introduced by Sen. Ron Wyden, D-Ore., aimed to encourage developers to build affordable housing for households earning 100 percent or less of the area median gross income. A 15-year tax credit for 50 percent of qualifying costs, or a minimum 5 percent per year, was proposed for qualifying properties. Wyden proposed similar legislation in 2016, and as more middle-income households begin to face rental housing affordability issues, Wyden is expected to reintroduce this legislation soon.

The JCHS panel noted the country’s housing issues are garnering more attention by policymakers, which is good news.  During the panel discussion, the fact that housing has become a major platform issue for the democratic presidential candidates (Novogradac has been tracking the various housing plans released) is promising. In addition, the idea of housing as infrastructure is gaining momentum – during a recent infrastructure hearing both House members and witnesses advocated for the inclusion of affordable housing in any infrastructure discussions. The interconnectedness of housing and schools (stable housing, stable schools), the economy (“housing is where jobs go to sleep at night”), and indicators of good health all means one cannot thrive without addressing the other and addressing the housing crisis goes beyond just having an affordable place to live.

ESG Investing: Where it is Now; Where it’s Headed; What to Do
Everything You Need to Know about State LIHTCs in 2022
Knowing What Makes a Property Unique, Distinct is Vital in the Preservation of Affordable Housing
END_OF_DOCUMENT_TOKEN_TO_BE_REPLACED